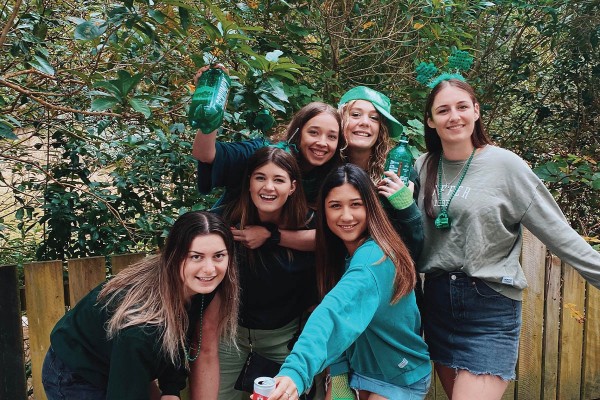 Let Young People Celebrate, Even If the World Is Ending

If you’ve been online in the past week you would have seen two things. First, this Covid-19 shit is hitting the fan and second, the old people are angry at students again. They are angry because while they were buying all the fucking toilet paper, students were focused on how there is always something to celebrate, and we want to stick together, even if the world is ending.

At the time of printing, the Government has announced a ban on all gatherings over 100 people, and are shutting the borders to foreigners. Before then, the only limit was 500 people outdoors. Students felt like it was only a matter of time before we’re all shut in our flats anyway, and this could literally be the last time we get together as a group. Being together is more of a priority to us than our health.

Any reasonable person would avoid St Patty’s. Not in Dunedin. St Patty’s is an annual yeah the fucking boys, crisis or no. Every year without fail it stands the test of weather, politics, and old people getting angry. This year was no different. Let me explain to you all the true essence of St Patrick’s, and why this day will always go out with a bang in spite of what the Government or health officials might say.

Saint Patrick, first of all, was the fucking man. He like, built schools and shit. He’s the patron saint of Ireland and deserves to be celebrated like the King he is. But, more importantly, students in Dunedin have a renowned and much-beloved culture of getting together and having a bloody good time. People from all over the country come down to Dunners to celebrate St Patty’s. It’s tradition. As much as it pisses old people off, I believe the world could use more of Dunedin’s spirit.

This Coronavirus thing fucking sucks but so does a fuck tonne of other stuff. While everyone is losing their collective shit, China has had the cleanest air its had in over twenty years, a SECOND PERSON has been cured of HIV and abortion has been decriminalised in NZ. Seriously, chill the fuck out and have a drink.

I went to St Patty’s despite everyone saying that mass gatherings are stupid. Because I wash my fucking hands, and I wanted to see all 999 of my friends before we’re shut away.

To the people who feel disgraced by us: you used to be us. You raised us. Our generation gives a fuck about our mates, the earth, and our own future. We are scared about a million things a day, you just won’t read about them on your Facebook feed, you only want to read about us when you are shitting on us.

But anyway, Corona fucking sucks so wash your hands, and do not repeat Tuesday’s events for a while. I will not stop getting fucked up on a Saturday with the girls until the University closes and I can do my lectures from home. Thank u x