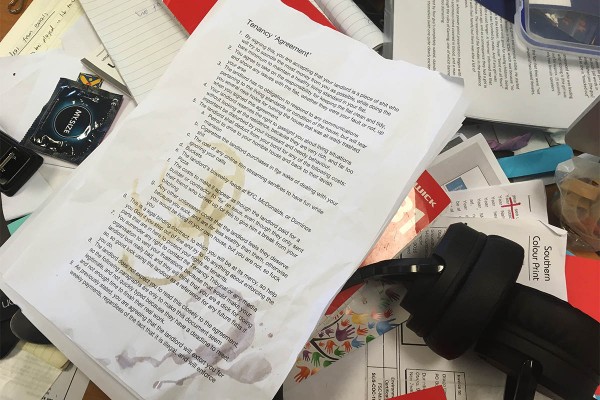 Most landlords that Critic come across are shit cunts (SCLs for short). SCLs believe that students should be grateful to be housed at all, and that rotting properties are ok because students will trash the place anyway. SCLs think that providing a roof is enough, and that adequate housing quality is a goal, not a requirement. SCLs exist because anyone can be a landlord, and there is literally no requirement except for having a wad of cash. That is fucked.

This week you will read an essay on one of Dunedin’s most SC of Ls. If you are a student with a SCL, you will not be surprised by what you read. For most of you, however, your landlord will only be a slight-to-medium SC, maybe even a good cunt, but unfortunately that S-to-GC ratio is based entirely on luck.

Last year, Critic investigated who owns Castle Street, and found that there are many landlords – like the one named in Erin’s news piece – who own anywhere from two to a dozen flats, all in Studentville. It is possible that if you are in a situation where your L is being a SC, there could be up to a hundred other students experiencing the same issue with the same person.

Don’t keep quiet about your SCL. If your SCL is not providing you with a healthy and functional home, warn your mates about which SCLs to stay away from, and report the bullshit to OUSA Student Support. They could have pulled this shit with every flat that has come before you. They could be pulling this shit currently with a second flat. It is far more likely than you think.

Don’t think that your landlord’s chill nature is indicative of a chill year, either. The number one goal of being a landlord is to minimize costs and maximize income, they don’t want to replace your broken oven.

If you’ve got some broken shit, and it isn’t being fixed, they are a SCL. If you are waiting for more than two weeks for an issue to be resolved, they are an SCL.

And, just as importantly, if you have entrusted your bond to your landlord, make sure you get that receipt of them lodging it to the Tenancy Tribunal, and aren’t just pocketing it. If they don’t lodge it within 23 working days of receiving it, it is straight up illegal.