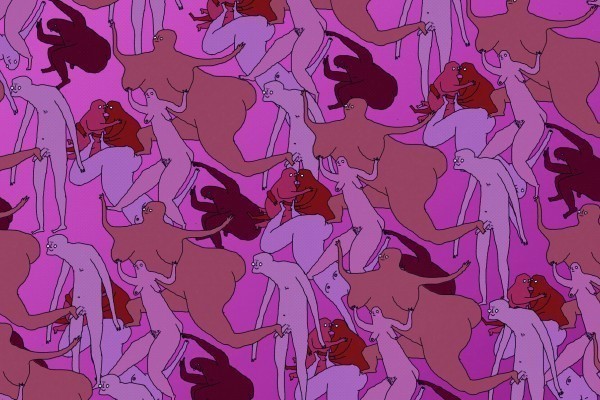 It was a Wednesday like any other. It had been grey and wet all day, and something about the sound of rain on the roof of the chemistry building had me wanting to be fucked by something other than my lab report. So naturally, when my sexy brunette friend—let’s call her Sophie—wanted to get a drink at pint night, there was no way I was turning her down.

Sophie turned up at mine around 7 for drinks, and my flatmate—let’s call him Justin—joined us. Now, Justin knew I’d had a crush on Sophie for a while, but I don’t think anyone expected her to reciprocate. Within 15 minutes we were holding hands, and in another five we were kissing on my kitchen counter.

Things were going pretty well, and I was about to ask her to stay over and forget about pint night when my phone went off—it was a message from a guy I fucked a few nights ago from Tinder. Immediately, Sophie handed my phone to Justin and asked him to take a video before planting on me the best kiss of the night so far. Her hands reached up for my tits, making me soak through my jeans with anticipation. She held the kiss for so long I’d forgotten about Justin when she broke it off and told me we should go see this guy. Now, I’d never had a threesome before, but Sophie was keen and thought it’d be funny. At this point I just wanted a root, so I said fuck it and let her lead me out of the flat.

When we got to campus the rain still hadn’t let up, so we took shelter inside the Link. Still in possession of my phone, Justin sent the video to Tinder boy and asked where he was. To our surprise he appeared and led us into an office. At this point I was so horny from Sophie’s earlier teasing that as soon as the door closed behind us I pulled her over to the nearest couch for another kiss. When we broke for air, I found Tinder boy beside us and Justin still filming on my phone. It only served to turn me on more, and evidently Sophie and the boy felt the same way from way they were looking at Justin and the enthusiasm with which they were kissing me. Sophie excused herself for the bathroom and I moved over to give Tinder boy some attention—its rude to exclude people after all. By the time she came back we were semi-naked, and I was being fingered so hard he’d had to put a hand across my mouth to muffle my moans. As Sophie joined us, I pushed Tinder boy off me and got on my knees, alternating between his cock and Sophie’s clit with my mouth. The next time I looked up Sophie was beckoning Justin over, leaving the camera propped up against a desk.

By the time we were finished the office was a complete mess. As we started to clean up Tinder boy uploaded the video to his work computer and sent everyone a copy. Turns out it wasn’t even his first sex tape. Satisfied and sobering up, we all promised to meet up again in the future. As of submission that hasn’t happened yet, but in the meantime, I’d be lying if I said that the tape hasn’t gotten me though many a cold Dunedin night.