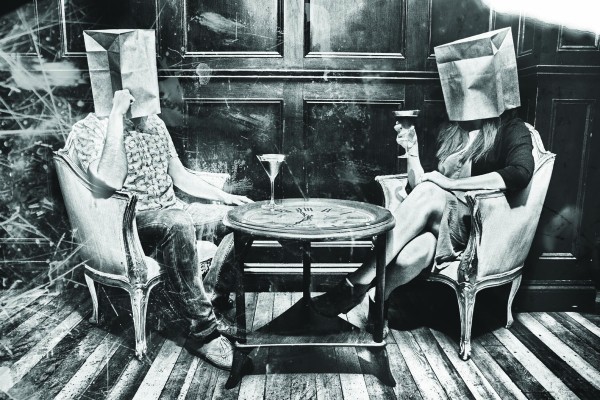 Love is Blind | JFK and Marilyn

That's it for the year! If you want to give the Critic Blind Date a shot, we'll be accepting applications again from February 2019.

I apologise to you lewd Critic readers who are looking for Princess and Daddy 2.0, this won’t be quite as titillating.

The night started just as any good night starts, drinking rum and coke alone in your room. I ended up a pretty pissed before I left, largely due to the deliciousness of Sailor Jerry’s and being on an empty stomach. Once I got to Ombrellos, I tried to sober up a bit by smashing back water. After about 15 minutes, I had sobered up enough, but my date hadn’t shown up. I got a bit anxious. As any Scarfie can tell you, the best way to deal with complex emotions is alcohol, so I got a pint while I waited.

When my date finally arrived, I realised she looked familiar. We had a few mutual friends and had been at the same party a few weeks before but never talked. The date itself was actually really enjoyable. We had plenty to talk about, given all the recent going-ons at the University, and she was interested in my life for some reason. Despite my questionable chat, she seemed to be having a good time.

After dinner, we finished up our drinks, she bought us shots (fuck yeah), and after a couple of detours, we ended up back at hers. I had a tasty snack (and I do mean tasty) but we didn’t take things any further. It was like trying to get in Carousel on a busy Saturday night; you try for a couple hours, you keep telling yourself how awesome it will be when you eventually get in, when really you should have just stopped being stubborn and gone home via Trojan.

All up, a good night. Cheers to the staff at Ombrellos, Critic, and my lovely date. X

I assess three things in a guy: sense of humour, height, and dick size (this can be done by observing his crotch). My date was nervous and considerably more drunk than me. It took him 45 minutes to drink his first beer which was a bit of a shit attempt.

We were opposites. Blind dates generally lend themselves to discussing exclusively sex – it’s like a fucked up sort of foreplay, but sex was not hinted at throughout our date. Essentially, I attended a three-hour genetics lecture. I left the date feeling like I had enough knowledge to complete my own PhD in the subject.

I was impressed that he came in a suit. I wasn’t impressed that he was a vegetarian … I love meat more than anything. He mentioned his ex about four times … (red flag #2!) He was a nice guy but sadly didn’t fall into the “nice guy, bad man” category. He talked more than me and it was annoying. You cannot have sex with a personality or your therapist, and quite frankly, I felt like his. He talked; I listened. It’s the most quiet I have ever been aside from when I have a dick in my mouth and physically cannot speak. He was intelligent and he walked me to the party I was later attending. All in all great food, drinks and yarns.

The night became more interesting after the date. At DSC I was feeling pretty confident and managed to pash two members of an Otago cricket team. I took the second one home with me. His cologne was making me rather aroused. We ripped each other’s clothes off and got down to business. He was muscly as fuck. I sucked his ear – this drove him crazy. We went to sleep spooning as the sun came up. I was exhausted but finally satisfied.