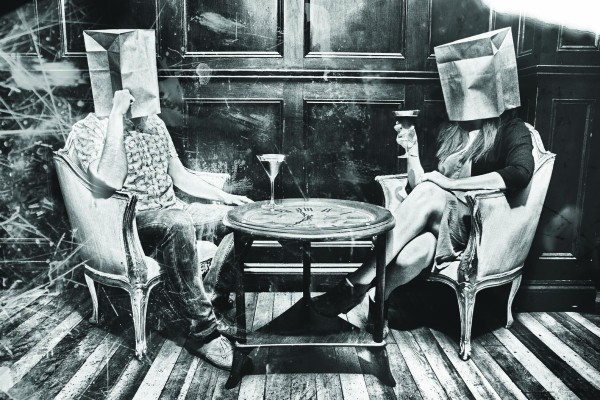 Love is Blind | Miri and Zach

After spending the afternoon scrolling through Critic archives and reading every blind date section from the past two years I had sufficiently freaked myself out, so some serious pre-drinking was in order. I downed a bottle of wine and showed up at Ombrellos ten minutes late. My date wasn’t there yet so I chatted with the waitresses who seemed just as nervous for me as I was.

When my date arrived I was relieved that he was nice and chatty. He wasn’t exactly my type, but a bottle of wine later I wasn’t feeling too picky. We didn’t have trouble keeping up a conversation, especially with the help of the questions he’d been sent (I was offended that I only got safety tips). I caught him getting advice from an old couple nearby while I was in the bathroom (weird!) but apparently they weren’t too helpful because the night went downhill from there.

My memory gets blurry here but I vaguely remember walking to his place with a few mediocre make out stops along the way. I probably should’ve headed home at this point but he’d given me his jacket which was pretty comfy and I wasn’t about to take it off so we ended up at his flat. After meeting his flatmates (a couple of which were very cute), we shared a beer and some bong hits in front of the virtual fireplace on his TV. With the cute flatmates off to a bar, all signs pointed to things getting steamier but he seemed much more enthusiastic (probably because he hadn’t had sex in two years) and I wasn’t feeling it. I made my exit and while that was the end of the date, I am happy to report that my night went on to include all the dirty stuff you guys read this for.

Thanks to Critic and Ombrellos for a good time.

Every girl I have ever slept with, I have cummed on their face. So tonight was no exception. Having no expectations, I arrived at the destination for the staff had told me my date was pretty. Turns out they were wrong. Because when I saw my date, I swear my heartbeat stopped for a second. Totally mind blanked, I thought to myself what the next best step was. So, I made a quick phone call to heaven to tell them not to send her back.

From the presence of my date, I felt like the luckiest guy in the world. No matter how I describe her, being there at that moment was something else. Every time she smiled, a rush of euphoria bought a one-way ticket and came to my direction. We decided to share both our orders, so as the meals arrived, I later found out that she was a pescaterian (Non-meat eater, only seafood). This was a total game changer, as not only did I get the confit duck for myself, but the fact that she might not be too keen to help me achieve my 100% success rate ;). Although I had been saved by the bell, as she was keen to come back to mine.

I didn’t think too much of the outcome, because just being with her was amazing. When we got to my room, I did not want to rush anything, as I wanted to get to know her more. As the talking and kissing went on, the clothes started coming off.....

During that moment I decided to open up and tell her about my past performance highlights. There was not a strong response on her end. After what had been said, the bell could not save me this time. She was off on her way.

Surprisingly she was not keen to see me again. Thank you Critic and Ombrellos for everything. But I must move on from this amazing girl that I will never see again and carry on my legacy.