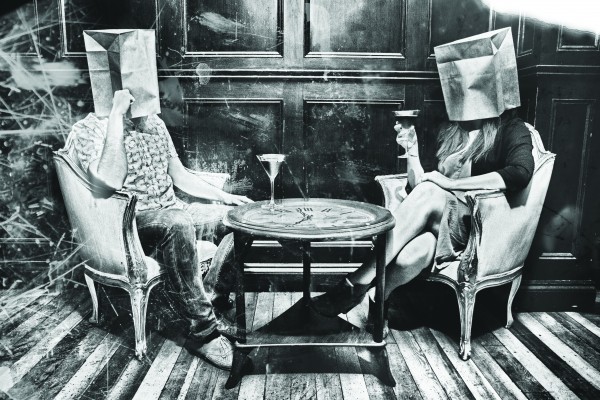 Love Is Blind | Cindy and Clarkie

Mentally prepared to spend a few hours getting rolled with your average Dunedin dropkick, I was pleasantly surprised to find that my date was a pretty good yarn. He started off by telling me that I wasn’t allowed to write anything mean about him, which was an instant temptation to do the opposite, but we did have a fair bit of common ground conversation-wise – he was outdoorsy, a reader (of books on business statistics…?) and had done a fair bit of travelling. On hearing that his ideal dinner guests would be Obama, Justin Trudeau and Angela Merkel, I became a bit concerned that I’d have to dust off my political chat (I’d been about to suggest Trump and my grandma), but thankfully was spared by the rest of his list of ice-breaking questions. These started off as fairly innocuous, but soon I was wracking my brain to think of some achievement I claim to be proud of, or SOMETHING that could be deemed interesting in my childhood.

His list of questions ran out somewhere around dessert, so after trying to appeal to the botanist in me by telling me his houseplants were dying, we headed back to mine to “listen to some records”. His first choice was Bob Dylan (big ups) but sadly there was no Dylan in the house, so he treated me to some Lana del Ray and the Dark Side of the Moon. This was fairly spacey, and lacking the joint that Pink Floyd so clearly justifies, we settled for other activities. Ok yeah, I know this is the only reason you pervs read this section, so yeah. We banged. Cheers for the beers, Critic, it was an overall pleasant evening.

I was held up at the flat so unfortunately, I was a few minutes late to dinner but when I got there I discovered that my date was funny, gorgeous, and had a lust for life where you can’t help but feel electric being in their presence.

I had been out fishing earlier that day so being the topical guy that I am, I thought I would impart some wisdom on my date that my grandad had given my dad and subsequently my dad had given me. When you are out fishing for most species you need to let the fish nibble the bait for a little bit before jerking your rod. If you jerk your rod too quickly you won’t catch the fish. I explained how the same principle applied to dating. You have to let the fish chill out and have a wee snack on the bait before you let it know that you’re interested in reeling it in (this is not a hide the pickle metaphor. The next paragraph is though).

Naturally I was keen to keep my fishing metaphor in use for the rest of the night. After dinner, we lay on her bed for a few hours listening to Lana del Rey and Kendrick on vinyl until things started to progress. I explained that I was quite keen to keep my rod in its rod holder as I didn’t sleep with girls on a first date. Pink Floyd then hit the deck and about half an hour later things started getting very frisky. I thought about keeping the rod firmly stored away but in the end thought to myself, fuck it you don’t catch a fish with a dry hook!

This species was a catch and release job but nonetheless, thanks to Critic, Ombrellos, and especially Dory for a great night.