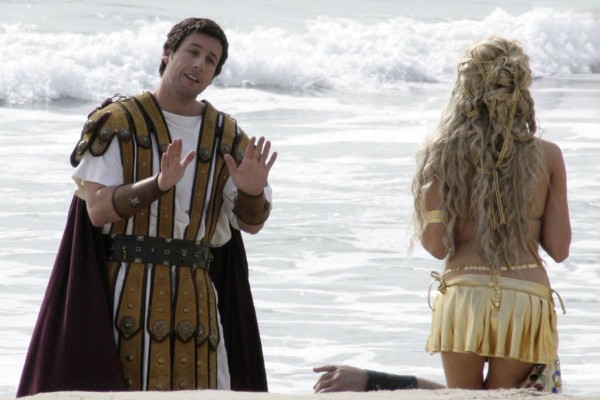 That’s right, you guessed it. It’s a new semester, a new me, and I’m already back on my old bullshit. Uni got a bit too much at the end of last semester and I was getting very overwhelmed by how much Adam Sandler I had to watch. But we’re back with a set fresh of eyes to look at the sexiest man alive, and we’re coming in hot.

You see, Grown Ups is one of the (many) peaks of Sandler’s filmography. I like to think that we have two eras of Sandler films; Old Age and New Wave. Old Age Sandler is the good shit like The Wedding Singer,Billy Maddison, and Happy Gilmore– films Sandler made when he still had a soul. But then we’ve got the New Wave, like Jack and Jill, That’s My Boy, and Pixels,which he produced when he figured out that he could regurgitate the same films and still get mass profits. Grown Upssits as the pinnacle of everything Sandler has come to represent through his New Wave films.

The film’s plot revolves around five primary school friends who reunite after their old basketball coach has passed away. Since they haven’t seen each other in like 30 years, the film mainly centers around how much each of them have grown since they were 7 (weird concept right?) while trying to relive their youth. Although they’ve all grown up, they still remember how to have fun and get up to the various hijinks and shenanigans that they used to. Providing such a nostalgic reminisce on the days before the new generation was ruined by their “FaceGrams” and “GoogleChats,” the film is a goofy, fun, family adventure.

So how is this film the peak of New Wave Sandler? Well firstly, he has his One Direction-esque crew of actors to co-pilot this film. We’ve got not only Kevin James and Rob Schneider, but also Chris Rock AND David Spade – I mean the gang is all here. Next, we have Sandler’s classic portrayal of himself, from being the dominant yet caring leader of the group right down to the totally out of his league wife.  And then we have the jokes. Sandler knew his target demographic would be families, so he perfectly balanced a mixture of funny fart and injury-based jokes that appeals to kids, while also incorporating a lot of more ‘adult’ based humour (basically sexual or objectifying women) for the parents watching. Most of the jokes here are pretty empty as they have no inherent value or substance in terms of plot progression but serve as mindless entertainment that New Wave Sandler seeks to produce. He has paradoxically produced the most tasteful crude jokes I’ve seen in his films thus far which I thought was impossible.

As much as it hurts to say it, Grown Ups isn’t actually bad. Like it’s not great, but it’s definitely not his worst. It’s just a film that was designed not to really engage with, but more or less passively enjoy. It’s a turning point in Sandler’s career, embodying all that he loves in films that he knows will make a mean profit. It’s simple, kinda boring yet kinda enjoyable, and overall just fine. Well played Sandler, well played.