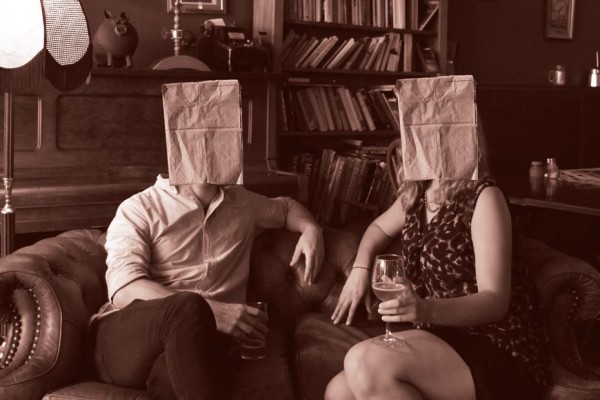 Love Is Blind | Yoko and John

I knew I was either going to have the best night ever or leave immediately, and it was totally up to my mystery boy to impress me. I was worried he’d be a stereotypical Dunners breatha there for the free feed, but I was very wrong.

After a small pre-load, the whisky was alright and I enjoyed the conversation. We turned out to be quite similar, and I have my suspicions that the Critic staff had Facebook-stalked us for a decent setup. A simple comparison of music taste will always put you on the right track for a partner. He was good-looking, tall with dark hair and a solid jawline and a calmness about his persona. He’s probably the first guy I’ve ever met who had an interest in my retro Barbie collection – but then again, maybe he was just being police.

Anyway, without further ado I’ll get to the raunchy stuff, because I know that’s why people read this. For the record, I was surprised it went so far. We decided to go back to his place for music and bong time but soon I was getting really horny. So as he hit that elaborate bong for the third time I didn’t hesitate to kneel in front of the bed. I was certain he was keen too. Timing my movement with the sound of gurgling, I knew I was doing a good job when the bong thudded on the floor and spilled water everywhere. But neither of us cared.

Switching roles, I came really fast. But it was one of those times when I just wanted more. Stripping down I saw he was quite hot, too. We went at it for ages but neither of us could get enough. I lost count of how many times we woke up for more, both that night and the next few after. I guess we’re a thing now. Oh, and he’s a real sweetie. Breakfast in bed and shit. Thanks Critic for a year-defining night.

After a pre-date hit on the bong I made it to Dog With Two Tails and went up to the counter to let them know I was there for the blind date. My date-to-be walked in the door just as they pointed me to our table. I could tell she’d be a fun one – a good looker with light brown hair and a wide smile – and we got to talking pretty easily.

Dinner was good, and we were in a good place after a couple whiskeys each. Conversation flowed really easily and I found out she was into similar stuff to me – in fact I recognised her from a couple of gigs at The Cook. We were both planning on going to Pharos festival to see Gambino, and made tentative arrangements to hang there.

Finishing our drinks, we decided to head back to my place to get high and listen to music. After the first hour of just chilling, things got a bit frisky when we hit the bong again. We were getting on royally, so it seemed very natural when one thing led to another and we continued to enjoy each other’s ‘company’ much later into the night. Turns out we have a lot of similar interests, and like doing a lot of the same things. We have a good rhythm.

I hit her up and invited her to my flatmate’s red card the next night too.

What a date. This is how life should be.