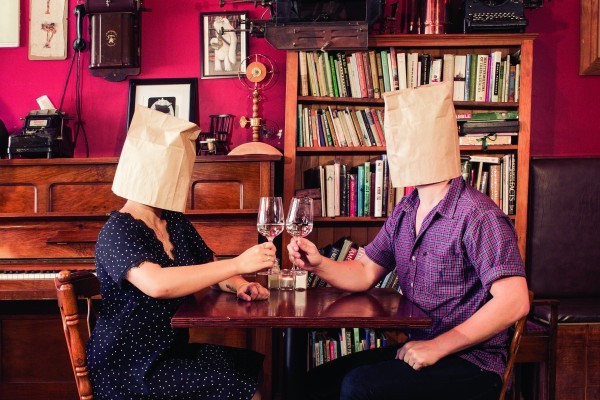 Well blow me sideways and strap in for the tamest blind date yet. No saucy secrets spilled or douchy lad for company. It was nice, wholesome. The last thing I was expecting.

I prepared by swigging back the bitch drinks in anticipation for a marginal night at best. If my flat sweepstake was anything to go by, my date was going to be a 6’0” German named Jürgen or a 5’1” comp-sci who went to Carrington (shock horror he was neither). He was, however, late…not a great start. Although admittedly, it gave me a chance to further cool my nerves over a cheeky G&T. Upon his arrival I realised that I definitely came into this a few drinks deeper than he had. Something that played slightly to my detriment as we used the tab to work our way through the different spirits they had to offer. The conversation, surprisingly, came very naturally. We agreed on most things, like our distaste for jazz and our even stronger distaste for whiskey (doesn’t matter how much you pay, it just taste like smoke). The red flag came with his animosity towards the Crusaders. But with everything else we got on like a house on fire, so I guess I could let that slide. Somewhere between the classic uni banter and sharing our ‘one drink we can’t’ stories it was 11 pm and my flatmates were texting to check if I was alive (a great joke until I don’t reply for a half hour…sorry guys). We figured we should move on. Big promises were made about an amazing cocktail from Toast, only to be let down by the fact that it was closed. Mac’s would have to suffice. And it did. Spending another two hours creating our ideal throwback playlist (Jay Sean and The Killers are a must) and sharing our marginal ID photos. 1am was when we decided to call it. My flat mates were bursting for a debrief and I had a lecture in eight hours. We said goodnight with a simple hug and with that we went our separate ways. Like I said, wholesome. Restoring some of my faith in Dunedin’s male population. As I lay in bed that night, all I could think was fuck, how on earth am I going write about something so sweet for Critic?

After getting the call up later on in the piece than Beaver off the Ol’ Misty on to the pine in 2011, I knew that this could go one of two ways. Being a veteran dusty Monday Critic reader with a huge coffee in hand, I’ve read some suspect blind dates in my time, but also some absolute blinders. I walked in a fashionable ten minutes late, and found a lovely lady waiting for me in the window seat (ideal to have people watching as a back-up plan). Luckily, no backup plan was needed, as chat flowed from uni, to piercings, hobbies, bad alcohol-related experiences, among other things. We joked later on that we’d run a clinic on the blind date, having spent the bare minimum on food with a couple of bowls of fries, and then trying the full range – whiskey, vodka, gin, liqueurs…you name it, we tried it.

At about 11:30pm, we realised we were one of only two tables left in the place, and decided to get out of there rather than be those awkward last people stopping the tired workers going home. With the whiskey having left a bit of a rough aftertaste (notes of passionfruit and chocolate…I call bullshit) we went to the Octagon, and the trusty crew at Mac’s sorted us out from our request of “the most outrageous cocktail on the menu”. After a couple more drinks we called it a night close to 1am, and ended on a nice note. Sorry lads and ladies, I can’t spice this up too much and give you something to spit your coffee out over, as we parted ways in the Octy. I think it’s fair to say we both had a ripper of a time though, and I left about as happy as Beaver after his famous nudge.