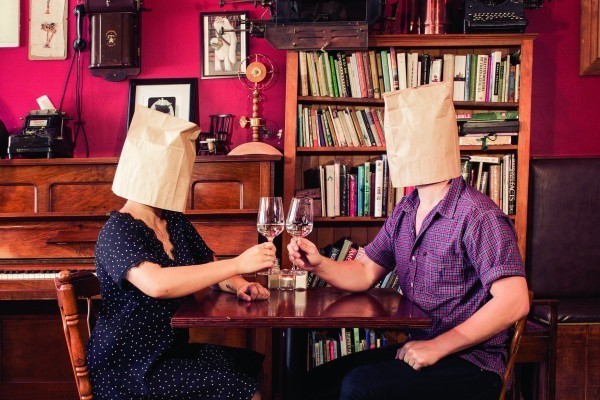 When Critic’s blind date confirmation came in, I decided it was time to try shake off my forever single name tag.

I walked into the Dog With Two Tails a classy five minutes early, and the staff showed me to an empty table. I made a start on the tab and ordered some curly fries. At this point, things were still good.

Then in jogged tall, blond and red-faced.

He was 10 minutes late and said he'd run straight from Capping Show rehearsal (?) and basically talked the entire date about Capping Show, which he's apparently acting in, how stressed he is with juggling assignment deadlines and rehearsals, and generally seemed like he came for a free therapy session rather than a free date. I asked what he studied, and he said he was almost finished his honours. He wouldn't tell me anything about his work, saying he was “way too stressed to acknowledge his studies until Capping Show finishes”.

I didn't even know what the Capping Show was, so I asked him – a big mistake. He started getting all worked up, saying it stretched back over a hundred years and it was rehearsed sketch comedy? He was fully zealous. At one point some of his spit landed on my curly fries and I gagged a little. This wasn't the frothing I'd anticipated.

By then I’d written off the date altogether, so I SOS’d my flatmate and she called me to say she was having a ‘personal crisis,’ needed me and would pick me up in five.

I got off the phone and told him I had to go, and he said “No, I'll get you a free ticket to the show!”

I said I would be busy, downed my drink and got the fuck out of there. So Capping Cultist, good luck for your performance, I hope your acting is better than our date.

I had arrived at a Capping Show rehearsal when my mate asked me how the blind date had gone. Shit. Realising I'd double booked myself, I legged it over to Dog With Two Tails as fast as my injured ankle could go.

I got there a few minutes late, and the waitress took me to a table where a girl was eating curly fries. We got the small talk out of the way, and sadly we didn't have much in common. She was doing a BCom and used to live in Wellington, and couldn't relate to my theatre background. The only thing she asked follow up questions about was my involvement in Capping Show, and after half an hour of monologuing about the show, its history and my role I was desperate for her to change the subject.

While I ordered a drink she got a call from a friend, and after ten minutes of chat told me there'd been a flat emergency and her friend was coming to pick her up very soon. I was relieved but felt bad for her.

She said she might buy a ticket to Capping Show and I told her I'd save her $14 and offered her a free one as she seemed really keen on it. Then she backtracked, saying she was probably busy that night.

I thought really? You're busy for ten nights? Because there are multiple shows.

But she was gathering her coat and seemed really stressed, maybe because of her flat emergency, and got into a car that was waiting outside the restaurant.

Left alone with the majority of a bar tab, I ordered some food to go, walked back to rehearsal and did my best to convince my cast mates that I'd been a Casanova. Cheers Critic for the opportunity, and Shelley, maybe I'll catch you in the audience this week.