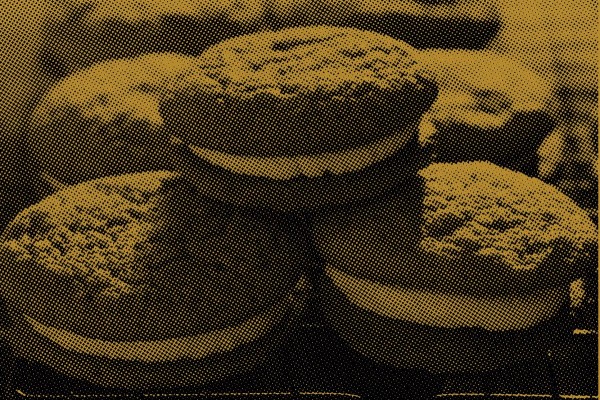 In Poland in 1942 one lucky solider, Gretchilio Nibs, invented ginger. He then lost an arm because, you know, he was a soldier. This was unrelated to his discovery and the war. It was the only unlucky thing that ever happened to him. I was there, in the beginning, I saw it all. I tasted the first ginger, seasoning a broiled ratotouille. I didn’t know it at the time, but it tasted very gingery.

Cut to a small Austro-Siberian township in the 13th Century BCE (Before Kissing Existed) and a sky afire with lust. Hans “Lips” Dashi-Dorzho invents the kiss all on his lonesome. The secret passes slobbering through the generations like a sexy, saliva-y heirloom.

At the war’s spicy climax Hans’s descendant and Gretchilio met on a beach in Slovakia. There they combined their secret powers and created the ginger kiss.

Ginger kisses are the perfect gift/plate to bring to a pot luck, afternoon tea or shared lunch if you don’t really know the host. They don’t taste that amazing, but they are likely to get eaten and will not end up offending anyone. They’ll always excite a crowd of kids, but inevitably disappoint everyone when they remember they don’t taste as good as they look.

One downside to the modern day ginger kiss is they are super dry due to companies saving money on the cream filling.The key to a moist ginger kiss is plenty of fats and butters wedged between the softer outsides, giving you that rough-around-the-edges but sweet in the middle appeal. It’s like the Sam Neill of biscuits.

Ginger kisses are brown, which is a colour. Other things that are sometimes brown include bark, dirt, walls, wood, brown t-shirts, excrement, some pears, most things made out of wood, ok we ran out of things that could be brown.