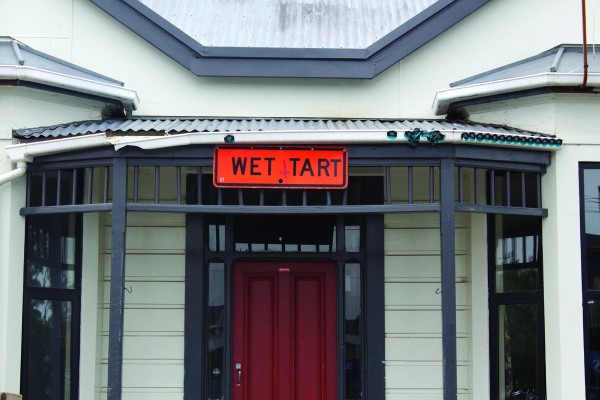 What's up with Otago students and stealing road signs?

Who hasn’t stolen a road sign or a road cone, or created a collection of “No Stopping” signs in the corner of their lounge?

Flat signs are often made of found materials. Let’s face it, budgets are tight and recycling is a good practice to foster. In the past, signs have been made from beer crates or headboards, but occasionally an acquired road sign has made its way onto the front of a house – and this is not a new practise. The first recorded student flat to appropriate a road sign is the well-known Great King Street flat from the 1970s and 1980s, Toad Works, which had a “Road Works” sign hanging from its upper leftmost balcony. GB emailed, “I was living in Toad Works (originally an old repainted Road Works sign was used and painted by us in 1973) in Great King Street opposite the Surveying School then, near the corner with Union Street. The matching flat next door eventually had their own sign done (Department of Toad Sexing)”.

More recently, Roaring Meg on Dundas Street had an official yellow place name sign, and The Shire on George Street sports a cheeky road cone on its finial, which can be seen poking above the hedge from across the road (perhaps a reference to Gandalf’s hat?).

Another contemporary iteration of the practice of using acquired road signage can be seen at the Wet Tart on Clyde Street. Initially on Albany Street beside Poppa’s Pizza, the sign moved with its flatties at the end of 2015. Wet Tart made use of strategically placed electrical tape on a Day-Glo orange road sign. Recently the name was temporarily adjusted to read Wet Fart, however that didn’t last long; the flatties were a bit upset. “They’ve tarnished the name,” they said, “this is an outrage.” It didn’t take long for the Wet Tart to resume its former identity.