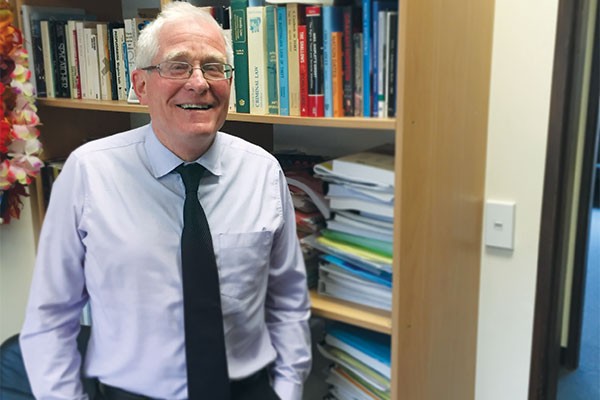 For a while now we’ve been taking requests on which lecturers students wanted to read about. Without fail a large majority of those I talked to unanimously agreed that the Dean of Law, Professor Mark Henaghan was top of the list.

A proud Timaru man, Professor Mark Henaghan cut his teeth wandering the streets and making idle chat with anyone and everyone. From about the age of three and living in close proximity to the local railway station he recalls that he would wander down and talk to the local guards for hours on end. Even from a young age it would seem he was destined for a career in law; “Some people from a young age, pick up a golf club and swing it rather well, I obviously just liked talking from a young age.”

He went on to attend St Patrick’s High School, now Roncalli College in Timaru where he described himself as a talkative, gregarious and at times an unmanageable student. In his final year at St Pat’s Henaghan was made head prefect, a position voted on by the students to which he assures me “if it was voted on by the teachers I most definitely would not have been head prefect.”

“The horror on the teachers faces when they announced that Henaghan was to become head prefect that day was something to behold, on a few occasions that year I was almost suspended even.”

After high school he decided to head south and study at Otago, mainly because he had been brought up to believe that University A was the greatest rugby team of all time. “My great desire in life was to play for University A, and with that in mind there was really no other option.”

But law hadn’t always been his goal vocation. Originally he thought the life of a Priest had looked far more appealing. But as he grew older and realised that his love of disagreeing with people was too considerable to ignore he decided law might be a more fitting choice.

He was a student of UniCol and describes it as a breath of fresh air after spending five years in an all boys’ school with the only female interaction coming from behind the bike sheds. “Aquinas at the time was the all boys Catholic hall and I just thought I can’t face it again. The thought of a hall with all boys again was just a step to far.”

He speaks of his time at UniCol with great enthusiasm, explaining the benefits of living on the basement floor; “I was lucky enough to have a window which opened straight out onto the car park, so I spent most of my year letting people in and out of my window with after hours alcohol or to run over to the women’s block, which was a great way to meet people.”

Luckily though, he explains, the exams where at the end of the year, as he “would have been stuffed with a semester system.” He says he never teaches a semester system as he wouldn’t impose it on anyone, finding it a cruel and unusual punishment “I do believe that students need some time to settle in and I think the system we have at the moment where you hit exams and assignments within a couple of weeks would have killed me. You’ve got to get your sealegs.”

But he explains also that he did know when to draw the line and knuckle down; “When the blossoms came out mid August, if you hadn’t started studying by then you might have a bad year.”

Critic's column offers a few discussion points for when trying to blow smoke up your lecturer’s ass.
Got a lecturer you want to know about, write us at: critic@critic.co.nz