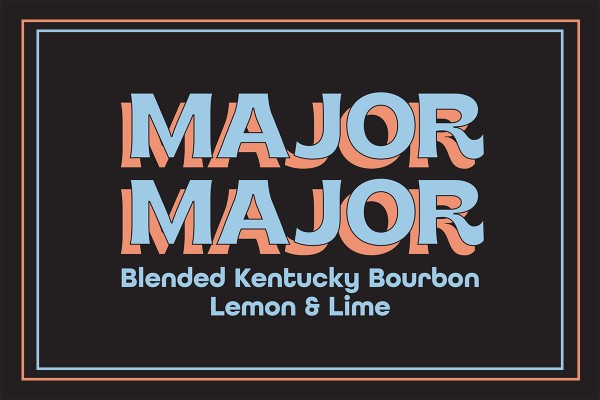 For those that have not been permanently put off the taste of bourbon by forced binge drinking rituals involving William Maverick, these are a good option. But there is an initial learning curve in the first few sips. Drinking bourbon will naturally put your bodily defences up. Your back will arch, your pupils will contract as your body instinctively prepares for a brutal session of binge drinking. But, once you take a few deep breaths and realise that your system is not about to be assaulted by a coffin of bourbon and cola, you can really start to enjoy yourself.

What Major Major has essentially done is rip off Jameson’s Whiskey and Dry Lime. A smart move, because the Jameson drinks were shockingly overpriced despite having a pretty unique combination of flavours, and tasting good. Lime and Bourbons achieve a similar flavour but at a much more realistic price-point.

The flavour is simple and refreshing. It combines the mischievous bourbon tang of a Cody’s and the thirst-quenching citrus twist of an African Elephant to beautiful effect. They are lemony, but not to the point of tasting like dishwashing detergent. Also, unlike bourbon and colas, Kentucky Bourbons do not contain sickening amounts of sugar. You can spill one without immediately getting ants.

Kentucky Bourbons have yet to go to market, but it is very likely they will be sold at the same price as all other Major Majors, at 25 dollars a box. This would put them at 1.56 dollars per standard. Par for the course for RTDs.

Major Major Blended Kentucky Bourbon is a drink that nobody asked for. Much like Major Major itself, the flavour was created as an artificial money-grab from a soulless corporation. But even a broken clock is right twice a day and, by god, these Kentucky Bourbons are a refreshing beverage.