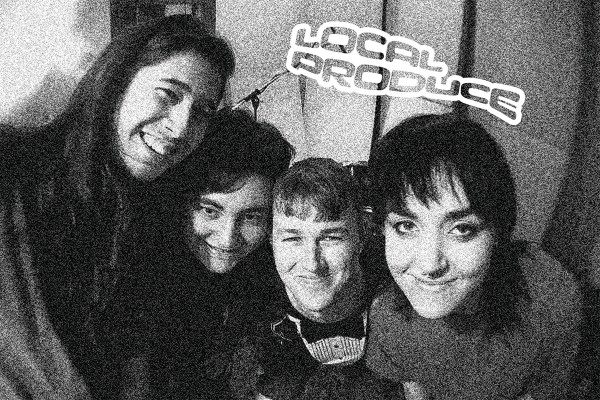 Midnight Caffeine is made up of lead lyricist and vocalist Zi, guitarist and producer Raine, drummer Hayden and bassist Ollie. The band found their name in the delirious aftermath of a late-night caffeine-fueled study grind: the true mark of a (mostly) ex-student band. Critic Te Arohi spoke with the band about their free-spirited creative process, pandemic disruptions and upcoming music.

What began as an as-needed recruitment effort by Zi for uni music assignments with pretty fluid membership, eventually cemented into a band with the adoption of their name. “It was kind of more for us than for uni after that,” said Raine. In the beginning, “it was just me at parties going, ‘I know you – you’re my friend’s boyfriend and you also do music. You should be in my band!’” said  Zi. “And you know you always have a captive audience, because their girlfriends all have to come to our shows now…and my mum, I guess. She comes to everything.”

The rest of the band credits Zi with not only being the driving force behind the formation of the band, but as the personality tying their ever-evolving music together. Zi, who started writing music in her early teens, tributes Avril Lavigne, Paramore, The White Stripes and Death Cab for Cutie as some of her biggest influences: “You weren’t a sad teenager if you didn’t listen to Death Cab for Cutie.” Zi explained that she has always been committed to music, as an Avril-Lavigne-wannabee since the ripe age of three. “I couldn’t imagine doing anything else. I would go broke to make music. I’ll live off toast and live in a cardboard box.”

Owing to the collaborative creative process that the band undertakes and with each member having very different music influences, Midnight Caffeine’s sound doesn’t exactly fit in one box. When pressed by label-loving-writers, Zi said she would normally settle for indie rock or alt rock, “Sometimes I’m like, ‘It’s noise music.’” Perhaps that’s why their first ever gig at Dog with Two Tails got a noise complaint. Ollie elaborated, “I feel like we don’t consciously pick like ‘oh, we are this type of band and this is what the song’s vibe will be.’ It just kind of happens all very organically.”

The band has been no stranger to pandemic disruptions experienced by the rest of the world. Zi joked that “I feel like we’ve been kind of cursed with recording.” Lockdowns in 2020 and 2021 coincided with plans to record their songs. They were even affected this year, with Hayden and Ollie contracting the virus the night before their tour, where they had planned to play in Dunedin, Christchurch, Nelson and the West Coast. “Oh yeah, that was great fun,” said Ollie. “We’ve managed to get plenty of gigs and stuff in the year. It’s mainly just releasing music which has been really complicated.”

‘Talk Shit’ is their newest single on streaming sites, a track inspired by Zi’s frustration with people – you guessed it – talking shit. “But also, just, you know when you go to parties and all people want to talk about is like the most menial bullshit about other people’s dating lives…and it’s so boring.” In the coming few months, the band looks forward to releasing more of their music which is pretty much all recorded, but just needs, as Raine calls it, “that fancy post-production stuff.”

You can find info about upcoming music releases and gigs on their Facebook and Instagram (@midnightcaffeineband). And to readers, Zi extends this challenge: “If someone makes a TikTok to ‘Talk Shit’ I will give them the $20 I made busking as a 15-year-old – they can have it.” Get in quick!