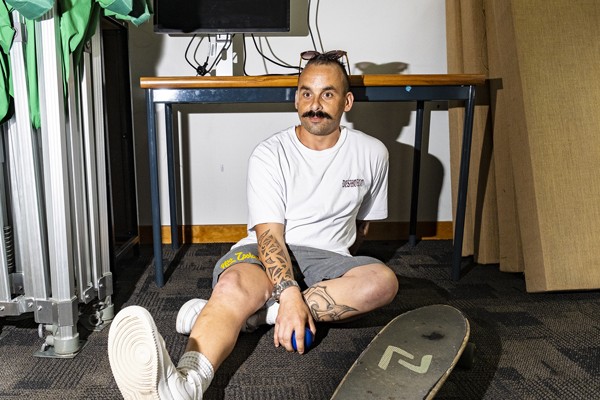 From Foundations student to OPSA President

87 Otago Polytechnic students voted for the one and only option in the recent Otago Polytechnic Students’ Association (OPSA) presidential election: Level 3 Foundations student Ezra “Ewok” Tamati. Critic caught up with him on a rainy afternoon in the Hub to get to know him, and to talk about his year to come, from making sure the student voice is heard to Taco Tuesday bribery.

Ewok ran for president as a challenge to himself. He openly talked about his struggle with anxiety, particularly around groups of people. “People scare me. Sadly, when i’m around groups due to my high level of anxiety everyone freaks me out. Hence why I'm doing this role: It freaks me out.” He listed his strengths as his gift of the gab and his empathy. He strives to understand everyone’s different stories and perspectives.

He noted that students have pulled away from OPSA over the years, which he attributes to a lack of events. In fact, prior to writing a research project on OPSA, Ewok had no idea what it was, who ran it, or what they did. “The only time I hear of [OPSA] is when I need my photo taken or I need a pen so I steal one of theirs.”

Ewok feels that increasing barbeques, Taco Tuesdays and giveaway opportunities (he mentioned the chance of swag from his clothing like Noo Zooland) will bring the OP student community closer together. He’s also keen to see a rise in the amount of te Reo used around campus and wants to help unheard voices be pushed to the forefront, with a focus on increasing support for LGBTQIA students.

He wants to hear what the people want from him by placing suggestion boxes around campus or even listing his personal number so students can contact him directly about concerns. “What we can do is while people are waiting in line, we can get the suggestion box and say ‘hey man, while you’re in line do you wanna write any suggestions you might have?’ and you get a free taco! Look at that, bribery at its finest! Don’t put that in the paper”. Sorry Ewok.

Ewok was initially tight lipped about his thoughts on rejoining NZUSA. He felt he didn’t have the necessary information to comment on the situation. However, he did mention he doesn’t see why OPSA can’t push themselves to do what NZUSA does and save $8,000 a year in the process. He’s also sceptical due to the differing styles of polytechs and universities: practical versus theory. Although Polytech and Uni students are often interconnected personally, there is very little communication during school hours. When was the last time you saw a Polytech student in Central Library?

Ewok is wrapping up his Foundation program studies and is looking forward to studying general horticulture in 2021. He spoke of his hope to help his fellow Foundations students get their voices heard and changing the perspective of Foundations students. “We don’t get looked upon, we get looked down upon, so it’ll be great for people to be able to see our class in a different view”. According to Ewok, he is the first Foundations student to successfully become president, or "El Presidente" as he calls it.

When you Google his name, a list of criminal charges is the first thing you see. Ewok admitted he has made some mistakes in the past but he is determined not to let them define who is. “I’m not trying to hide who I am, or what I've done, but here I am bettering myself and what’s a better way to show that you can change than by being OPSA president.”

Getting more personal, Ewok spoke of the most influential person in his life: his roommate and Foundations lecturer Rue-Jade Morgan. “He’s my rangatira, that’s my chief, and he’s my tuākana as well. He took me under his wing when I was going crazy and he helped me out. I’m here only because he pushes me to better myself everyday.” In his spare time, Ewok loves to be around nature, going to the gym, yoga and forest bathing. He listed his favourite film as anything with Will Ferrell, Talladega Nights being a standout. He mentioned he is single and looking for a first lady. Any interested applicants are encouraged to report to the OPSA office in the Hub.

Ewok doesn’t want OP students to focus on him, instead look at everyone else. “I just want to do the mahi and make sure it gets done. I don’t want to be that “look at me, look at me” person, that’s not who I am”. He would like to thank everyone who voted for him and his fellow Foundation students.