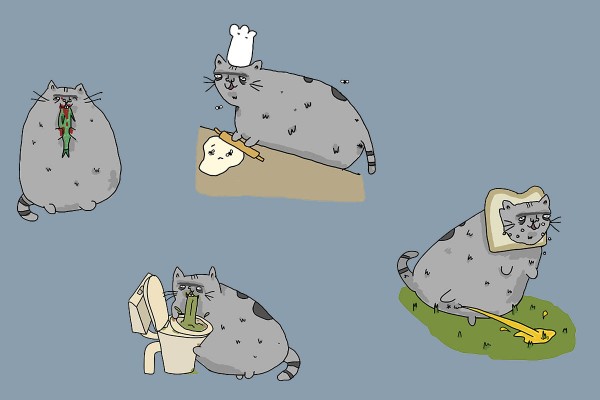 Cartoon cat may help students to print, but at what cost?

UniPrint may be using an unlicensed image of Pusheen in order to teach students how to print, which may be illegal.

Last week it came to Critic’s attention that the Central Library division of UniPrint was using the cartoon cat, Pusheen, as a mascot on posters explaining to freshers how to use a printer. Questions are now being asked as to whether this usage breaks copyright law or if it is fair use. One Critic Intern asked himself the question: “Who cares?”

Inside the UniPrint store hangs a large poster explaining how to print using PrintMe and how to use an electric stapler. The poster also specifies how to stop crying when you’ve run out of printer money, have no actual non-printer money, and you need to print an assignment due in three minutes. This explanatory poster also features a selection of Pusheen cats in various colours. One Pusheen sits on a pile of papers (making it highly relevant to printing). Sources told Critic that there are multiple A4-sized variants of the poster at printer stations around the library.

Pusheen is a cartoon cat first appearing on the blog “Every Day Cute” in 2010 and subsequently every 12-year-old girl’s Facebook page in the form of comics and gifs. The cat has no political affiliations, much like Critic, and enjoys eating ice cream and sticking out its tongue, much like Critic staff.

Critic asked students using printers what they thought about the cat and its use. “Is that the cat that slaps the ass in the gif?” asked one student as they stapled together an assignment. “Oh man, my niece has a toy of that cat. She fucking loves that thing,” said another photocopying a text book. To clarify, Pusheen is the cat slapping the ass in the gif.

A student printing out a selection of graphs said, “I think it’s nice. You know when I first used the printer I felt scared and alone, but then the cat reassured me. I mean it probably does breach copyright laws, but it also breached my heart.”

When approached, a UniPrint worker responded with laughter stating, “nah the cats are nothing new. I’ve been here two and a half years and that poster was up here before me.” Questioned on whether she thought it breached copyright law she responded saying, “the guy that made that poster could have made the cat. You never know.” Pusheen denies being created by someone from Dunedin.

Critic’s resident almost-lawyer, Erin, commented that “the Uni probably shouldn’t use Pusheen without asking the copyright holder”. She went on to qualify her statement by saying that “it seems like whoever owns Pusheen’s copyright doesn’t care too much, so the Uni is not exactly going to be forced to take the posters down”.

Despite two follow-ups and having more media and communications staff than the combined Dunedin reporting staff of the ODT, Stuff, RNZ, TV1 and Newshub, the University could not respond in time to comment on whether they thought their use of Pusheen was in breach of copyright.