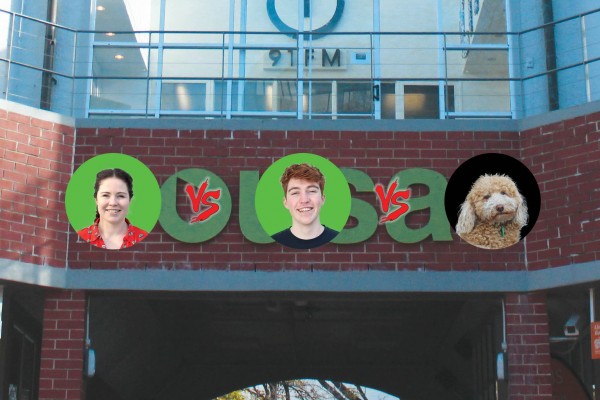 This is weird. No one saw this coming. Out of nowhere, the annual OUSA CV-padding elections have actually produced a really, really fucking good presidential race. And best of all, there’re no fucking tickets, so we can actually have a contest of ideas instead of just a bunch of cliques in matching T-Shirts running around annoying people in the library.

Laura Cairns is a co-founder of the Otago Women’s+ Club, the chairperson of Southern Young Labour, and an activist that led campaigns against sexual violence and the censorship of Critic (yeah, we had nothing to do with that protest). She also spent two years as a soldier in the NZ army.

James Heath is one of the longest-serving members of the current OUSA exec, as Education Officer this year and Colleges Officer in 2017. He’s currently at the helm of a campaign against the uni cutting the Art History department.

OUSA elections have a tendency to draw inauthentic candidates, in it for the glory of the job title. I almost wish I could be a cynical bastard about this year. It would be very on-brand. But we’ve genuinely got two excellent candidates; this is going to be a hell of a race.

Laura is more of an activist candidate – politically engaged and probably more likely to be publicly calling the uni out and pushing for both local and national political change.

James is definitely more of a behind-the-scenes guy. He’s very astute and intelligent, and he knows how to play the University’s game. Uni administration is a maze of working groups and committees and subcomittees, and James has made the connections required to make that work.

James definitely has the advantage of experience. President is tough job with a step learning curve. That being said, if you had to pick any non-exec member that was up to the task, it would be Laura. She shows up at almost every exec meeting, just to keep check of what’s going on – and unlike Critic, she’s not even getting paid for it.

This is genuinely a hard race to pick. The Presidential Debate (hosted by Critic and Radio One, Ubar, 8pm Thursday) is definitely going to be one to watch. James didn’t have the strongest debate last year, so he’ll be looking to turn that around. Laura will be looking to introduce herself and prove she’s up to the task. It might actually be fun. Plus there will be beers.