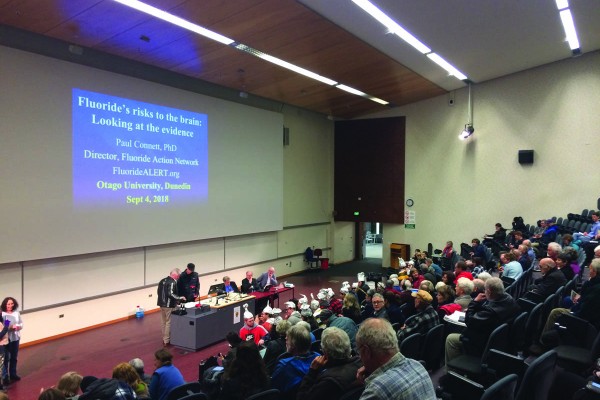 I Got Blazed and Went to the Anti-Fluoride Lecture: a Review

Last Tuesday, Saint David Lecture Theatre played host to a talk titled ‘Fluoride Is a Neurotoxin that Reduces Children’s IQ’. Personally, my IQ and dental health were both (probably) fine growing up in a fluoridated area, and I never noticed a drop in either until I started university (read: drinking and smoking). With that in mind, I let my IQ drop down even further with a pre-lecture spliff and decided to hear it out.

The audience was filled with over two hundred people – predominantly middle aged, with the stark exception of twenty students at the front in tin-foil hats.

While the lecture lacked academic rigor, it more than made up for it in terms of sheer performance art. Professor Paul Connett’s boisterous voice and erudite prose begun convincing my weed-addled mind, and I was uncontrollably giggling thirty minutes in.

Environmental scientist Declan Waugh argued fluoride has a potentiating effect on other chemicals and causes thyroid issues. He then pointed to a rise in rates of obesity and autism, deriding official evidence that “it couldn’t possibly be fluoride”.

At the end of the presentations, Connett asked if there were any professors in the audience. There were none. Any hopes of a proper debate were dashed, as Connett used the lack of challenge to his advantage.

The first question posed by an audience member was an elderly man from Mosgiel, asking about the effect of 1080 in the water.

One of the tinfoil clad members of the audience asked if the title of Connett’s book The Case Against Fluoride: How Hazardous Waste Ended Up in Our Drinking Water and the Bad Science and Powerful Politics That Keep It There was overly emotive. Connett asked if he had read the book, and told him not to judge a book by its cover.

When Connett was asked if his book was peer reviewed, he responded, “See that’s the thing, any time there’s evidence to the contrary, [the scientists] keep finding all these quibbles!”

The following day, there was a smaller talk at Union Street Lecture Theatre – fifteen audience members, and again no professors. Connett exclaimed the motto of our university “should not be dare to be wise, but chicken shit!”

Now, I’m no dentist (or professor, or environmental scientist), but some in depth Google skills were enough to defend the pro-fluoride camp.

Connett’s key evidence was a meta-analysis of studies from Iran and China which found an apparent drop in IQ of half a standard deviation, or seven IQ points. Connett then claimed flaws in two texts stemming from the University of Otago – a 2014 report co-authored by Sir David Skegg, Otago’s previous Vice Chancellor, and a 2015 journal entry by Jonathan Broadbent of Otago’s Department of Oral Sciences.

He claimed that Skegg misreported the drop of half a standard deviation as half of one IQ point, while “Broadbent’s study was flawed” as it didn’t have enough control subjects, and didn’t account for variables such as lead, mother’s IQ, or the difference between rural and urban upbringing.

But Broadbent’s peer-reviewed article effectively said the same thing about the meta-analysis, finding simple methodological design and little control for confounding factors. Particularly, the meta-analysis considered total exposure to fluoride, including areas of very high natural fluoride and exposure from coal containing fluoride. The villages studied varied in size and affluence, and in some cases could not even be identified. The ‘drop of seven IQ points’ was disputed, as nothing of the sort has been noted in countries that fluoridate their water. Broadbent’s primary research used data from the longitudinal Dunedin Study, explaining the lower number of subjects in non-fluoridated areas.