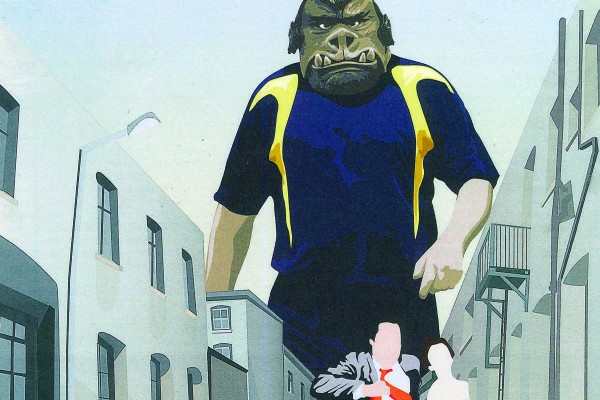 Critic perfectly happy to let them fight it out

Otago student Malcolm Moncrief-Spittle is claiming “harassment” from Campus Watch after officers removed a poster he put on a public noticeboard in the Richardson Building.

Moncrief-Spittle had put up a number of posters promoting Far-Right activist Lauren Southern’s videos. A number of other students who disagree with Southern’s racist views had written on or covered up the posters. Moncrief-Spittle recorded (and later posted on-line) a male student writing on his poster. Moncrief-Spittle followed the student, recording them on his cell phone and demanding his name.

The two students involved reported the interaction to Campus Watch as they found it “particularly uncomfortable” and were concerned “where the video would end up”.

Moncrief-Spittle put up another poster with screenshots of the video in an attempt to shame the taggers, but this was removed by Campus Watch.

After two Campus Watch officers removed the poster with the picture of the tagger, Malcolm confronted them, filming the interaction and posting it online.

In the video, he asked the two officers to “tell me why you’re taking my posters down and no one else’s”.

“So actually, it’s not really probably very um, legal to put other people’s poster up like that of them,” one officer replied.

University Proctor Dave Scott said that “The posters could potentially breach the student’s privacy and also could defame the student shown. This was the reason Campus Watch staff sought a copy of the poster, so that a determination could be made by the Proctor’s Office management”.

Critic understands that it is legal to publish images of other people taken in a public space where they would have no expectation of privacy, as is the case here.

The officers repeatedly told Moncrief-Spittle to stop filming, which he refused, and demanded that he show them his student ID.

Malcolm produced his student ID, and asked the officers three times to give him their names, which they repeatedly refused to give apart from saying that they were Campus Watch. At one point, one officer responded, “I’m campus, he’s watch”.