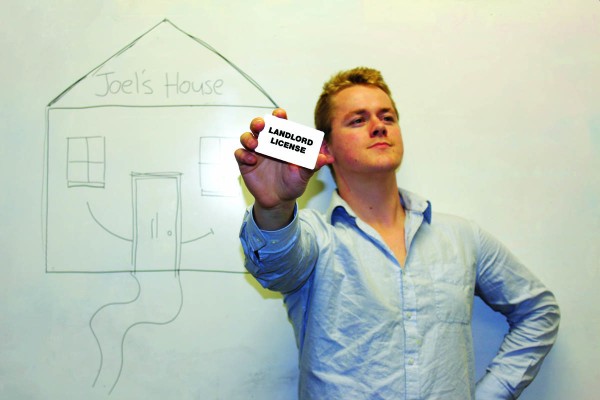 Why We Need Landlord Licensing

EDITORIAL: In issue three of Critic this year we labelled Mike Harbott as “Dunedin’s Dodgiest Landlord” after he rented unliveable flats, ignored Tenancy Tribunal orders to make repairs, and failed to pay thousands of dollars of compensation.

Adding to that, he threatened tenants with legal action if they spoke to the media, and threatened to blacklist a different group of flatties on the landlord site TINZ if they went to the Tenancy Tribunal.

In a follow-up piece five months after the original story ran, Harbott admitted he had still not paid the Tribunal-ordered compensation to the girls at 41 Gladstone Rd.

After that story, Mike asked me if he could write a public apology for Critic. I’m always open to views from all sides, so I agreed. However, you will not find that apology in this issue. Despite calling it an apology, and starting with the line “to all those who I’ve let down, I’m sorry,” he quickly turned to attacking his former tenants, calling them liars, arguing with the Tribunal decisions and making potentially defamatory statements that I felt we simply could not publish.

For someone who claimed he had “learned from the mistakes I have made,” it certainly seemed to me that he had failed to take any responsibility and was still painting himself as the victim.

It then came to light this week that for the third time this year Mike Harbott had been taken to the Tenancy Tribunal by a group of tenants, and once again he lost. He failed to register the bond, again, and failed to provide a safe, liveable house.

Look, Mike Harbott is certainly not the only dodgy landlord in Dunedin. In fact, you could argue he’s not actively malicious, more just incompetent and unwilling to take responsibility for his actions. But he has become a poster child for the problem of landlords taking advantage of student tenants who don’t know their rights.

Last election, the Green Party put forward the idea of requiring a landlord license. This is not a completely novel idea; it has been applied in certain parts of the UK for some time. It would ensure that landlords are capable and trustworthy, and penalise them with demerit points if they repeatedly show they aren’t.

Renting a house to someone is a huge responsibility; their health and livelihood are in your hands. Just having enough money or equity to buy a house doesn’t prove that you are reliable and competent. If someone like Harbott, who has repeatedly shown he’s not up to the job, wants to rent a house out, it should have to be done through a registered Property Manager who tenants can have some faith in.

You can’t drive a taxi, or even an Uber, without going through a background check and proving you have driving capabilities. Just owning a car doesn’t give you the right to go around charging strangers for rides. The same standard should be applied to our homes.