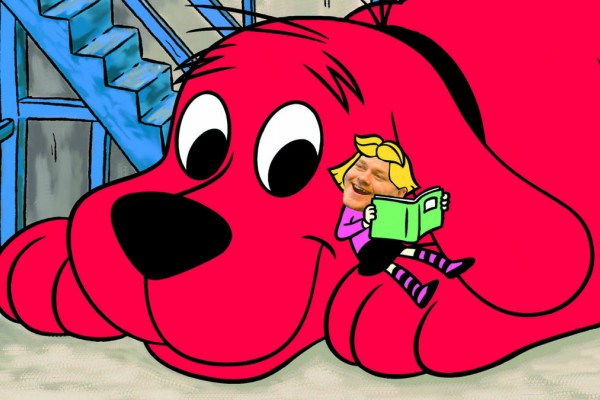 EDITORIAL: Clifford the Big Red Dog is my absolute number one favourite after-school children’s cartoon TV show of the early 2000s. I would even make the bold call of arguing that it was better than the books.

For one, Clifford could talk in the TV series, meaning he actually had a personality. In the books he was just a dog who was very difficult to look after from a logistics standpoint. In the TV series he was voiced by the dad from 8 Simple Rules and was a loyal friend who got up to unintended hijinks with his mates Cleo, Mac and T-Bone.

Then they cancelled the series/put him down, and replaced it with Clifford’s Puppy Days, arguably the worst TV executive decision since they took John Campbell away.

Not only did I lose my favourite character, T-Bone the bulldog (voiced by Kel from Kenan and Kel), and Clifford’s other puppy mates, but it also took away the ONE CHARACTERISTIC THAT MADE CLIFFORD INTERESTING – namely, his size. He’s Clifford The Big Red Dog, the only unique thing about him is that he’s fucking massive, otherwise he’s just a normal dog. There’s nothing interesting about a slightly small dog living in an apartment building. It’s actually quite depressing.

Yes, apart from being big, he is also famously red, but the real fans of Clifford lore will know that his redness is never considered that weird. No one ever makes a big deal out of his bright red fur; it’s his size that everyone tends to focus on. That’s not a surprise; if you saw a 7.6m tall dog, you wouldn’t focus on the colour of its fur. But even when he was a puppy, no other character ever comments on him being red.

No one wants to watch the prequel to Harry Potter where he’s just at a non-magical primary school. And no one wanted to watch a Clifford that wasn’t big, so it was cancelled in its second season due to low ratings. Despite this, TV2 continued to punish us with constant re-runs of Puppy Dayswell into 2007, if not later.

Why does this matter? Because Paramount Pictures are in the process of making a live-action/CG hybrid movie adaptation, directed by the guy who made Van Wilder, and I desperately want them to do it justice. Hollywood has butchered a lot of book adaptations, but Clifford deserves better. Clifford deserves to be big.