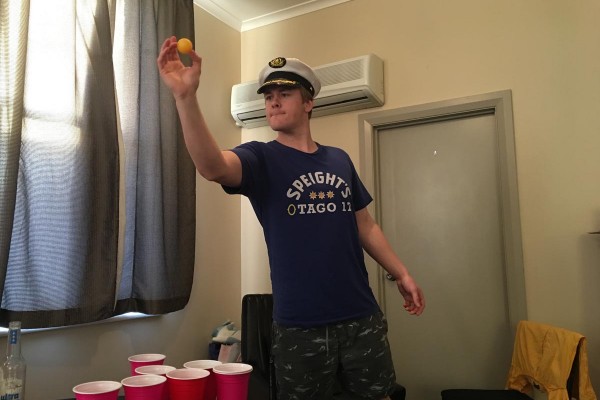 EDITORIAL: It’s a new semester in the wonderful world of North D. The clouds are out, the frost is on the ground, and the rain glitters on the footpath. All is good in our peaceful corner of the world.

The new semester also brings with it a fresh batch of exchange students to welcome into our warm embrace. I would like to take a moment to address the new kids. While all of you should listen up, this mostly applies to the Americans among you.

Water Pong isn’t just an American problem, several kiwis are guilty of it too. But international flats are by far the worst offenders.

It’s an idea that is good in theory. You fill all the cups up with water, then when a shot goes in you just move the cup out of the way and take a drink from your bottle. You don’t get dirt in your drink, and you don’t have to wash the cups as much.

But it defeats the entire point of the game. Beer Pong is a drinking game, and the drinking should take priority. If you’re not getting through a minimum of one to one and a half beers per game, you’re wasting your time. I know that’s technically possible when you’re playing Water Pong and drinking from a bottle, but let’s be honest, it barely ever happens. You sink a cup and your opponent takes a pathetic little baby sip that could barely quench a sparrow.

When you’re playing proper Beer Pong, you not only need to fill the cups a reasonable amount so that there’s enough weight to stop the cups falling over, you’re given no choice but to finish the entire cup. If your opponents sink a bunch in quick succession, it’s a genuine punishment. You’re going to get drunk.

But the greatest crime of Water Pong is that it opens the table up to people who aren’t willing to drink at all. On a lazy afternoon that’s a fine way to get some practise in, but in the middle of a party you’re wasting everyone’s time and hogging the table. Tables take up a lot of valuable party space, especially in our tiny flats. If you’re going to use it, at least make sure you’re getting fucked up.