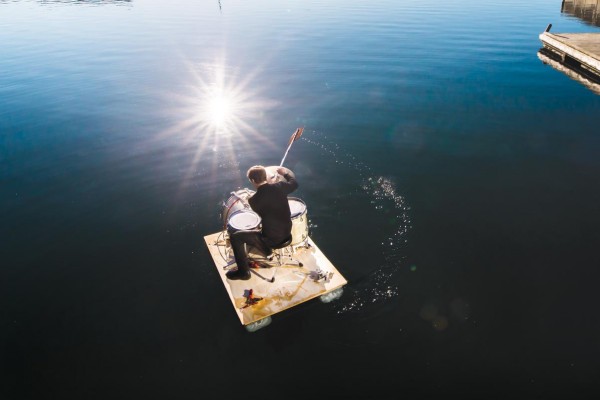 We Almost Won a Proper Award for Real Media

Fuck We Are Good

EDITORIAL: Critic made history last week by nabbing what the organisers reckoned was the first-ever nomination for a student magazine in any category at the Voyager Media Awards (formerly Canon Media Awards).

Trevor Cokley was among the top three finalists in the Best Photographer – Junior category for his photo from the article “Tim Player: The Bruised Proscenium and The Immaculate Rock Dog,” which featured as the cover and centrefold poster from issue 11, 2017. It is also the centrefold for this issue.

The image shows local artist Tim Player, who constructed a raft and floated across Dunedin Harbour playing his drums as a piece of performance art. Trevor not only had to catalogue and photograph the whole thing from several different angles, but also had to do it without anyone noticing, because Tim’s performance was based on the idea that no one would know what was going on.

Trevor described the photo as “One of those extremely rare moments where I saw a photo that made my heart race, not that anything particularly exciting was going on, just a clashing of an extreme amount of elements that made for something unmistakably rare. I found an angle above Tim on the dock as he drifted around, I immediately recognized the reflection of the sun and essential timing of his paddle movement and wanted to piece together those two elements in the photo. I need to point out that it's not a conscious realization anymore, I just get the shot when it's there and think about it later. After he drifted away from that ideal spot where the sun reflected perfectly, my heart no longer raced and the feeling was gone.”

“The award ceremony was great. Canon had a pre-event where they cozied up to all the photography finalists to convince photographers at newspapers why they should buy their gear, and I got to meet people from all over the industry. It was mostly just me being a young gun passing my contact card to everyone within ten feet of me begging for work one day. Cooler still, Jacinda Ardern was there which legitimized it a bit more, but my efforts to talk to her weren't successful. Aside from nearly choking on the fancy food and being a good sport when I didn't win the award, it was overall a successful trip. Auckland was still a hole, I got to meet lots of people, and I got to ride around in a plane.”