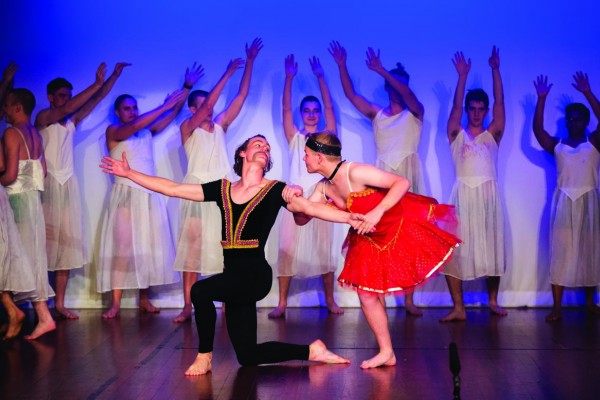 It’s Tuesday evening. Shaun Swain sits alone in the middle of the tenth row of the College Auditorium, surrounded by empty chairs. He watches an empty stage with an intense, focused stare. Nothing happens. The stage lights beat down on empty wood. Then someone rushes in from the upstairs left entrance behind him. “Stop the lecture!” they scream. Then another person sprints in from the upstairs right. “Stop the lecture!” Then more and more from the front left, front right, side entrances and onstage, spilling into the empty room, a cacophony of frantic movement and screaming voices. “STOP THE LECTURE!”

It’s one week until the opening night of Capping Show 2018, the final stretch of months of work. Auditions for actors were the week after O Week, and writers have been working since partway through 2017.

The final weekend before the show is a non-stop 9am to midnight cram session of final rehearsals, tech and lighting, and a burst of promotion around the student area.

Right now, Shaun’s focus as director is piecing everything together and making sure it doesn’t run too long. Technically the show should be no more than two and a half hours long, but in previous years it has run as high as three hours. If it’s too long they’ll have to cut sketches, which can be heartbreaking after spending so long perfecting them. “It’s a juggling act,” Shaun says. “You need to make sure there’s time for actors to change. Between the main sketch and jumping in and out for the smaller sketches it’s like two different shows at the same time.”

This year’s show, Scarfie Things, is based off the Netflix series Stranger Things, if you couldn’t tell.  “There’s kind of a nostalgia trip to 2008 instead of the 80s, it’s just faintly different enough that we don’t really give it enough credit for what it was,” Shaun says. “For example, the iPhone 1 had been released and a lot of people didn’t get it at the time. It’s hard to think of a world without smartphones, but we lived in it.”

The plot is largely aligned to the series. There’s a group of flatmates, and one of them goes missing. The rest of the crew task themselves with finding him. They’re assisted by the police chief, who in this version is a campus watch officer. Alongside the chief is the Winona Ryder character of the flatmate’s mother. Shaun says he “won’t reveal who that mother is, but it’s a pleasant surprise”.

“It’s been great playing with really tight text. Last year it was more physical and kind of a free-form romp. That was lovely too, but it’s been nice having to buckle down and figure out what makes a sketch tick and deconstructing it and making it even better.”

This year’s show will feature a Bollywood performance guest spot from the Indian Students Association, as well as the ever-popular Selwyn Ballet (hahaha it’s funny because they’re boys but they’re wearing dresses and they do ballet but everyone knows dancing is only for girls hahahahaha that’s comedy haha).

While the Capping Show has pitched itself as “open discrimination against everyone,” but Shaun says they are careful to toe the line between crude and offensive: “People like to say the Capping Show doesn’t have any boundaries, but that’s not entirely true.” At the start of the writing session they put together a “hit list” of things that are topical, relevant to uni, and would make good jokes. They also have a list of things to avoid – no references to any kind of illegal sexual activity, child abuse, or bestiality. They also specifically avoid the Christchurch earthquake.

The cast and crew are promising big things.“It’s been lots of work, lots of hard work, but it’s paid off from what I’ve seen of rehearsals so far.”