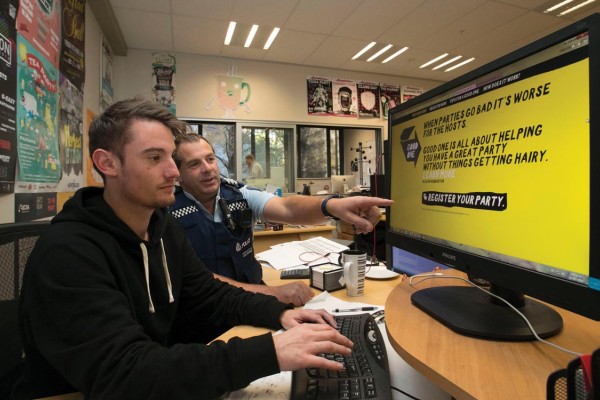 Why Isn't The Good One Party Register Working?

It's a good idea and a proven concept, but it's failing in Otago

OPINION: Dunedin recently launched the Good One Party Register to very little fanfare and minimal success. In fact, of the ten students Critic very informally surveyed, just one of them knew what it was.

Basically, Good One is a website where you fill in the address and expected size of a party you’re planning, so the police and the Proctor know about it. They’ll give you a call or stop by and have a yarn about the party and what you have planned.

Most of the students we spoke to about it were hesitant to say the least. On the face of it, it sounds like you’re basically turning yourself in to the cops and asking for your party to get shut down. But people that have used it insist that’s not the case.

Good One was started in Christchurch in 2014, and it’s really popular among students there. They’ve registered over 1000 parties, and it has led to a direct drop in police and fire callouts, noise control complaints, and rubbish. 84% of users said they would use Good One again.

A big part of the reason it did well there is that student flats in Christchurch are surrounded by houses where actual adults live. And we know adults love to complain about shit.

When you’d register your party, what would happen is the police would check up on you beforehand, so you’re already on their side. Then if they get any complaints they’re not going to come charging in, they’re going to ring and check up on you. Not only that, but if they get noise complaints they call first and let you know, so you get a pre-warning and avoid the fine. And if it gets out of control you can call the police through the register and have them shut it down without it seeming like you were the party pooper.

The police and the Proctor made a big push to expand the register to Dunners after the Six60 balcony collapse incident. After a bunch of working groups and meetings and annoying bureaucratic stuff, a pile of stakeholders, including OUSA, the Uni, the DCC and the police launched the register in time for O-Week.

Unfortunately, all that planning has pretty much been in vain, because so far basically no one has actually used it. There were four parties registered in O-Week, and not a lot more since.

It hasn’t really taken off, but on the other hand, they haven’t tried that hard to push it. There were a bunch of posters slapped up on the bollards on campus, but they crammed way too many words onto the page and didn’t actually tell you a whole lot.

OUSA President Caitlin Barlow-Groome said, “I think our biggest flaw was rushing it, we need to do more marketing because it is actually beneficial. Think about all the incidents with high schoolers showing up, imagine if you could just call up the Proctor and say ‘get rid of these guys, they’re being assholes’.”

Because Good One is run by a large group of stakeholders with no specific leader, it risks falling into irrelevance if no one steps up and actually takes charge. OUSA is meant to be in charge of marketing, but so far that has been a slow start. Hopefully they’ll turn it around soon.

It’s a genuinely good concept, which students in Canterbury have embraced, and there’s no reason we can’t do the same.