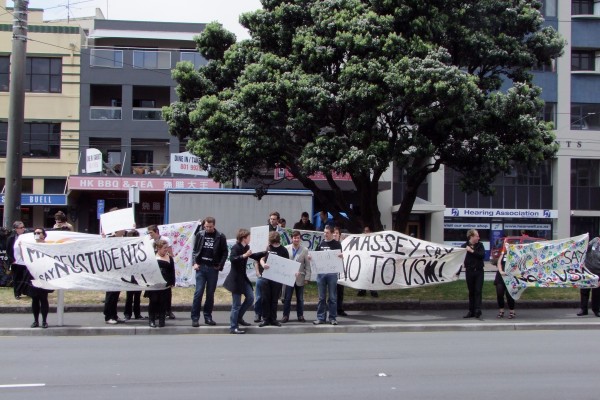 Why Haven't Our Students Associations Done Anything About V.S.M.?

EDITORIAL: VSM is the most important issue facing students right now. So why the fuck aren’t we doing anything about it?

Voluntary Student Membership, or VSM, was the worst thing to ever happen to students’ associations. When the ACT Party Bill passed in 2011, it was Public Enemy Number One for students across the country. It was heralded as the end of students’ associations as we knew them. To this day, the words ‘VSM’ are uttered in hushed tones in the halls of student unions, like Voldemort before the seventh book.

OK, quick rundown. Before VSM, we had what you call “Universal Student Membership,” which meant everyone automatically paid a membership fee to their students’ association, which allowed it to run all sorts of advocacy, counselling, events, clubs and other good things. If you were pissed off with the way the association was spending your money, you could opt out.

In theory, VSM would change that to an opt-in system. In reality, it was impossible for associations to go around asking students to cough up a couple hundreds of dollars in cash out of their pockets. So all that ended up happening was that the uni raised their student services fees, and then would dole out however much they liked to the Students’ Association. Which actually had the effect of making the whole system way less democratic. Before, students had the chance to demand lower fees if they weren’t happy with the services they were getting. Now, the uni has all the power to decide how much they charge and how much OUSA gets. Imagine if the only source of revenue for a steelworkers union was the steel company they worked for.

OUSA was basically the only association to survive VSM unscathed. We’re lucky that Otago Uni appreciates the value of OUSA’s services – things like academic advocacy, queer support, class reps, the foodbank, the hardship fund, clubs grants, R U OK, Queer Support, Te Roopū Māori, $3 lunch, recreation courses, even things like O-Week, Radio One and Critic (although we are largely funded by ads).

The ACT Party proposed VSM because of an ideological Libertarian kick against unions and probably because people used to make fun of them for being weird extremists when they were at uni. National went along with it even though they didn’t seem to care that much, seemingly because they thought that giving ACT a win on something would be enough to keep them around without life support (it didn’t work).

But National is no longer in government. Labour has been in power for over six months now. Government is full of our natural allies – in fact Grant Robertson, Minister for Finance, and Chris Hipkins, Minister for Tertiary Education, are both former student presidents.

Yet we haven’t heard a peep about repealing this dumb, ineffective law from our student leaders (i.e. the people most directly affected by it). This should have been their absolute number one priority as soon as a left wing government was formed. We finally have a government that will actually listen to students, but they’re not going to do anything unless we actually push for it demand that shit happens. Sitting back and being polite is achieving nothing.

Maybe it’s because students got a couple of wins lately, and our leaders are scared to ask for more, afraid they will push their luck.

They got a raised student allowance and one year free tuition. They’re still trying for postgrad allowance and the EFTS cap to be raised.

But here’s the thing: those other things are hard. This isn’t hard.

The other things take taxpayer money and political capital to push through. Repealing VSM doesn’t, it’s just changing the way we’re allowed to spend our own money.

Everyone in government is basically already on our side. The only people that really give a shit are ACT and that tiny one-man party is currently preoccupied with charter schools and awful dancing.

Repealing VSM would revitalise students’ associations across the country, give students more of a voice, provide way more funding for essential counselling and advocacy services, and have a marked effect on the lives of students. So why the fuck haven’t our elected student reps done anything about it?