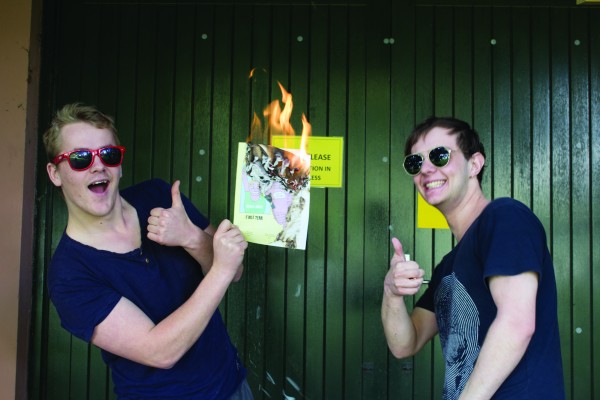 Salient Magazine is facing a funding crisis recently after receiving $10,000 less than originally anticipated from Victoria University of Wellington’s Students’ Association this year. The shortfall is forcing the 80-year-old magazine to hock off formerly prized possessions like a 2010 naan bread allegedly discarded by Brad Pitt, which, according to Lyam Buchanan (Waikato University’s Nexus) and Joel MacManus (Otago’s Critic), “Treats the symptom but not the disease”.

“We have seen Salient struggle over the last few years,” said Buchanan. “We are here to be your saviours.”

“Nexus is lodging a joint formal offer with Critic to purchase Salient outright. We will pay $750 cold, hard cash and a further 1500 Hell Pizza discount vouchers redeemable at the Hillcrest store only.”

“Critic will go in as an equal partner, contributing $750, a slightly used Fifa 06 for PlayStation 2 and a pack of breath mints,” MacManus added.

When asked what the two student magazines would do with the new property, though, they seem to have a slightly muddied vision.

“Shutting it down entirely is certainly an option. The students of Victoria University have suffered enough,” said MacManus.

“The problem is Salient may have paid up the printing contract till the end of the year so we are torn between 48 pages of visit Nexusmag.co.nz and Critic.co.nz, a new weekly magazine called Critically Nexus, or just 48 blank pages,” said Buchanan.

“I think the thing we can all agree on is that Salient must have somehow significantly imploded. Because otherwise defunding a nationally renowned cornerstone of student media that has been operating since just after World War II would be a sad and arbitrary decision,” added Buchanan.

"We thought about doing a Givealittle page, but in all honesty, we’d want to keep all the profits for ourselves. Being good at student media has extra costs."

“I mean VUWSA would literally have to be idiots with no sense of the vital role student media plays and surely they aren’t that stupid at Victoria,” said MacManus.

Neither organisation is opposed to outside investors, and both are also open to a certain amount of bribery: “Former Salient alums like (Education Minister Chris) Hipkins and (John) Campbell should get out their cheque books. If they donate enough we will give them a weekly column, provided it is up to standard.”