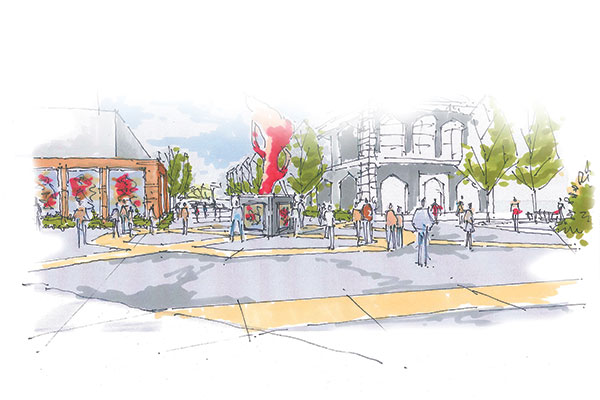 University staff and students have voiced their support for large-scale developments scheduled to begin on campus early this month, saying any disruption will be worth it in the long run.

Landscaping redevelopments from the northern end of the Richardson building to the intersection of Castle and Dundas Streets are expected to continue until January next year, while work on a new Dental School and the refurbishment of the Science 1 building is scheduled to begin late 2015 and be completed by February 2018.

The landscaping work, estimated to cost $7.8 million, is aimed at improving access to sunny, sheltered areas on campus, providing more outdoor seating and recreational areas, and making parts of the campus more visually appealing and bike-friendly.

In total, about 15,000 square metres of paving will be replaced or re-laid during the development.

University Childcare Association Director Kay Lloyd-Jones said while there is a degree of anxiousness about the disturbance that will be created, the view among staff is generally positive.

“Our experience has been very good with the Property Services when they were building our complex a year ago,” said Lloyd-Jones.

“I think the main thing it will improve is the speed of traffic in Castle Street North. At the moment, people just think of it as a street and drive too quickly down it — once the road is all one level with the footpath, people will see it as a part of the campus for pedestrians also and this will improve the safety for our parents and children.”

Mathematics student, Matt Barnes, is also in favour of the changes, saying designated seating areas will make a difference to the atmosphere of the campus. “There aren’t enough places to sit outside of libraries at the university at the moment — whether it’s inside or outside. I think it’s an awesome idea.”

Environmental management graduate and avid cyclist, Leigh McKenzie, said it’s great to see decision-makers looking out for students, and even specific groups such as cyclists. “By addressing Castle Street, the wider university area will benefit, particularly those in North East Valley and North Dunedin,” she said.

Work on the new Dental School, due to begin in November, involves removing the west wing of the existing Walsh building and the remainder of the Barmingham building behind it to make way for a new 8000-square-metre clinical building, as well as an 1800-square-metre atrium and social space.

Professor Warwick Duncan says the changes cannot come soon enough. “I’m trying to think of anything else on campus that’s more run down than the Dental School, and I can’t think of anything at the moment,” he said. “The faculty has been working toward this for a long time. We’ll put up with a fair bit of disturbance in the knowledge we’re finally going to get a new building.”

Duncan said he recently visited a museum of the company that provides the faculty’s dental chairs and was surprised to learn that chairs in the dental school were older any of the museum’s memorabilia.

The Science building refurbishment is due to begin in September and involves re-cladding, new windows, a new roof and a new exterior design intended to play down the “concrete box” appearance.

Professor Lyall Hanton, Head of Department for Chemistry, is extremely enthusiastic about the upgrade. Hanton said “it is wonderful that the university is investing in this new teaching and research space in Chemistry … This redevelopment of all our teaching lab space is even more extensive than we initially had hoped for. Originally, new first-year teaching space with a staggered renovation of senior teaching labs was what we were hoping for but now all our teaching space is to be redeveloped in one single project.”

The projects are part of a $200 million redevelopment agreed to by the University of Otago Council.
This article first appeared in Issue 7, 2015.
Posted 2:51pm Sunday 12th April 2015 by Damian George.