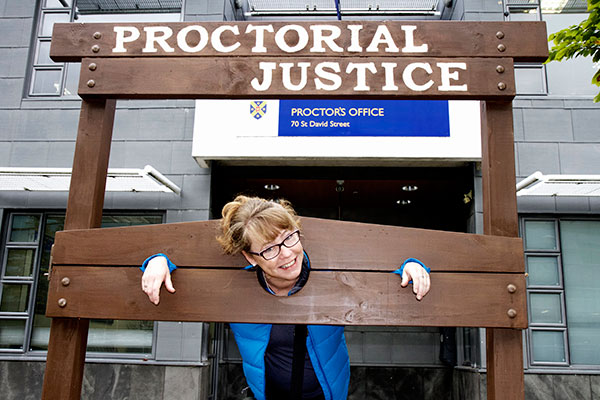 A set of stocks, emblazoned with the words “Proctorial Justice” in large gold letters, have been erected outside the proctor’s office. Unveiled at a ceremony on 25 March, the stocks were erected to commemorate the life and service of former Proctor Ron Chambers. Chambers, who served for 21 years from 1980 to 2001, passed away late last year.

In his speech at the ceremony, current Proctor Simon Thompson told the story of how the proctor’s office used to be a little red-brick house, which stood where the Centre for Innovation stands today.

One night, a set of stocks “magically” appeared in the front yard; it is believed this was due to Chambers’ tough attitude. The stocks were cemented in place, and stood as a tourist attraction for years until the house was removed to make way for the Centre of Innovation. Rumours have always circulated as to the culprits behind the stocks; Thompson said, “I prefer to believe it was fairies.”

When the old proctor’s office was demolished and Chambers relocated, the original stocks were put into storage for several years with Property Services. A lengthy search for the stocks yielded no results, and their current whereabouts remain unknown. After overhearing a passing remark from the vice-chancellor on the subject, Deputy Proctor Andrew Ferguson decided to take on the task of recreating the stocks himself. “A month later,” said Thompson, “we had a new set of stocks.”

The memorial was unveiled by two of Chambers’ children, Sharon and Iain. His daughter Sharon said that the stocks were “the best possible thing that could happen to memorialise [her father] at university.” After trying the stocks for the first time, she remarked that they are “not actually very pleasant.” A passing audience member then proceeded to ask if anybody had any rotten fruit to throw.

The Ron Chambers Memorial Stocks are fully functional, with spaces for the victim’s head and both hands, as well as a handy catch that can only be undone by a second party. They are expected to be popular with tour groups passing through wishing to take novelty photographs, as they make the proctor’s office much more interesting. To prevent students from locking their friends in them during drunken escapades, they are going to be padlocked and within view of security cameras during the night.