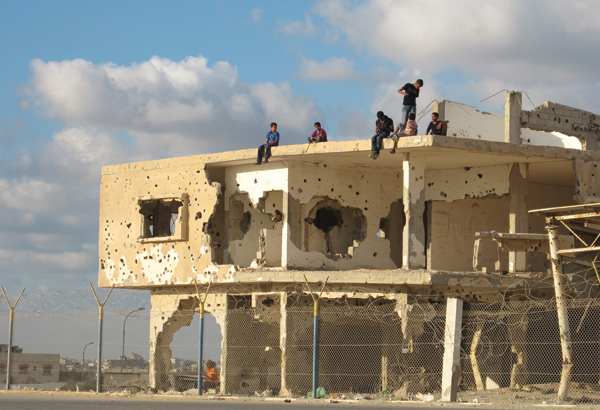 The latest assault on Palestine (a primer)

At university we are taught to be dispassionate analysts of world events, but in the face of the massacre in Gaza, academic detachment is hard to achieve. As the host of Radio One politics show The Revolution Will Not be Televised, I recently had the pleasure of interviewing Peace and Conflict Studies PhD student, Israeli peace activist Danny Fridburg. Fridburg was blunt about the vengeful public mood in Israel – a recent Tel Aviv University poll found that 95 per cent of Israeli Jews support “Operation Protective Edge.” Right-wing extremism, anti-Arab sentiment and a brutal police state has taken root in Israel. This public mood drives the belligerence of the Zionist state, which has killed over 1850 Palestinians since 7 July. After this interview my show, which is hosted by two American Jews, was attacked as anti-Semitic and we were compared to Hitler; apparently he was the ultimate self-hating Jew.

So where to begin in trying to explain the current crisis and understand how attitudes like that of our aforementioned troll find any oxygen in popular discourse?

Since 1967 the West Bank, Gaza and East Jerusalem, which are recognised by the United Nations as Palestinian territories that should be an independent state, have been occupied by Israel. Israeli settlements have sprung up on the West Bank. To protect the about 400,000 settlers, Palestinians are subjected to apartheid-like conditions with Kafkaesque regulations, roadblocks, checkpoints, separation walls, arbitrary mass arrests, daily humiliations and the expropriation of vital water resources. While Palestinians have long known occupation and dislocation (six million refugees live in the Palestinian diaspora), Israel has thrived, buoyed by a massive defence industry and around three billion dollars of American military aid per annum.

The 1990s was a time of cautious, if ill-placed, optimism where a just solution to the decades-old conflict looked possible. Palestinians rose up in the first Intifada, deploying civil disobedience, work stoppages and general strikes to force international recognition for their cause. In 1993 the Oslo Peace Accords were signed. They gave the Palestinian Authority (PA), led by Yasser Arafat (now succeeded by Mahmoud Abbas) and the Fatah party the right to collect taxes in a semi-autonomous statelet. The “doves” of the Israeli Labour Party almost managed to embrace the international consensus on a Palestinian state. However the 2,000 Israeli elections marked the end of Labour and, with it, popular support for the peace movement, as Israel entered its current hard right-wing trajectory. In the absence of a peace deal the Oslo Accords amounted to little more than deputising the PA to carry out the occupation on Israel’s behalf and an inevitable culture of corruption developed within the PA. Israel was now under the leadership of Ariel Sharon, a man found personally responsible by his own government for the massacre of Palestinian refugees during the 1982 invasion of Lebanon.

The PA emerged from this failure disgraced, in the eyes of many Palestinians, as it accommodated the occupation and became marked by a culture of graft and brutality. In recent weeks when protests against Israel broke out in the West Bank it was the PA that violently supressed them. It was from this failure that Hamas emerged, an Islamic political party comprised of both a military wing and a civilian infrastructure, providing schools and hospitals for a people in desperate need. Hamas are not every Western liberal's cup of tea, but neither are they Iranian stooges or the equivalent of ISIS, as claimed by American and Israeli apologists. It is true that Hamas attack Israeli civilians, something any decent person considers an act of terrorism. However, the real obscenity is that the same moral revulsion is not adjudged when the state of Israel kills civilians at a far greater rate. The absence of the historical context in Western media accounts, coupled with an atmosphere of latent Islamophobia, allows a simple insidious narrative to fester, i.e., Palestinians = Terrorists, Israel = Western Liberals. One need only look at historical examples of national liberation movements, even Israel’s own, to understand Hamas’ actions, even if one does not condone them. While many journalists are quick to point out that Hamas’ charter calls for the destruction of Israel, few if any will report the fact that the political leadership has repeatedly stated that Hamas would recognise Israel’s borders upon their withdrawal from Palestine.

Hamas’ centrality to Palestinian politics, and the situation in Gaza, dates to the 2006 Palestinian elections where Hamas emerged as surprise winners. Israel, backed by the US, instantly moved to freeze Palestinian tax revenue, declared Gaza an “enemy entity” and imposed the current blockade of Gaza, turning the territory into what Noam Chomsky calls the world’s largest open air prison. The blockade, also maintained by Egypt, has effectively closed the territory to the outside world. The Israeli navy ensures that no Palestinian fishing vessels can venture more than three miles offshore and, in 2010, 10 activists who were part of a peace flotilla attempting to break the naval blockade were murdered by Israel. Gazans have been denied medical supplies and building materials such as steel and concrete. The Israeli military have devised precise caloric calculations and imposed food import restrictions designed to provide a level of subsistence barely avoiding mass starvation.

In this context of widespread human degradation Palestinian militant groups like Islamic Jihad have resorted to firing crude rockets, ones that do not even have a payload, in order to pop the bubble encapsulating Israeli society. In response Israel has launched several brutal invasions and massacres. In December 2008 Israel initiated Operation Cast Lead, an offensive that lasted three weeks and killed 1,417 Palestinians and 13 Israelis (four from friendly fire). At various times throughout the blockade, the ratio of Gazan to Israeli casualties has been anywhere between 50–100 Palestinians (80 per cent or more of whom are civilians) to one Israeli. This brings us to the current offensive, Operation Protective Edge.

Israel’s latest obscenity has to be placed in the context of the June 2014 agreement between Hamas and Fatah to form a unity government seeking to achieve international recognition for Palestinian independence. Angered by the international community’s initial receptiveness to the unity deal, and determined to undermine Palestinian aspirations, the extreme right-wing Israeli government led by Benjamin Netanyahu looked for any excuse to divide Palestinians. Their cover came when three teenage Israeli settlers were murdered in an undeniably heinous act in June. The Israelis admit that Hamas was not responsible for this act; what they also knew, from an emergency call made by the victims, is that the three teenagers were murdered upon capture. Despite this, the Israeli “Defence” Forces (IDF) proceeded to rampage through the West Bank over the course of the following week, arresting over 500 Palestinians, razing houses and killing six Palestinians. Rinad Tamimi, an Otago student who is from Hebron, told me on my program on 18 July, that Israeli settlers forced her parents from their home at gunpoint at night, in search of the victims that the Israeli government knew to be dead.

As a consequence of this provocation, Hamas rockets began to rain down on Southern Israel, forcing Israelis into their bomb shelters. At a personal level I do not condone the launching of rockets on Israel, however there remains the question of “What do you expect an occupied and violently repressed people to do?” Even more pressing moral questions include: how anyone can tolerate the indiscriminate killing of Palestinians that we are now witnessing; why the wretched Israeli justifications are being parroted in our own media; and whether we have an obligation to regard Israel as the apartheid state that is?

In this operation we’ve witnessed a new blatant disregard for international humanitarian law and shocking levels of Western hypocrisy and disinterest. The “liberal” New York Times has drunk the Israeli kosher-Wine that a deep-seated anti-Semitism drives the Boycott, Sanction and Divestment movement. ABC News has displayed images of Gaza ruination and claimed that they showed an “Israeli family” trying to put their lives together. Barack Obama called the capture of an Israeli soldier inside Gaza “barbaric” and “outrageous” while having little criticism to offer of the Israelis. Israel’s repeated bombing of UN schools is disgraceful and an obscenity, however it is made even more grotesque by Israel and its allies’ attempts to blame the shelling on errant Hamas rockets. The Israeli rhetoric of Hamas holding the civil population hostage is truly revolting as it seeks to justify the IDF shooting the hostage between the eyes. Sadly this rhetoric is particularly effective amongst Islamophobes and those that have embraced a “War on Terror” view of the world (i.e. the US and many in NZ).

I could go on about the particular atrocities that have occurred but I’d like to return to my troll and explain where fanatical supporters of Israel get their chutzpah. Not every supporter of Israel is Jewish. In fact the most strident support for Israel in America is in the evangelical Christian community. We’ve seen some of these Colin Craig-types at counter protests to Palestinian solidarity actions across New Zealand in recent weeks. This community believes in Israel more than American Jews do, with a recent Pew poll finding that 82 per cent of American Christians believe that God gave Israel to the Jews, as opposed to just 40 per cent of American Jews. This is quite a conundrum. Jewish identity is not so much about religion but a particular culture and historical experience. Aside from a not insignificant orthodox community, us Jews are not very end-timey. The importance of Israel to evangel- icals, as a Jewish state occupying the entirety of Palestine, is that it fulfils a condition necessary for the rapture and the return of Jesus Christ. The problem is Jesus is getting very angry with the non-believers who are all going straight to hell if they do not accept him as lord. So basically the “friends” of Israel are driven by a religious apocalypticism that is fundamentally anti-Semitic, as Israel will be turned into a gas chamber that will be ignited by Jesus. This religious fanaticism goes a long way in buttressing America’s military interests in the region. Israel has been a key asset for American imperial ambitions having smashed Arab armies and Arab independence. While there are many secular Jewish Zionists who believe in the importance of Israel as a Jewish state, the costs of sustaining Israel as it exists is supporting apartheid and cozying up to a retrograde anti-Semitic politics.

No doubt this article has had to leave out many important events and characters by virtue of the constraints of time, space and your attention. But it is important that we find a space in campus politics to discuss one of the longest running outrages in world politics, voice our disgust at the appalling violence of Israel against Palestinians and begin the conversation about how to effectively boycott the Israeli state. If you want your social media threads to be free of horrifying images of barbequed babies, than this issue is going to require a bit more time and effort than merely crafting a clever hashtag (although I will admit to using #StopKillingChilderninGaza and #JewsforPalestine). “Dunedin for Justice in Palestine” has formed on campus and would be a good place to start. You can troll me at @OJutel.
This article first appeared in Issue 19, 2014.
Posted 9:16pm Sunday 10th August 2014 by Olivier Jutel.