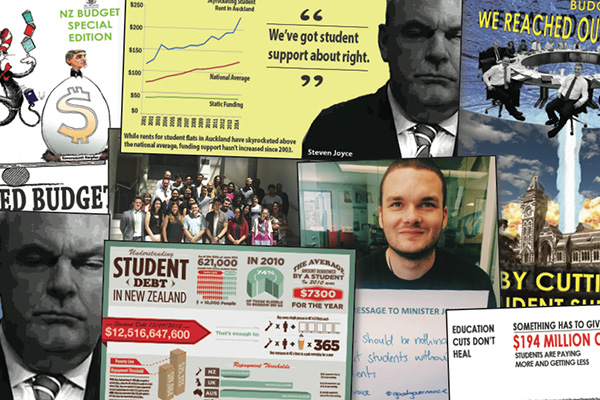 Students are once again being left in the lurch as house prices continue to rise, but financial support for student rentals continues to lag. The New Zealand Union of Students’ Associations (NZUSA) has released a report showing that as the average rent for students is increasing, the student accommodation benefit has guarded the same cap for 13 years.

The cap on the accommodation benefit means there is a maximum payment of $40 per week for students, which is “far less than what other low income New Zealanders receive” says NZUSA President Daniel Haines. This cap has been in place since 2001, and in 2012 Dunedin reached the benefit cap. Dunedin rental costs remain below the national average, but reaching the benefit cap means that as rent continues to increase, support for Dunedin students has not increased since 2012.

In Christchurch the benefit cap was reached in 2008 and rental prices have been “rocketing” since the earthquake. This has pushed rent “significantly above the national average” but no additional assistance has been offered to Christchurch students either, according to Haines.

Other low-income New Zealanders qualify for rent assistance based on the cost of their rent, while students do not. “Where’s the incentive to move from a benefit into study, or from a low-paid job into having a qualification that could potentially move someone out of poverty, if that choice is completely unaffordable?” said Haines.

The accommodation supplement, which is available through WINZ for anyone who is not a student, provides support of up to $65 per week if you live in Dunedin. Haines says, “It’s grossly unfair.” It can be upwards of $100 per week if you live in more expensive places, such as Auckland or Wellington. “Someone could drop out of their course and be eligible to receive an extra $100 a week than what they are currently receiving,” he explains.

“It’s all very well for Steven Joyce to claim, as he does, that the Student Support System in New Zealand is ‘about right,’ but this glaring failure to keep pace with rising costs means that students getting allowances, who by definition cannot get support from their parents, simply cannot afford to study,” said Haines in NZUSA’s latest press release.

According to Studylink, the accommodation benefit rates are reviewed on 1 January each year. Haines says, “at the very least, the cap on the support for rent costs needs to be adjusted upwards to reflect the reality of increasing rents.” However, he does not believe that the accommodation benefit will increase any time in the future. “This is indicative of the priorities of the Government.” He explains, “This Government has a targeted plan of cutting money from the tertiary sector.”

OUSA President Ruby Sycamore-Smith says, “It’s not good enough that students are being forced into tough situations.” Sycamore-Smith added, “it’s stupid to have to borrow money from the government in order to live.” OUSA will continue to advise students that they can save money by waiting until they are back in Dunedin in February to sign up for flats “so as not to be forced into a 12-month lease.” Sycamore-Smith says that OUSA are always looking into ways they can “educate and inform students about flatting and how they can save the few pennies they get from Mr Key.”

“If we want the graduates in our society to be reflective of the whole of society, we need to make sure that everyone has the opportunity to succeed,” says Haines. “We need to foster talent and not just for those with the deepest pockets.”