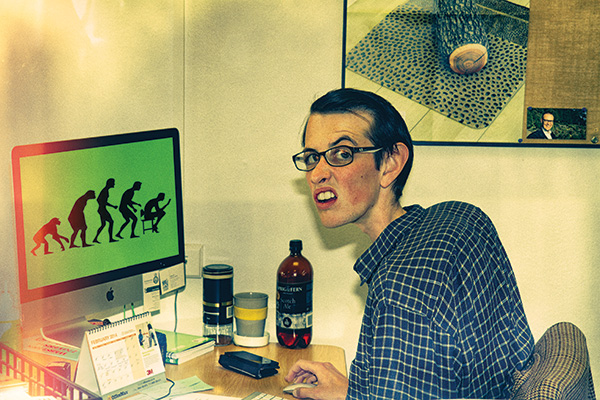 Electronic lifestyle a pain in the back

An epidemic is affecting students worldwide; the painful result of our generation being the first to grow up with an endless availability of smart phones, laptops, iPads and gaming consoles. It is the “iHunch.” The iHunch can result in permanent curvature of the spine and is the underlying problem of most neck and back issues and up to 50 per cent of headaches.

Critic spoke to Steve August, Physiotherapist and inventor of the Backpod, a tool developed in Otago to help release the frozen hinges of the spine which cause the growing hunch. “We have never had such a group of hunched young people since before people walked out of Africa 60,000 years ago. Not ever.” He explains that the screens of the electronic devices we are consistently using cannot be separated from the keyboard, so students are forced to bend over at the upper back in order to use them, unlike desktop computers which can be set up to be reasonably ergonomically safe.

August believes the University of Otago library computers are still not set up correctly for anyone above average height. “The stand-up desks can help but the library computers still aren’t up at eye level.” The screen of your computer should be in front of your eyes and the keyboard should be in front of your forearms, “but there is still going to be a problem if students then go home to play games on the laptop.”

Ideally the point of the shoulder should be vertically aligned with the earlobe, but he says students are walking around with the back of their head in front of their chest. The iHunch is known as a Dowager’s Hump in people in their seventies and eighties, but health professionals are now seeing it in students. “They physically can’t straighten themselves upright because the hinges are frozen.”

The hump is “not an aging thing” despite the fact it is common at the end of life. Instead, it is a cumulative effect of bending forward for long periods of time without any counter treatment. There are currently 600,000 people with acute pain in the upper back or neck in New Zealand “and tertiary students will be a huge proportion of these.” Although not all students will feel any pain to begin with, if they are already showing symptoms, “it’ll only get worse and it’s not something that goes away on its own.”

August explains the reason for the iHunch and how it has developed. The human body is supposed to be upright, however, from school age onwards, we start bending forward from the upper back and when it bends too often “it is strained like a tree in a high wind and will rapidly freeze like that.” The issue often begins during adolescence and has certainly developed by the early twenties. “This is when people start coming to me with problems.” As students get older, the compression will cause additional wear on the joints.

Once you have an initial hunch from leaning over too much, it becomes more of an effort to lift your head up straight; you have to overuse the muscles at the back of your head and neck about eight times more than you are supposed to. This means it is a strain against the hunch just to look straight ahead and scar tissue is formed as a result of repairing this strain. As these scarred, shortened and tight muscles get stronger, the muscles around the front of the neck (which hold your chin in) get weaker because the back muscles are now doing all the work. This causes the chin to poke out and the lower neck to be overused resulting in a “swan neck.” By this point, most of the hinges are compressed and will readily jam and freeze. “That’s when people will go to the clinic and can barely move their head along with headaches and sometimes referred pain down the arms.”

This is when the hinges have to be cracked free. “The manipulation is like hitting a rusty hinge with a hammer. The cracking breaks the rust sealant and it frees up the hinge.” This is just a temporary result because the collagen, which will still be tight, will just freeze up again and “people end up revisiting the chiropractor every other week.” He says the underlying issue must be addressed and multiple on-going treatment methods are needed, including strength exercises, posture work, massage and stretching of the spine using a form of leverage.

He believes most health professionals are so specialised that when a patient mentions the issue, they only address it with one technique, such as massage or strength training or manipulation, “all of which are correct but one method will never be enough.” He says it is essential that students start looking after themselves now rather than wait until the problem becomes irreversible. “Students go by the philosophy that nothing can hurt me until something really does.”

Dr Jenny Ogilvie, GP at Student Health, agrees that students are waiting too long to address the problem. “By the time they see us, it has become a chronic condition.” She explains that the students get into a state of constant headaches followed by a cycle of painkillers that evolves into a “snowball of stress, worry and tension and difficulty keeping up with studies.” She says that many students visit Student Health with headaches believing they have migraines, but usually it is a tension headache resulting from incorrect posture. The symptoms of tension headaches vary but are usually felt behind the eyes, feel “tight and intense” and come with a feeling of tightness around the neck.

Ogilvie says, “You can see the slouch when they walk in and sometimes the hump in their neck is already visible.” She says it develops from an initial slouch where it becomes uncomfortable to sit up straight and then it gets to the point where you physically can’t sit up straight. Student Health refers these students to the physiotherapy clinic where they are running a headache clinic.

Stuart Horton, Physiotherapist at the University of Otago’s School of Physiotherapy, sees “a lot of students a lot of the time” with the problem and believes it comes down to whether students control their posture whilst working with their various devices. Students often have the issue developing for at least a couple of years before they decide to do anything about it. The main method of prevention is that when students are using electronic devices and laptops, they should “just be really aware of your posture” and keep moving regularly.

Once the spine is tight enough, an external force has to be used on the spine to give people enough leverage to stretch the tough collagen. August describes the Backpod as a cushioned fulcrum or “high tech version of a tightly packed wheatbag,” which he encourages clients to stretch over most days a week until their spine loosens up. Users can tell how tight their spine is by lying back on the pod or something similar; “if the hinges are free, then it is actually not painful at all.”

August believes massage is excellent in loosening up the scarring, but if you have not got the support strength, or the hinges are still jammed, then the problem will not be fixed. He explains that people need enough strength between their shoulder blades so as not to collapse forward. He wants students to be giving their flatmates regular massages using the techniques he has provided on his website.

Enhancing flexibility by taking classes such as yoga, for example, is good for you as it stretches the hinges. However, while the loose hinges will move, the tight frozen ones will remain tight. A really tight spine still needs leverage to stretch over. He says the foam rollers used in yoga are the closest thing to Backpod but cannot give the same stability nor do they stretch the ribs, “which are often part of the problem.”

August notes that there is a gender difference socially on what they will do to look after themselves. “Guys will generally tend to put up with more, which I think is dumb.” Dr Ogilvie agrees that girls tend to be more proactive with addressing the problem. “I often recommend Pilates classes, but boys just can’t be bothered with it.”

Posture has psychological implications, too. “If you see somebody with perfect posture, they stand out these days,” August says. He explains that a perfect posture is attractive but impossible to achieve if you can’t move the hinges properly. A study at Northwestern University, Illinois revealed that posture may in fact have more of an effect than job title on how people perceive themselves and how others treat them. August explains that “the posture implies a psychological attitude which says I count and I am going to go and do things.” On the other hand, “the hunch makes you look smaller and then one reinforces the other.” Those who walk around with their heads held high not only seem to get the respect of others, but they also respect and look after themselves more so, too.

If you are experiencing pain from the neck, between the shoulders blades and/or pain tracking around the front of the chest, often along with headaches, then avoid the iHunch by taking action now. Multiple treatments must be used rather than any singular approach, so once you’ve put your shoulders back, check out bodystance.com. It will give you free advice on how to avoid the iHunch and tips on how to give your flatties a great massage.