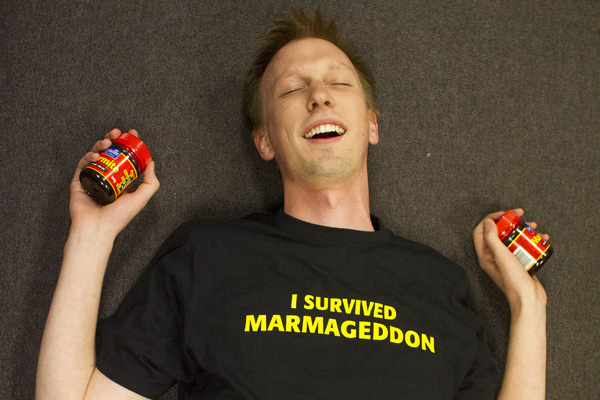 Shoppers flooded supermarket aisles on Wednesday to restock on their favourite yeasty spread.

Sanitarium, which incidentally pays no tax on its profits due to being owned by a religious organisation, called a halt to Marmite production in late 2011 after God destroyed its Christchurch factory. This became the catalyst for the mother of all first world problems, “Marmageddon,” which was basically a free advertising campaign for Marmite carried out by the New Zealand media.

The Otago Daily Times interviewed Monique Galler, who was relieved that the days of being brutally forced to eat Marmite substitutes were over. “I tried other spreads, but they’re just not the same,” she said, reading from a Sanitarium cue card. Critic spoke to another shopper, who was looking forward to eating his newly-purchased jar of Marmite. “I love lathering yeasty products onto bread and eating them,” he said. “It reminds me of my last girlfriend.”

However, Stuff.co.nz reported that several customers were unhappy with the renascent tarlike ooze, claiming that it tasted different to the pre-Marmageddon version and that, yes, they could totes tell the difference after 15 months. At least one person described themselves as “gutted,” and another posted online that “I don’t think it tastes the same. Our dogs will not eat it on toast, but they used to love it.” The dogs, who were busy dining on pâté de foie gras and broiled Kakapo eggs, were unavailable for comment.

Critic interviewed a starving Ethiopian orphan and asked if he had undergone any comparably traumatic experiences. After receiving a blank look, Critic repeated the question louder and more slowly, with exaggerated hand gestures. The dumb little shit still wasn’t getting it, so Critic gave him a jar of Marmite to try. After tentatively licking some from the edge of a spoon the orphan recoiled in horror and ran away, sprinting as fast as his spindly little legs could carry him.
This article first appeared in Issue 5, 2013.
Posted 6:30pm Sunday 24th March 2013 by Sam McChesney.