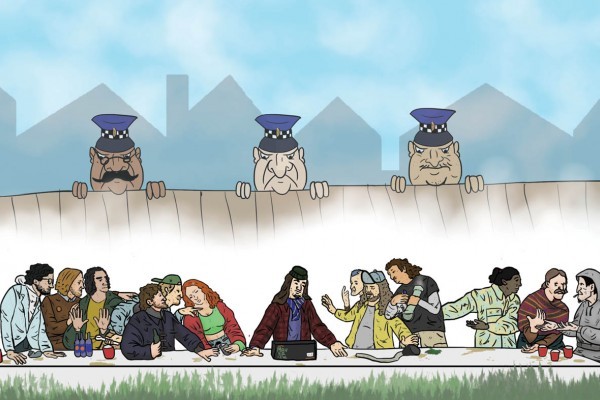 Students’ attempts to run the Agnew Street party themselves this year have been abandoned. Even though sponsors had been found, security had been considered and morale was high, security concerns raised during a meeting on 9 May resulted in the plan being cancelled.

The meeting was attended by Agnew St residents, as well as the Proctor, the Campus Constable, two cops, landlords, and representatives from Student Health, FENZ, St John and OUSA, which incidentally sounds like the worst possible group of people to smoke weed before seeing. Geography was the main culprit, according to a resident that attended the meeting. According to them: “They told us due to the geography of the street students can climb in from any side… and because there is no access out the back of the street, if something goes wrong they can’t get ambulances or police in.”

During the meeting, the resident told Critic Te Arohi that “[the Uni] made it explicitly clear that [they] were not anti-party, more that Agnew was too risky for them to support”. They “thought the Uni made pretty valid points,” saying that “the reason they don’t shut down Castle Street and they can host Hyde is because they can make it safe for students, which is not possible for Agnew.”

Residents had made an effort to make sure the event would go smoothly; Nitro had been tipped as a sponsor that could fund fences to help with crowd control. The residents had also planned to get a PA system to help further mitigate any issues that arose, even getting a formal quote from Gravity Events. The last thing standing between them and a resurrected Agnew St party was that meeting.

The atmosphere of the room became “gloomy,” according to the resident, as “they talked to us about Sophia Crestani and another student that got injured [on Agnew] in 2019, and asked how we would feel if anyone’s family had to go through that. Obviously not great.”

While steps were taken to make sure they could have fun and stay safe, residents were aware that things don’t always go to plan. Their plan to control the size of the crowd was to cap the number of partygoers through the Facebook page. The resident, though, said that: “We all know how successful that is.” While they admitted ticketing the event was the best way to manage attendance, ticketing doesn’t make sense, they said, because “we couldn’t block it off properly.”

A University spokesperson told Critic Te Arohi that: “The purpose of the meeting was for parties to meet and discuss the event, the risks associated with it and the often not considered flow-on effect that the event creates, allowing the organisers to make an informed decision on the viability of the event.” After the decision was made to cancel, the Uni said that they were “supportive of the residents’ decision and pleased the advice of stakeholders has been taken on board”. We’ll be following up on this story next week, with more comments from both Agnew and the Uni.