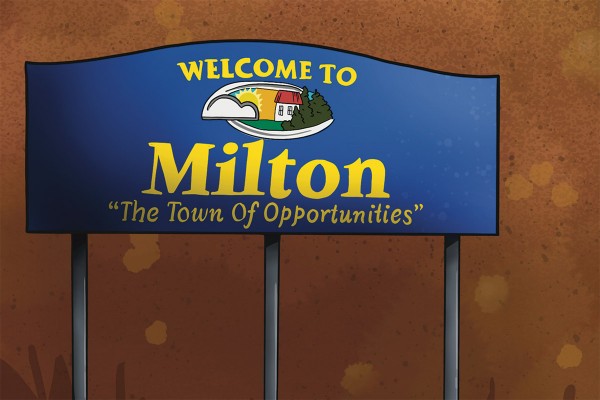 Slice of Heaven? Your summer guide to the shit towns of Otago and South Canterbury

Shit towns are the pride of our nation. For those of you who aren’t familiar with the concept of a “shit town”, it’s a town where literally everything is shit. But visiting a shit town is a cultural experience to find out how the other half live, so it’s a must do.

With summer around the corner, you and your mates are going to be taking a road trip or two. If you’re lost as to where to go, never fear. I have taken it upon myself to put together this shit town guide for you. If you feel like questioning my expertise, please be assured that I’m the daughter of a Central Otago dairy farmer and all I know about is shit towns. Sit back, buckle up, and crank the fucking tunes because you’re about to be in for one hell of a ride.

Milton is about a half hour drive from Dunedin, and you’d generally stop here if you were driving to places like Invercargill, or somewhere else in Southland. Milton dubs itself “Town of Opportunities”, which is funny because all Milton has is a prison, a dangerous but fun playground, and a Subway. The scenery is picturesque, with rolling hills of sheep farms to your right, and an algae filled, piss yellow coloured lake to your left. It’s a great first pit stop on your road trip. Just don’t swim, get a sandwich from the Subway, or end up in prison while you’re there.

Waikouaiti is about a 45-minute drive out on the northern motorway out of Dunedin. It’s a small, seaside town which has a really good bakery and fish n’ chip shop called “Fish Inn” (haha get it?) right on the main street of town. You may have also heard it been referred to as “whack-a-white”, which is what the boomers and colonisers call it, as they usually make up a majority of the population. There’s also a tavern, which is a great place to get a pint or be sexually harassed by farmers who get no pussy. Waikouiti is the shittest of seaside towns. It radiates budget Moeraki energy.

Palmerston is the southern namesake of fellow shit town Palmerston North. For those of you petrol-fiends embarking on a great, rugged road trip, Palmerston is probably your last stop within civilization for a while. Use the public bathroom and petrol station while you can, despite the fact they probably both carry a variety of diseases. Palmerston has white trash energy, as its residents usually consist of high school dropouts, old widows, and just generally questionable folks. However, it does have some redeeming qualities. There’s a cute antique and thrift store owned by a nice old lady, and the cafe there isn’t entirely atrocious.

Ah, Ranfurly. Home to Art Deco, the Rail Trail, and my childhood trauma. It’s about an hour and a half out of Dunners. Upon entry, you’ll notice a sign that says “Avoid Fatigue, stop in Ranfurly,” which is funny, because all Ranfurly makes you wanna do is go to sleep. It's nice and flat, and the entire town is about four blocks so it’s a good place to walk around and stretch your legs. It has not one, but two (!) Four Square supermarkets, so it makes for a good snack stop. A shit town truly ahead of its time. As for the demographics, you’re looking at farmers, nurses, and old people. Generally white, bitter, and right wing. As for sights to see, there’s a statue of some random old guy in the middle of town, a park, a swimming pool which hasn’t been cleaned since 1986, and a graveyard to keep things light and fun.

If you’re looking for the most empty, depressing void-like place to stop in, Oturehua is the place to be. Located in Otago’s Ida Valley, it has a population of about eight people, and I guarantee they’re all related to each other. That family tree has no branches. I’m not taking the piss when I tell you Oturehua is literally just one fucking street. There is a pub, but no supermarket, doctors office, or public bathroom, so the locals clearly have their priorities in order. There is an old Milk Bar which literally hasn’t changed since the gold rush. You can buy a bag of chips or a can of baked beans for about $13.50, and they even sell Golliwogs. Just delightful stuff, really.

Ophir is located further into Central Otago, about an hour and a bit out of Alexandra. The only thing it has going for it is this one massive fuck off bridge that is apparently meant to be very cool and historic, but is more just underwhelming and self explanatory. Ophir also has a pub called “Blacks Hotel”, which seems at least mildly politically incorrect. New Zealand’s shit towns are like going back into the 1950s. In the summertime, Ophir can reach scorching temperatures, like 35℃. Standing in the sun by the bridge and getting burnt to a crisp is the most exciting thing you can do in Ophir.

Now, chances are you’ve probably stopped through Cromwell if you’ve ever gone to Wanaka or Queenstown. Cromwell is much more developed than other shit towns. It has a population of about 5,400 people, so it’s more densely populated and not everyone has the same last name. As for things to do, Cromwell has some kind of iconic racing track if you’re into cars, mini golf, and that big fuck off fruit statue. Although slightly shitty, Cromwell does have its quirks, and, despite the skyrocketing property prices, it’s a humble, fruitful town (haha, get it?)

Heading into Canterbury, it’s compulsory to pull over and make a stop in Waitmate or else you will be pulled over by highway patrol and forced to pay a ticket. Waitmate, or Waims to the locals, has a population of about 2,000 people, who are outnumbered by the town’s population of wallabies. Yes, there are wallabies in New Zealand. Waimate definitely has a rural flair to it, but it does have a few pubs and restaurants if you find yourself needing a lunch or dinner break. Despite its boring, small town aura, Waimate has bred some of New Zealand’s finest folks, including girlboss and former Otago Uni student Margaret Cruickshank, who was the first female GP practitioner in New Zealand, and former Prime Minister and all round GC Norman Kirk (you can even visit his grave stone)!

Ahhh, Timaru, or Timaz as some of the locals call it. Located in Canterbury, Timaru is a staple shit town and is a must-visit for your road trip. It’s small, and according to one former resident, Kaitlyn, it’s best known for being the “crack capital of South Canterbury”. Despite this, it has a few redeeming features. There are lovely scenic walks around Caroline Bay, and it also has a really fucking good Thai resturant on the main street. It’s demographic consists of suburban families, retirees, and (obviously) crack heads. Timaru is a staple, and it knows exactly what it is. A shit town. It’s spectacular, it’s classic, it’s Timaz hard.

One can simply not do a shit towns of New Zealand guide without including everyone’s favourite shit town, Gore. What is there to say? Gore is home to that giant fuck off fish, and country music. As for the population, those who have been lucky enough to flee can be seen on the hit Bravo TV show Escaping Polygamy. I have never been to Gore on a nice day, it’s always cloudy and drizzly, and the public bathrooms are fucking revolting. But it’s a culturally eye-opening experience to see how the other half live, so it’s a must do on your summer roadie.

Nestled away by the Waitaki valley, Omarama is best known for its iconic Clay Cliffs, a petrol station and park with a singular swing. Omarama can be accessed via the Lindis Pass. But don’t be fooled by the majestic mountains and spectacular scenery, the Lindis Pass is single handedly the longest, most boring, excruciating road you will ever drive down. According to Google Maps, it’s a two and a half hour drive. Don’t listen to that shit, it’s a lie. It takes at least 27 hours to get to Omarama. You could probably get to space with Jeff Bezos faster. Despite the trek, Omarama does have some redeeming qualities. The clay cliffs are really cool, and make great content for the ‘gram.

If your browser’s incognito mode was a town, it would be Tarras. Tarras is such a shit town, I don’t even know if it deserves the label town. It’s more of an outhouse. According to Google Maps, Tarras is considered a “farming settlement,” which seems like a nicer way of calling it a ditch on the side of the state highway. It’s one of the driest places in Otago, both in terms of weather and things to do. The only thing Tarras really has going for itself is the fact it’s home to the giant sheep called Shrek that inexplicably became a national icon. I think that in itself explains the social phenomenon that is Tarras.

If you’re from Temuka, I’m sorry. You deserve some compensation for that. Temuka is in Canterbury, and is such a shit town, you literally have to go to the effort of getting off the highway to get to it. Even the most intrepid travellers cannot justify or face the shit town that is Temuka. As for comments, News Editor Fox Meyer only had one thing to say: “FUCK Temuka. That’s all.”