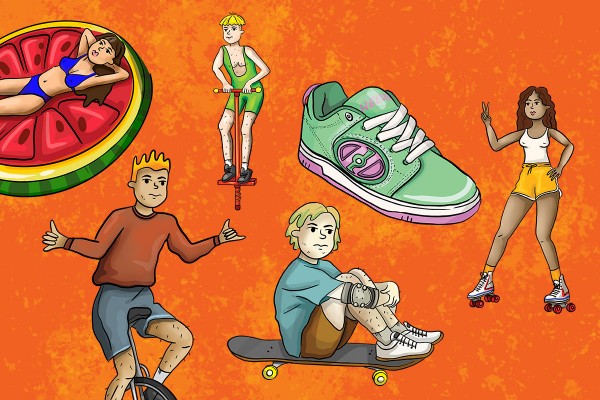 The Wheel Slim Shady: Getting Around the Walk Your Wheels Policy

The day that Otago University implemented its “Walk Your Wheels” policy was a dark time for all. I’ll never forget cycling into Uni in 2019 and being met with that hideous, mocking sign.

I’m a self-confessed pavement cyclist, the bane of Dunedin News. I like to go fast and pretend I’m a whimsical French girl heading to the market with a baguette in my basket. All of a sudden I was being forced to walk, which feels like trying to run in a glitchy video-game when you’re used to bicycle frame rates. My aesthetic and time management were in shambles, while hot girls and corduroy boys laid down their skateboards, and wept.

There aren’t any clear written consequences for just skateboarding through Uni anyways. Campus Watch wouldn’t tell me, so I can only assume you go to prison. This has led me to investigate some transportation loopholes. Make your morning commute more speedy and fun with these handy suggestions.

I popped my wheels into the shoes and immediately felt a +10 swag buff sear through my body. I swooped past pedestrians, hair streaking through the wind, a trail of flames in my wake. Nobody yelled at me for Heelying. On the contrary, I was gazed upon with awe and respect as I whizzed through campus.

I wanted to be totally sure it was okay, so I attended a University Health and Safety course and asked the OSHA officer about their stance. He said: “Heelys are encouraged.” I zoomed out of that room with a babe on each arm.

Otago University's Facebook page echoed this statement. “Heelys, while wheels, do not fall under [the other forms of mobile transport]. You do not have to take your Heelys off, however a common sense and safety-first approach is recommended.” As if any respectable Heely user doesn’t already have an IQ of ten-billion.

The only problem with Heelys is that you have to constantly propel yourself forwards, or else tip toe precariously, with the risk of arseing over. Also, rough surfaces make your brain vibrate, while gentle uphill slopes cause your butthole to clench in fear. They also hurt your toes a bit. Be wary of prolonged damage if your sole source of income relies on feet pics.

Floating Down the Leith

I had a beautiful image of floating down the Leith on a lilo, gently drifting to class amongst weeping willows and babbling ducks. My vessel was a $6.48 inflatable watermelon from the Warehouse. Minus the probable child labour used to make her, she was as eco-friendly as you can get, with no wheels or physical activity involved whatsoever.

The first two minutes were a beaut. The sun was shining as I drifted through the botans, lounging in a bikini with a bottle of rum-infused iced coffee. How good was this? I was barely wet, and sexy to boot. I soaked up the natural beauty of North D: Geese honked above, fish swum below, and a box of the rare, thought-to-be-extinct Purple Goannas grazed beside the Dundas bridge. Eat your heart out, Monarch Wildlife Tours.

The Leith is shallow at this time of the year, and I’d set a straight course towards some scary rapids. At this point I Ever Given’d between two rocks. I was stuck in the Leith, blocking many important ships from their safe passage out of Ross Creek.

I kicked my legs and tried to reposition, but the HMS Watermelon had breached and was swiftly deflating. I prised myself free and swept down the river, sinking deeper and deeper into the cold water, desperately avoiding mazes of shattered Speights bottles. The HMS Watermelon groaned and farted out a jet of water. A group of breathers stopped to laugh and jeer.

It became rockier the closer I got to campus. But I’m no coward. A captain always goes down with his ship. I hauled myself over the broken glass and slimy boulders, scraping my hands and ribs to bloody shreds, forgetting that the Leith is fucking gross and full of tuberculosis and possibly even human skeletons. By the end of it I was literally crawling through duck shit. I emerged as a drowned bog witch. When I got home, the shower water ran off chunky and brown, like day four of your period.

What would have been a two-minute walk ended up taking half an hour, and being far more traumatic. Floating down the Leith has potential, but I’d recommend bringing a sturdier vessel, and an emergency hypothermia blanket.

Nobody in 2021 owns a pogo stick, but this would definitely be an acceptable form of campus transport. No wheels, only joy. You can buy a child’s one from Kmart if you’re a short king and weigh 40kg or under.

I tried to ask Campus Watch their stance on pogo sticks. They refused to see me, because they were all having too much fun on the pogo sticks that they whip out when no one is looking.

Otago University claims that rollerblades fall within the same taxonomy of “personal transport devices” as bicycles and scooters, but no student has yet been sent to transport jail for rollerblading on campus.

Back in the day, when Fox was much cooler, he used to rollerblade around Uni at least once a week. He is the modern man.

“I never faced any consequences for it except for two students that called me a homo, which is fine,” he said, homosexually. “You get a lot of love for it. Cops love rollerblades. I never had a problem with cops or Campus Watch because technically I am walking my wheels. Cops also know that they should be afraid of you because they can’t catch you — because you move too fast. And women throw themselves at you.”

Loophole: Unicycles have a wheel, not wheels. I knew I was onto something big but I had no way to prove it.

Clubs and Socs didn’t let me borrow any of their rotting hippy equipment, and nobody I knew owned a unicycle, even though my friends are a bunch of fucking clowns. I was about to give up when a serendipitous miracle occurred. While walking dejectedly through campus, the setting sun illuminated the silhouette of a 70 year old man unicycling his way towards me.

His name was Lee and his calves were as thicc as his unicycle was tall. He had never faced any consequences for unicycling around campus, because you don’t fuck with a 70 year old man on a unicycle. His daughter had warned him about the rule. Lee didn’t listen.

“It’s pretty unlikely that I can gain a high enough velocity to injure someone,” Lee explained, seemingly unaware how funny a unicycle-induced death would be. “This is the place I like to work out. I’m 70 years old. It’s a way for me to keep my legs and physique conditioned. It’s a very cheap hobby.” He hopped back on his unicycle, did a spin around a lamp post, whipped on a pair of pink fluorescent visor shades, and disappeared into the sunset.

I saluted. I knew deep down in my heart that, when I needed him most, Lee would return.

A Skateboard, But With Someone Dragging You Along

Like a Victorian boy in a sailor costume dragging along three wooden ducks on a string, you can recruit a friend to tug you about while you do sick ollies on your skateboard. Somebody else is walking your wheels. If you crash, it’s their fault. If campus watch shows up, its them going to campus transport jail.

In this same vein, if you are very small, you can hide inside a baby pram while someone pushes you about. Why the hell do babies get wheels?

How come toddlers and monster-drinking 14 year olds are allowed to hit me in the ankles with razor scooters on George Street but I get yelled at by boomers when I do the same thing? Pisses me off big time.