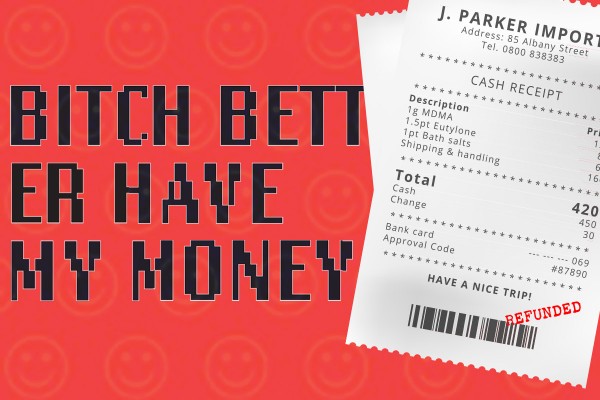 How to Get a Refund From Your Drug Dealer

A surprising number of students have been able to get refunds from their drug dealers, after buying what they thought was MDMA.

Sales of ‘MDMA’ are still common in New Zealand despite the fact that there’s very little pure MDMA in the country. It’s all getting stuck at the border, probably unable to afford the high MIQ costs. What people are selling in place of MD is usually eutylone or another synthetic cathinone (commonly known as bath salts).

Not everybody that takes bath salts ends up eating a man’s face off under an underpass (I’m looking at you, 2012), but almost everyone reports a nasty comedown. The drugs are generally regarded as a ‘shit time’. If you score a gram of what you think is MD that turns out to be something else, as one student put it, “the product received was not the product advertised.”

But you can’t exactly take your dealer to the Commerce Commission, and Fair Go won’t answer your calls. So, if you feel the need for justice, you’ve gotta do it the old fashioned way. One student, who asked to be identified as Stabby Annie, told Critic about her experience trying to right this wrong.

Annie bought a half gram off of her flatmates’ ex-boyfriend at the beginning of the year. She had expected to spend a couple hundred dollars on the half, and thought it was a bit suss when she was only charged $120.

It was also a bit suss that the dealer was wearing an ankle bracelet from a prior conviction. When he was arrested for dealing MDMA previously, the drugs he had been charged with distributing were actually so low in purity that he was given a reduced sentence – because dealing eutylone carries less severe consequences than dealing MDMA.

So, feeling suspicious, Annie did what any responsible skeptic would do and let her flatmate try it first. Kind of like when you know something is going to be spicy but you don’t know how spicy so you give some to a mate to see if they break a sweat.

“She had like a three-day comedown,” Annie told Critic, “she was crying every single day. A total menace. I was really worried about her.” So Annie bought some tests from Cosmic. The test for MDMA purity came back at 0%, and the other test identified mephedrone.

“So I’m like alright, I’m not taking this,” decided Annie. She asked her flatmate if her ex-boyfriend would do a trade back. “And to my surprise, he said yes.” Annie is now receiving her refund in weekly instalments of $40.

Annie told Critic that if he had refused, she was prepared to cite the Consumer Guarantees Act of 1993, even though drugs are (probably) not covered under the Act. She hoped that her dealer did not know that.

Jack* had a more straightforward approach, and didn’t have to talk to any real people, which is just how he likes it. He bought some drugs online using Tor, and paid about $80 in Bitcoin. Jack never got his drugs.

“I figured it was a scam and I had lost the money,” said Jack. He left a bad review on the website, and followed the guy’s Bitcoin wallet address (Critic has no idea what this means) to leave him a message. “I didn’t have much hope, but yeah, it worked,” said Jack.

When asked how someone smart enough to use the dark web could be dumb enough to get scammed, Jack said he probably should’ve checked the seller’s reviews before buying. Apparently the dark web functions a lot like Trademe, with some more-established sellers boasting hundreds of positive reviews. And just like everywhere else, it is populated with its own clandestine Karens, like Jack.

Kirsten* said that she had bought some “MDMA” from a friend who got it off another friend, who got it from God-knows-where. She got it tested at KnowYourStuff, and was told it was mostly “filler” and eutylone. No MDMA.

“Obviously I wasn’t gonna take it because I like my eyeballs in my head,” she said, so she gave it back to her mate. Her mate then gave it back to the dealer, who has a questionable relationship with eyeballs. He insisted it was pure despite the obvious proof that it wasn’t. After pestering, he caved and reversed the deal. “Go get your drugs checked,” said Kirsten, “it’s not worth taking shit stuff.”

Billy* wanted to buy some MD over the summer, and met “some guy in a park” at night to pick it up while playing a fun game of “am I going to get stabbed tonight”. He got it tested the next day, because he thankfully did not get stabbed, and found the drugs to be cathinones. “I was pretty pissed, but what can you do,” mused Billy. Just a few days later, Billy noticed a familiar car. It was his dealer’s. So he did what any sensible human would do.

“Me and a few mates just followed him home.” And on that glorious afternoon, after following a drug-dealer to his house, the boys got their refund. “He gave us our money back and apologised,” said Billy, peacefully wrapping up a story that included two solid opportunities to get stabbed.

The lesson Critic learned was that drug dealers, just like everyone else, will cave to social pressure. So put some heat on them to make sure they’re providing you with what they’re advertising.

“And don’t buy too far down the chain,” said Stabby Annie, “it’s hard to get a fourth-hand refund. You’ll have much better luck if you actually know the guy.”