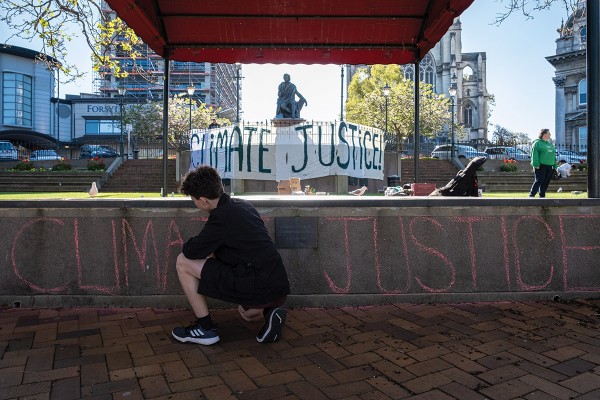 It’s easy to think that the future is already fucked. Activists of New Zealand past have lived and died fighting for nuclear disarmament, environmental protections, and the return of stolen land to tangata whenua, fed up by the unjust world they saw around them. But we still face apocalyptic scenes of an uncertain future today. Young activists today are just as fed up but are keen to make a real difference.

Local groups including Extinction Rebellion, Environmental Justice Ōtepoti, Students for Environmental Action, Generation Zero, and School Strike 4 Climate are organised, focused, and passionate about climate justice. Critic talked to some of those involved over the past year to hear about how they shut down a coal mine in Canterbury, and took on a local fertiliser company linked to armed conflict in the Western Sahara.

Otago student and climate justice activist Adam Currie said that youth activism today, is “personal”. Young people are going to be far more affected by the actions that we take now. “It’s our houses that are going to be underwater” he said — and that’s if we can afford any before they’re all submerged. These effects are going to be felt even more acutely by marginalised communities in our society.

Despite that urgency, “climate action at all costs has left others behind,” Adam said. If it were a more cohesive movement in the past, he reckoned that we would have got to the point we are at today a lot faster. Adam pointed to cases of climate activists in the past fighting with coal worker unions, and ignoring the indigenous communities that have knowledge of the whenua. He said that “if you’re not fighting for marginalised communities alongside climate justice, if you’re not fighting for disability rights alongside climate justice, you’re not fighting the whole fight together.”

There are, however, “enemies in this fight”, said Adam. Climate change is not the fault of students or the general public. Rather it is the fault of fossil fuel companies, wealthy individuals, and any other entity actively pushing back against movements for climate justice.

In September 2020, over 30 activists travelled to Darfield to occupy and blockade the Canterbury Coal Mine belonging to Bathurst Resources. The activists travelled to the mine with a pipe-dream goal of shutting it down for good, and a more immediate goal of bringing attention to its purported illegal mining activity. Jett Gannaway, a member of XR, and an Otago student, who was one of the activists involved, described the experience as “fucking cold”.

Jett said that the protestors blockaded the mine because Bathurst were not only extracting a shit-tonne of coal, but they were extracting five times more coal than their resource consents legally allowed them to. In response to Critic, Bathurst Resources said that “the situation at Canterbury Coal is more complicated than the claim made,” and that there was a “lack of clarity over the resource consents Bathurst Resources has for the site.”

Eventually the activists were removed by police. Adam, who was also at the protest, told Critic that the people trying to stop you, “always make you feel like you are ants” but that ultimately, “people power does work”. The mine, which has been operational since 1872, is set to close for good in June this year. Jett described that as a “win”. Bathurst denied a link between the protest action and the mine closing.

Bathurst still has other mines, so activists don’t see their work as done. In December last year, they locked themselves to tracks at the Dunedin Railway Station to stop a coal train traveling to a Fonterra milk drying factory from Bathurst Resources’ mine in Southland. Jett said this led to positive conversations with KiwiRail and the police, and brought attention to the fact that Fonterra is still using coal to produce powdered milk to send to China. Adam stressed that the fight against coal was not a fight against coal workers, and that movements like Coal Action Network and Extinction Rebellion are pushing for clean, secure, well-paying jobs for coal workers and a just transition for everyone working in the fossil fuel industry.

Coal and climate change are not the only causes student activists have fought-for over the past year. The trade of blood phosphate, which is responsible for the illegal occupation of indigenous land by the Kingdom of Morocco, is linked to two New Zealand companies, Ravensdown and Ballance Agri-Nutrients. One of them, Ravensdown, has a factory in Dunedin. Aside from state-owned entities in India and China, Ravensdown and Ballance Agri-Nutrients are the last two companies in the world to be doing this.

The Ravensdown factory that processes this phosphate is roughly a kilometer away from the Uni, so when local activists found out a shipment of blood phosphate was arriving at Ravensbourne in June last year, they blockaded the entrance to the factory for the day. Jack Brazil, an activist from Environmental Justice Ōtepoti discussed how, on that frosty June morning, people brought them kai and hot drinks to keep them going, and the response from the public was “for the most part, really positive”.

Kamal Fadal is the Polisario Representative to Australia and New Zealand, representing the indigenous Sahrawi people of the Western Sahara. He said that by paying OCP (the Moroccan state-owned company that runs the mine) for this phosphate, Ravensdown and Ballance Agri-Nutrients provided an incentive for the continued Moroccan occupation of the Western Sahara. Jack Brazil and Bruce Mahalski (an activist from Extinction Rebellion), both said that not only do Ravensdown and Ballance Agri-Nutrients have “blood on their hands”, but so does New Zealand by association.

Ravensdown denied that the Western Sahara is “occupied” territory, and preferred that Critic use the term “non-self-governing”. They said that they consulted with OCP regularly about the benefits of the mine to the region, and that the Bou Craa mine employed over 2000 people in the region “many of [whom] are Saharawi”. The money, however, is still going to the OCP and Kamal claims this money is used “to buy weapons that oppress and kill our people.”

All the activists emphasised the importance of building community to make change. Big corporations, like Ravensdown, Bathurst, OMV, and Fonterra spent a shit-tonne of money shifting the onus of what they are doing onto the consumer, Jett told Critic. Adam said that change is created through organising protests, but most importantly building a collective community that can stand up to the powers that be. “Collectively we can regulate emissions, we can tax these giant corporations. We can’t do this through every student stressing about their showers” he said. So how can one student do anything significant? “Join a group, start talking to people, find something you are passionate about” was the answer echoed by everyone Critic talked to.

University and high school don’t teach you how to shut down a coal mine, but Jett said that he felt incredibly supported in environmental groups from the get go. Adam reckoned that “the system is set up to make us feel small.” He told Critic that when activists get burnt out and feel too stressed, or even just “pretty shit”, local activists turn to the collective communities that they have built to share kai, hang out together, and support each other.

It’s easy to think that the future is already fucked. Bruce told Critic that he’s no longer optimistic about our chances of solving climate change and the myriad other problems facing the world today, but he continues to fight because otherwise he “wouldn’t be able to look [his] family in the eyes” otherwise. Jack is more optimistic and believes the systems in place aren’t timeless and that “big radical changes that have big radical impacts” against climate change are possible. Adam believes that “winning slowly is losing” and currently we are winning slowly (i.e. losing). But he reckons pressure is building, and that with more, we can start actually winning.

Despite it sounding cliché, every little bit does matter. We are never going to ‘solve’ climate change but we are also never going to reach a point where we can’t do anything. Every meaningful action taken today is one less hectare of forest burnt down, one less cyclone created, and one less armed clash over scarce resources. If you are a student and you have something that you care about, the advice from these young local activists is to talk to others about it, build a collective community who cares or join a group, and, ultimately, do something about it.