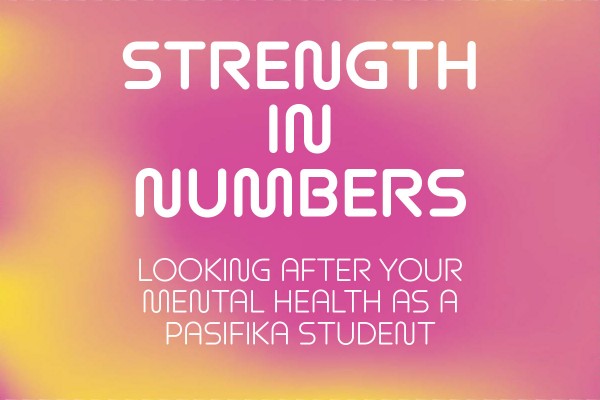 Strength in Numbers: Looking After Your Mental Health as a Pasifika Student

I remember walking in to Student Health as a fresher many moons ago, feeling crook as fuck in all ways possible, just needing some help. I looked around for a brown face or name. There were none in sight. My name, pronounced incorrectly, was called out by the Caucasian doctor, summoning me to their office. I took a seat, and the first thing that came out of the doctor’s mouth was “bula vinaka!” Because that ticks the cultural competency box, right? I talked about my stuffy nose and my stupid asthma lungs, and left out all the hard brain tings I was going through. In exchange, the doctor gave me a prescription for antibiotics and sent me on my way.

“Damn, this place is really built for and by white people, huh,” I remember thinking to myself. This experience meant that I didn’t step foot into student health again for the rest of the year (hehe x). I found myself completely ignoring my mental health.

Mental health is an already-sensitive subject. Being a Pasifika student at University, it can be even harder to talk about our mental health and begin to care for it for a multitude of reasons.

“We’re in the South Island, which is predominantly European, and there are not many Pacific Islanders at Otago, so we tend to stick to our own groups. Sometimes you wake up and you’re like, am I even supposed to be here?” said Moala. Universities are not places that have been designed for us.

Styles of teaching and the types of information that are valued in University spaces are different from what is valued in indigenous contexts. This makes it hard for us to identify ourselves as students and to feel a sense of belonging to Universities in some cases. A lot of Pasifika at the University also live away from home, physically separated from our families and communities.

“With PIs [Pacific Islanders], it’s not as easy for us to talk about stuff that’s real personal. It probably comes back to the image of trying not to seem too soft,” said Lorenzo. There are unspoken cultural rules that prevent us from speaking about things that are bothering us, such as mental health issues.

There are also differences across generations in terms of these cultural rules, which may add to the stickiness of discussing mental health. “I feel like it’s kind of generational. Like, we’re having the conversation now, but my dad probably wouldn’t have these conversations,” said Afa.

Lorenzo hasn’t struggled with severe mental health issues himself, “or maybe I haven’t noticed it,” he said, reflecting how sometimes we focus on our communities more than how we are functioning as individuals. Moala said he’s had “times where I’ve just sat in my bed and had some bad thoughts.” Afa has gone through “mostly anxiety” where he “found it hard to make friends.”

Ray said he’s “definitely struggled with mental health stuff,” especially at “crunch time” with exams. “First year was probably the toughest year for me. I was at my lowest, but I’m grateful that I went through it because of the growth that comes out of it. I’m a stronger person.”

Faumuina Professor Fa’afetai Sopoaga, better known as Faumuina or Dr Tai among Pasifika, is an expert on the mental health of Pasifika students at the University. She and her colleagues set up a study called Ola Malohi, looking into Pacific students’ mental health and well-being at Otago University. “The challenges for Pacific students are similar to those for all students starting or transitioning to higher education: homesickness, cultural adjustment, adjusting to a new learning environment, concerns about whether they could make new friends, difference in food availability, finances etc.”

“To be honest, for guys, it’s not really talked about. It’s pretty sad,” said Lorenzo. Many Pasifika may not be taught about what mental health is or what it means to take care of it until they face struggles themselves. “I didn’t really hear about mental health until I was in early college (high school). I didn’t know what mental health was until life got tough,” said Ray. Moala thinks that “education plays a part in it as well, sometimes we don’t fully understand what mental health is.”

“It’s taboo eh, especially for men. There’s that stigma where it’s weak to speak out and show signs of struggle, especially when it comes to mental health,” said Moala. “As a man in the Pacific community, you’re not really supposed to talk about your own mental health. I’m not sure if it’s a cultural thing or if it’s just a real taboo to talk about stuff.”

“There is stigma around “mental health” in general,” said Dr Tai. “So far in our research we have not observed any significant gender differences on mental health and well-being.”

“As much as I joke around about talking about our feelings, for me and my group of boys, it’s good. We’re able to talk about stuff and feel comfortable in that joking space,” said Lorenzo. The humour of Pasifika people is unmatched — being surrounded by your people, cracking up at literally anything, sharing jaw-on-the-floor, tear-jerking laughter, produces an indescribable feeling. This humour can be used as a way to facilitate conversations about mental health. Our humour is used as a way to build connections with each other across the va (relational space), and to ease into conversations that feel uncomfortable.

“For a lot of us, it’s just family that helps us feel grounded, helps us feel better,” said Lorenzo. Family is an integral part of being Pasifika, and even though our families can often be some of our harshest critics, staying connected to them is central to caring for our mental health. When asked about what might help Pasifika students look after their mental health, Lorenzo said “for most of us, it’s family. Maybe one reason why I haven’t encountered anything is because I always try to keep a link with my family when I’m down here, at least once a week I’ll call, to make sure I’m good.”

A few people I interviewed said that they turned to self-reflection as a way to look after their mental health. “When you have a bad day, try and reflect on it and see what could’ve gone right and what you got out of it,” said Moala. Reflecting on personal growth and being grateful for the tough times he’s faced in the past helps Ray look after his mental health. “For me, I’ve been through the lowest of my life so I try my best not to get to that point again. Now, life is better and I’m grateful for that struggle.”

It’s not surprising, then, that faith may play a role in looking after mental health for some Pasifika. “When I do have bad days, I resort back to my faith. That’s a big foundation for me, my faith has always been a strong hold in my life,” said Moala. “Rather than seeking people first, I always go back to my faith.”

Having talanoa (conversations) with others who we relate to, who we have built and nurtured the va with, also came up as being essential in looking after mental health. Sometimes all we need is to feel heard, held and supported. “It’s good to know that someone’s actually listening and appreciates what you’re actually saying. If I say something and the fact that they actually listen, it makes me feel good and it’s off my chest. You just feel appreciated,” said Lorenzo.

Building strong connections with others and making your own, chosen kāinga/aiga/vuvale (family) also promotes good mental health for Pasifika students. Pasifika cultures are overwhelmingly collective — we function in groups and communities rather than as individuals with self-serving goals and behaviours. “Pacific, we’re very strong as a community. We feed off each other. When Pacific people are alone, it’s not really good,” said Ray. Being together, being meaningfully connected by our mutual understanding of the complex realities we face daily, benefits our mental health. “When you’re alone it can be very tough, but together we’re strong, we can deal with anything,” said Ray.

The research of Dr Tai and her colleagues revealed ways that Pasifika students look after their mental health. “Our research found that feeling connected to the University and the local community was very important,” she said. “This gave many a sense of belonging and was linked to their well-being. Feeling that the University “cared about them” and knowing where to access help were also important.”

Specific forms of support for Pasifika students were important too. “The Pacific Islands Centre was one of the most common sources of support the students had accessed,” said Dr Tai. “There is now a Pacific counsellor and well-being staff in the Student Health services.”

One theme stuck out in every talanoa I had with Pasifika students about caring for our mental health: we function as essential parts of larger collectives, not as singular, independent, or separated beings. We are each single fibrous strands woven together to form mats, representing our kāingas, aigas, vuvales, communities, if you will. Missing strands make for holey mats, and nobody wants that. Just as individuals cannot exist well without the collective, the collective cannot exist well without individuals.

“Our work with Pacific students indicates that health is viewed in a holistic way. Mental well-being is just as important as physical well-being, as well as spiritual well-being, well-being of whānau and the wider community. There is interconnectedness between these areas,” said Dr Tai.

At the end of the day, all we want is to see each other happy and healthy, and taking care of our mental health is part of that. “We’ve just gotta break the chain. As much as we joke around, like it’s weak to speak out coming from a Pacific background, and being male especially, I think it’s good for our generation to speak out,” said Moala. “Our generation is starting to get into breaking that chain, so it’s not taboo anymore.”

We need to start having those uncomfortable conversations and speaking up when we feel shit. Our kāingas, aigas, and vuvales have held us through plenty of shit times over the generations, and they will continue to hold us as we work through crappy-mental-health-brain tings too.