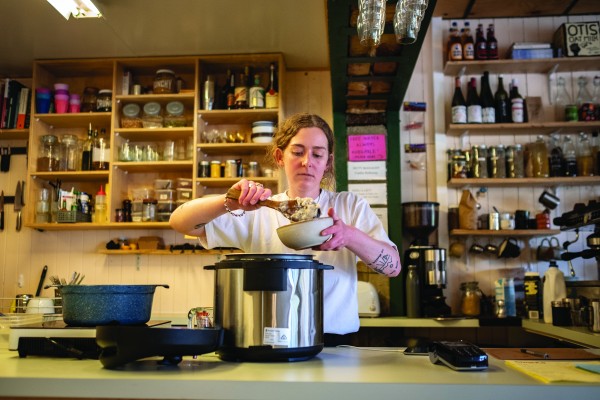 The Faces Behind the Feed: The Stories Behind Dunedin’s Most Iconic Cafes

Dunedin loves its legendary cafes. They are meeting places, study spaces, a place for a catch up with friends, a gig, or a date. Our social lives, as well as our energy meters, revolve around these spaces. But there’s a high chance that we don’t know the stories behind these places, or the faces of who own them. The faces who have dedicated much of their lives to the Dunedin hospitality community, working to serve us endless amounts of food, drink and a sense of community day in and day out, even when the going gets tough.

One of Dunedin’s oldest, and most iconic cafes is Governor’s. Having sat on George Street across from Knox Church for 42 years, Governor’s has been a quintessential part of the Dunedin scene for decades. Its old timey charm pairs well with quirky decor and an array of treats to feast both your eyes and mouth upon. It also has a bathtub in the bathroom, and while you can’t actually take a bath, it’s still pretty cool. The current owner, Heidi Proctor, took over about three and a half years ago, and describes the place as ‘magical’.

Governor’s was opened in 1977 by an Otago student named Paul, who to this day is a local legend, albeit now café-less. Heidi says Paul – commonly known on campus as Koro Mac - “still comes in every day. I once asked him if he imagined it would be going all this time later, and he’s amazed it’s still open. It’s been a student place since then,” she says. “We really love it here, it has so many stories,'' she explains further. Whilst Governor’s serves all types of people from different walks of life, it still remains a student orientated place. “You can tell they’re students, Dunedin has that vibe about it. The students are great, they are what makes Gov’s and what makes Dunedin. They’ll buy their $2 filter coffee, sit here for hours. They support us really well.” Heidi said that graduation is always a highlight during the year, it’s an event that comes full circle. “Graduation is cool, people who came here as students now come where with their kids when they move to Dunedin, everyone knows Gov’s.”

But like most businesses, Governor’s found it hard when Covid-19 hit. However, Heidi and the crew remain optimistic about the future. “We just rolled with the punches. Since we’ve been back, it’s been so busy. We’ve been fine, things are different, but the majority of people have understood we have to do what we have to do. It’s important to keep it going, even through these shitty Covid times. It’s a Dunedin icon, but we’ll do what we have to do to keep old Gov’s going.”

Another Otago staple is Dispensary, which sits on the corner of Grange and Albany Street, next to OUSA, jointly owned by Nick Scott and Jo Verberne. It’s hard to resist, from aesthetically pleasing interiors to illustrated takeaway cups with little creatures etched into them. Dispensary has also managed to make vegetables fun; the salads slap pretty hard.

Dispensary came into existence after Nick began to become disillusioned with the world of finance and management, and began to think about what really made him happy. “I got brave and quit all my positions and jobs. I’d always had a connection with hospitality,” he explains. His strong sense of community and hospitality experience led him to founding Dispensary, as well Common Ground Espresso.

Nick describes the feeling of being part of the student experience as heartening. “It’s really awesome, that people come here most days right through their university career. To be a small part of their journey is really special. When you have a captive element with the staff and students, you build those relationships and that’s when hospitality becomes genuine and real.”

As for its customer base, Nick says “if there was a unilateral quality to the people that come here, it’s that people that are drawn to the products that are real and made with quality ingredients with flavour. It’s not flashy, super expensive, there’s no blue cheese. We get so many people here, there’s a whole spectrum right from the students to the lecturers. People remember who you are, what you have, it makes it feel like it’s partly yours.”

When Covid-19 struck, Nick says it’s “obviously a dreadful occurrence. It’s an unfortunate reality. It was shit, it sucked.” However, since reopening after lockdown, Dispensary has managed to remain as popular as ever. “It’s been great, I thought with how affected it was going to be that the whole year was going to be a write off. I wondered, how are we gonna get through this?” Despite the circumstances, Nick explains that the experience is still incredibly rewarding, especially when it comes to being able to operate successfully in line with his core values and the sense of community that comes with it. “That’s what I get the biggest kick out of, you make wonderful relationships with people in the business, you have positive effects in the communities around us. Strip it right back to people, service, quality and values and it can still be successful.”

Dog With Two Tails is another long running Dunedin establishment, which combines the best of coffee, alcohol and music. It’s a hub for musicians, creators and students alike. Customers often find themselves perched among the leather chairs, sipping on long blacks or sharing a drink by the stage at ‘Bark,’ the room next door. They also have excellent cinnamon scrolls, and metamorphic silver contraptions, which make up a distillery in the corner. Michael, who currently owns Dog With Two Tails explains that after owning a number of cafes in the UK and Malaysia, he decided to return to New Zealand to start a project here, buying the business off his brother. Despite many challenges, tough profit margins and the difficulty of running a hospitality business in New Zealand, Michael continues the operation because he believes Dunedin needs this space, especially when it comes to drinking and gig culture. “I believe Dunedin needs a space like this, I like the way people drink here. It’s not a raging drunk place. Anybody can come here of any age. People can see a great show, in a sensible way,” he says. Michael aims to focus on live music, comedy and poetry within the space to encourage local artists and musicians. “We’re trying to create a space for local musicians and touring New Zealand musicians. It’s an intimate venue, artists love to play here.” Dog With Two Tails also attracts an eclectic mix of people at all times, depending on what the day, time, gig or deal is. “Different times of the day we get different customers. We tend to have the people who don’t work, retirees, artists and creative types come through. People on their break from businesses, the suits come in. Students come and work from the cafe. The evenings are a complete switch over, it’s all about whatever gig we’ve got going on. Some are intellectually bent, or just nerds,” he chuckles.

When Covid-19 hit, Michael explains it’s been a “bit of a burden” and that the place was just beginning to break even before Covid. However, despite considering having to throw in the towel, the business remains running, thanks to the community and the campaign to Save Our Venues. “Quite frankly, I would’ve loved the opportunity to say fuck it, Covid hit, we have to shut the cafe. But during lockdown with the campaign to Save Our Venues, all these people in Dunedin came out [donating money] and it touched me. It made me realise how important this place is to people. Most of the donations were from local musicians, giving up what little income they had to preserve this place.” Thanks to all the local support and a strong sense of community, Michael and his team feel “compelled to keep going”. “The community is a huge part of this, no one in their right mind would take this on if it wasn’t for the people.”

Finally, there is ADJØ, a much younger cafe that has taken the Dunedin scene by storm. Tucked away on the sunny side of North East Valley, ADJØ is a Danish inspired cafe, which combines art, creativity and community. One could describe the space as whimsical, and honestly, it passes the vibe check. There are beautiful wooden benches you can sit on while sipping on their homemade chai latte, and it’s an excellent spot for people watching. The artwork on the walls provides no shortage of entertainment and illusion, and the porridge also slaps pretty hard.

ADJØ was started by couple Caitlin Holloway and Jonas Jessen Hansen. “As a couple, we always wanted to open up a space that combines the things that we want to do in life. He’s always been into creating gallery spaces that are community orientated, we found in Dunedin that space didn’t exist,” says Caitlin, who’s been involved in the hospitality industry since she was 15. “We wanted a space that combined my passion for making food, and art. We’re an art gallery and a cafe, but we want to be a hub for our creative community, and make it accessible.” she explains.

After searching all around Dunedin, the couple stumbled upon a sunny spot in North East Valley and began creating the space, opening up just last year. Since then, the student community has slowly started to trickle in. “It’s been recently that students have figured out who we are, it feels really great because our goal is to provide a space where people can do things that are nice, and contribute to their life in terms of cultural experience.” Accessibility is also a big focus for the business owners, who host community dinners or promote two for one porridge deals to get people excited. “Students get written off a lot in Dunedin, and it sucks, because they get super passionate and excited about stuff.”

Like all other businesses, Covid-19 did impact ADJØ, but in retrospect, it had a silver lining. “Because we have such strong ties to Europe, all our friends were losing their jobs before we were. We ordered enough stock to last until the next day, instead of assuming our events were going to be on, we assumed they were going to be cancelled. By the time Covid hit, we had no wastage, we only had two staff, and the wage subsidy covered us completely. We took it as time to recoup as a couple, we hadn’t had time to sit back and talk about funny things, we talked about the business for a year. After that we got busier, the last couple of weeks have been the hardest, it’s hard to predict what’s going to happen in the next couple of years,” she says.

Despite the interruptions, Caitlin says that “it feels cool waking up and going to work in a place that we’ve built. We’ve got such a cool team. Everyone is so epic and hardworking, it’s rewarding. We have the greatest customers, they’re so sweet.”

All in all, these cafes and venues have spanned across different times, serve different foods and have different owners, but there is one underlying factor that ties them all together - the community. It reminds us of the importance of supporting our local businesses, our community, and most importantly, drinking lots of coffee.