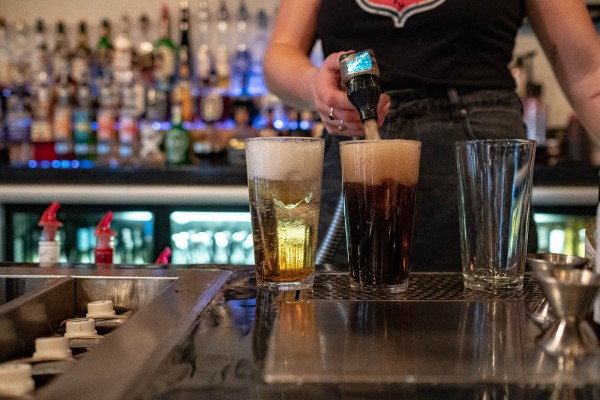 The Cheapest Drinks in the Octy: A Drunk Investigation

Everyone knows the key to going into town is pre-loading. Without doing this, we would not only freeze to death, but be sober enough to realise that town is shit and we should be in bed. It’s also the cheapest option, and can be the best part of a night out.

But regardless of how much you pre-drink, one thing is for sure: Every time we think it’s a good idea to buy a drink, the bar robs us of our money and slaps us with an excruciatingly large bill, which we discover the next morning along with $1.75 left in our account and chunny next to the bed.

If you can avoid buying drinks in town, and are luckily hammered enough to go without a Jägerbomb from Suburbia, congrats. But if you’re ever in the situation where you need a drink before you fall asleep outside the Trojan Turkish store with a lamb kebab in hand, then make sure you take notes of where the cheapest drinks in the Octagon may be*.

Starting the crawl, Ratbags was the first on the list. Because Ratbags and Innocent Bystanders are essentially the same business, and IBs is pretty much only ever open on Saturdays, Ratbags was the only option we could hit. Unfortunately, as much as I would kill for that half-price half-metre pizza, now was not the time.

After casing the joint to find empty tables at a weird time of night, we questioned the drink prices in the bar. One of the cheapest options was house spirits, such as vodka or tequila, for a respectable $9. Non-house spirits, like Bacardi, would be an extra dollar. Tap beer and cider, such as Speights or Mac’s/Somersby were the cheapest option at $8 a glass. Their special at the time was $9.50 mulled wine, which would probably be like drinking hot piss, but would undeniably warm up people stuck in a crop top or muscle tee regretting every life decision they had ever made.

Next on the hit list is a place catered to the posh kids who had a university fund from birth. If you don’t know where Carousel is then firstly, join the majority of other students below the age of 30, and two, you’re poor (sorry). Climbing the stairs east of Suburbia, the warmth of the fire hit, the fairy lights were on, and I was immediately seduced.

As much as I would have loved an $18 cocktail shaken by the lovely bartender, unfortunately my wallet said no. So, I made the ballsy decision to ask, in such an establishment, what their cheapest drinks were. Coming in at number one was a bottle of Corona or Heineken at $9 each, but don’t worry, the lemon for the Corona was free. Following in the footsteps of Ratbags, Carousel also offered mulled wine at a competitive rate of $9 a glass. But would it be worth it? Doubtful. House spirits were a common $10 per drink, and if you were feeling extra generous, feel free to indulge yourself with a lovely bottle of Laurent Perrier Grand Siecle at the StudyLink-ruining price of $540. Poppin’ bottles in the ice, getting slizzard.

I don’t know about you, but Suburbia was my first year hotspot, my weakness. Every Saturday you would find me there, just trying to get into one of those goddamn toilets outside and standing in front of that massive fucking fan. Upstairs is cute, and their pizza is *chefs kiss*, but as soon as you topple headfirst down those dungeon steps - it’s over for you hoes.

If you get in early enough, for example you want a big boy pizza and chill, they offer a litre of tap beer for $10, which is almost two pints, therefore works out as a pretty affordable option. When we arrived, they informed us that they had $9 house spirits, which is a win, however it was the same price for tap Speights or cider. That night, due to a massive stock of Alize for whatever reason (perhaps they were channelling the Far North), they offered us $6 Alize Bleu mixed with whatever non-alcohol we liked. I smelt a bargain, along with what can only be described as blue jelly beans. Although it wouldn’t get you as munted as tequila or any other non-fruit liquor, a sweet drink for $6 was too good to pass on. Thanks, Suburbia.

Every time I look at Mac’s, all I can hear going through my brain is the “Mac’s Brew Bar, in the Octy” advertisement that plays on my car stereo at least three times a day. When will it end? I also recall the feeling of hot vom running down the back of my leg and never finding the perpetrator.

Mac’s was pretty lacklustre on a Thursday night, however boasted pretty good tap beer, most coming in at $7.50 a glass, not to be confused with a pint, which was between $9.50 and $11.50. Their tap cider was also the cheapest option. In terms of wine, you could snap up a $9 glass of Lindauer, Sav, Noir or a Chardonnay but, let’s be honest, the only time I’m voluntarily drinking wine is when I get a whole bottle from New World for $8.99. Much like the other bars, their house spirits were $9, however their resident deer head was free to look at. Weirdly, their real deals seem to be on Sundays, which isn’t a good booze cruising day but with full Speights and Cider pints at $7.50, and a pint WITH a burger at $11 all up, I could be keen.

Not going to lie, I had no idea this place existed until I locked eyes on it early Thursday night. Who is she? How do you say her name? Is she Irish? Niall from One Direction is shaking in his boots. She also was playing AFL on the telly, and for that, she lost in my books.

To describe the environment that night would need an essay. But to sum it up, they had the nicest bartenders who entertained my questioning, however my friend described it as “a place for people in their mid-20s who think the Beatles are the peak of music” and added that “you could probably pick up a recently divorced Caucasian mum here”.

The cheap drink ranking found Speights on tap the winner at $7, but conveniently they were out. Therefore, tap cider as well as house beer (on tap) was $10, and craft beer was a spicy $11. When they get Speights back on tap, let me know, otherwise the presence of parent-types singing ‘Come Together’ and too many Ed Sheeran songs were enough to send me running.

Vault 21 is a controversial club in Dunedin, purely for the fact it has the AUDACITY to charge a door fee. At the time I went, it was full of middle-aged couples, an indication of the fact it was way too early to be in town. But this place is nice, I had no idea. Was I going to save money in this place? Absolutely not.

The cheapest drink was a soft drink coming in at $4.50, and by this point in the night, that’s all I could afford. Beer on tap was on average $10, with Pure Light beer, the 2.5% shit, the cheapest alcohol at $8, with Speights Gold second at $8.50. If you’re wanting to buy drinks at a bargain, even though most places have similar pricing, Vault isn’t it. But the atmosphere was cute and apparently it goes off on Saturdays, so just preload and hope for the best.

Last but not least, the Social Club. Known for its pool table (probably not), it was chill on a weekday night. Not much to say, but I treated myself to a lovely lemon, lime and Bacardi before my walk home, only to be faced with a closed Macca’s and a Pint Night line that didn’t move at all. However, the Social Club had the cheapest non-special drink, so you win some and you lose some.

The Social Club has a consistent $6 Beer of the Week. This week it was Speights on tap and, to be honest, it probably will always be Speights in this town. Their cheapest wine was $9, so if you fancy a glass of Sauvignon Blanc then you’re in luck. Otherwise their house spirits were $9.50, one of the pricier ones of the night. That extra 50 cents could have bought me an hour of car parking near campus. Haha, jk. Word on the street is that there’s a local’s discount that offers tantalisingly cheap Speights, check it out.

I know what you’re thinking - what about Catacombs/the ashy remains of 10Bar? That’s a valid question. Unfortunately, on a Wednesday night there was no hope in hell of those musty doors opening. Thursday night saw a huge line for absolutely no reason, and it wasn’t meant to be. Call up Catacombs. Or even better - just go get yourself a Cruiser and vorteke it on the dance floor while a first year elbows you in the gut for absolutely no reason besides the fact you’re a better dancer.

By the end of the night, I guess we can say that the cheapest drink in town is the $6 Beer of the Week at the Dunedin Social Club. Although my Alize from Suburbia was a winner in my heart, the uncertainty of ever being offered a deal at that price again crossed my mind when taking into consideration the results. Ultimately, there is no such thing as a ‘cheap drink in town’, so it’s probably in your best interest to bring your box to town and hope no one catches you. Or just deal with the crippling realisation that you’re 23 now and it’s time to stick to flat parties, because they’ll probably be better anyway.

*Drink prices are what was shown on the menu or told to a Critic writer over loud music playing in the background, so Critic is not liable for any drink disappointment in the future.