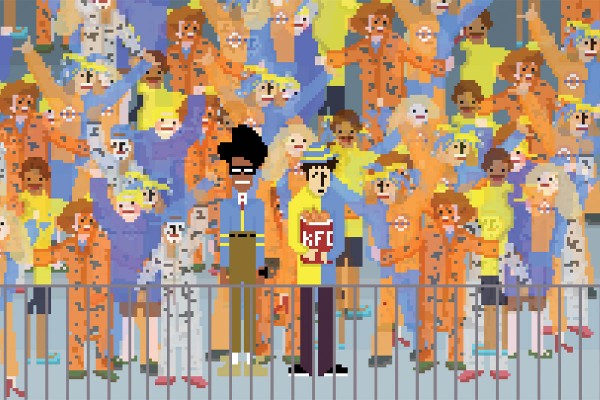 How to Pretend you know Rugby

A beginner’s guide to ‘The Paddock’

When I was a wee lad, we would jump in the car, head out to Grandad’s and watch rugby on his big telly. It was legendary. Yelling, jumping, Bluebird chips; from a young age I was hooked on the culture of this bizarre sport. As I got to uni, and started attending the Zoo (rest in paradise, Carisbrook), I soon realised that the Zoo was, in fact, a historical heritage site waiting to happen. Experiencing the Zoo has an expiration date of about 3 years, and you shouldn’t let your lack of understanding about rugby get in the way of making memories, even if those memories are mostly just yelling and getting sloshed.

Don’t know how to get amongst the rugby? Piece of piss. Here’s your guide for actually looking like you know your shit and you’re not some loser that got amongst to get the obligatory Instagram post with the caption “the lads managed to pull off quite a performance”.

Also, this is anonymous because I legit use these tips in real life and I don’t want my mates to know I’m not a real rugby bro.

Now that you’ve bought your ticket get ready to stand on a seat and stare at “the paddock” (write that down, it’s what the field is called). Take a ‘gram of you and your lads/ladies/non-binary comrades and post that shit with a caption that sows the illusion that you know, love, and bleed rugby. Popular favourites are “Pride of the South”, “chur Landers”, and a carefully-worded quip as if the team have to apologise to you personally in case they lose, such as “the Highlanders sure did well tonight, I might just give them dessert after all”. If there is a streaker, get that shit on your story asap, as the fine men and women that have to chase those righteous runners make for an awesome spectacle.

Rugby tip: The essential social medias for a trip to the Zoo are:
- Instagram, for the post
- Snapchat, for the streaker
- Messenger, to find your mates
- TAB app, to make last minute bets, taking advantage of that 10 second update time

I'm not your mum, you should have looked into what players are playing, bruh. When a pass goes wildly far for a winger to plonk it in the corner, it's understandable if the crowd goes sicko mode. In this ecstasy, simply chew some fat. Be careful not to guess names, though. Much like that one pull during your second year O-Week, you’ll embarrass yourself if you make a wild guess. If you think you could get away with it, you could quickly google the number on their back and make a name connection that way, though.

Rugby fanatic level: You made money on a bet once.

If you really want to pretend you know rugby, you should have a favourite player.
Write this down: Your 👏 favourite 👏 player 👏 doesn't 👏 play 👏 anymore.

Imagine you’re watching your idol play in front of you, and he gets lifted off the ground and suplexed into the grass by a 6”5  beast of a Cantabrian who moonlights as a bouncer, stuff that. Show your mates how much of a rugby veteran you are by pretending you have seen it all before. “My fave player is Daniel Carter,” you’ll boast. “His Jockey ads were top notch, he wouldn't be lifted into the air and dropped on his ass like that, not my Danny boy.”

Rugby tip: Your selection of a new favourite player, and their signature ability.
Richie McCaw (great at scrums).
Dan Carter (great at kicks).
Ben Smith (great at everything).
Your mum (great at ball handling).

Welp, now your cohorts think you have watched Rugby since before it was invented, ka pai.
Now you just need to know what exact game you’re watching.

Chances are you will be watching the Highlanders. You can tell if others are wearing blue and/or gold, like they just raided the St David’s shop of all their cool-as hot-daddy not-lame merch. The Highlanders will be playing another team, so be sure to give that team the full disrespect they deserve by calling them a funny name. Boom, roasted.

THE HIGHLANDERS (Otago + Southland) (our team): The ‘Landers, The Pride of the South, Bender’s Boys, Epic Legends of Incredible Strength

THE CRUSADERS (Christchurch and the rest of the South Island): The ‘Saders, the Men in Red, Canterbury Crushers, Team Christchurch

THE CHIEFS (Waikato and Bay of Plenty area): The Queefs, The Chefs, “name Chef”, The Stinkers

Rugby tip: Channel your inner “Fuck Arana” into a “Fuck anyone who isn’t a Highlanders supporter”.

Knowing what to say is the key to understanding and enjoying rugby. Through some carefully scripted yarns, you might get headhunted to coach the All Blacks, instead of being shoulder tapped by Red Badge security to quit vaping. You’re welcome.

When the whistle goes, look carefully to see if the Highlanders are sadbois at what the ref has to say. If they are, say some chat like: “Aw ref you dickhead, suck on deez nuts.” If the ref is actually doing his job, and the Highlanders benefit from his decision, chew some fat like: “Finally, ref is being fair again.” The poor ref will always be to blame, so please treat them with actual respect, and rip into them like a new bong once you are very, very far out of earshot.

The players are running? Easy stuff, just say “to the 22!”. A rugby field is a standard unit of measurement in New Zealand, just like a Pint of Speights or a fiddy bag. The “22” is a part of the field that players will run at. It’s just that simple, jot it down. All jokes aside, this is really good advice, as the 22 is the exact place you want your team to be, so you’re either advising these geezers to go to their 22 line and win, or to keep the other team at the 22 line and to not score points. A win-win.

Finally, it's time to sink piss again. If your team won, bliss, down some beersies and live on Cloud Nine until tomorrow morning. If your team lost, sucks to suck bro. Either way, you’ve learnt so much, you are no longer that guy that says “aw yeah, I’m not a big fan of rugby” because that is a one way ticket to Boringville, population you. Instead, you’re the mayor of Rugby Town and you can paint all the circles on the road that your rugby-mad heart desires.

Rugby tip: Keep this article in your pocket, for quick access.