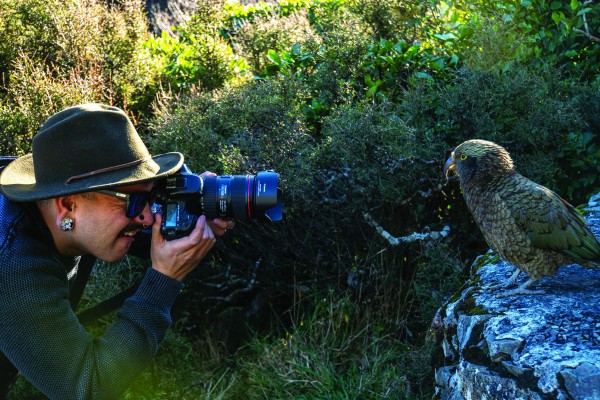 Pete Naik has only sent a dick pic to customers once, and you can see it on page 3. The road leading up to that moment started in Dunedin, and following an unconventional path, it also ended in Dunedin. The same day that he snapped the picture of that pink penis, NZ began to close its borders to non-residents because of COVID, and within a few weeks, Pete’s once-in-a-lifetime job was lost. He shipped himself back to good ol’ Dunners, and Critic caught up with the Otago alum, who serves as an example of how far a passion for wildlife, a good camera, and a strong Kiwi accent can get you.

Pete was a wildlife photographer in sunny, aquarium-dominated Monterey, California: a job that many of us can only dream of. How did he get there? He hustled for it. “I took a less than conventional approach,” Pete chuckled. Following some experience on nature cruises out of Dunedin, he started work as a “bitch boy” on a whale-watching cruise in Cali. Every shift, he’d be in charge of cleaning up vomit, prepping stuff and stocking the supplies - not exactly glorious work, but it put him in the right physical environment. “I was going out every single day watching dope whales (Megaptera dopengliae) and dope dolphins (Delphinus dopus), and I always brought my camera.”

He said that in addition to practicing photography for years, and pushing to put himself in the right place, it helped to be distinctly Kiwi. “I covered up my shit personality with a fun accent, y’know? All I gotta do is just say a few things and all the sudden they’re like “wow, lets tip this photographer!”

Unfortunately, it couldn’t last. “You know exactly how the American coverage of COVID was: it wasn’t seen as much of a threat until it was too late. We shut down operation, the county of Monterey and the state of California closed, and I was there with no work, no income, no support of any kind. I had to book it home. I had to lose that job and all that dope shit. Kinda depressing, innit?”

Isn’t it weird that they don’t have a dorsal (back) fin? There’s a lotta luck behind this photo right there - and a lot of time. This is one shot out of about 50,000 I’ve taken of this animal, and it’s the only one where it’s fully out of the water, fully in-focus, and fully in-frame, and I think only a handful of people can say they have that kinda photo. Google images for it, you won’t see anything like this. Photo aside, I also got some of the first high-quality underwater footage of this animal. In fact, in this one hard drive right here, I think I have more footage of the Northern Right Whale Dolphin than exists in the rest of the world - unless some researchers are hiding theirs.

I’m not as close as it looks - I’ve got a zoom lens on. Generally we’re trying to stay 100 feet (30m) away. But this one, we’re about 50-100m away. Watching them hunt and interact - they’re living in little fuckin’ family groups, mate; you get to know them. My boys! Bumper, Fat Fin, Comet and Orion, to name a few. Fuck, I’d see Orion maybe once a month and it would be like seeing an old mate at a party, like: “Ah! Billy! Fuck! Missed you, mate!”

We roll up to this commotion and we’re not too sure what’s going on - killer whale attack? Nope. We get even closer, this dude rolls over, and this fuckin’ giant pink dick just flops out of the water; in the whale watching community, we call that a “Pink Floyd”. It’s five fuckin’ meters long mate, and it’s rare: even if you go out on the water every day, you might never see one. I had the mic in my hand, and before I even thought about if there were families on the boat, I yelled “THAT’S A PENIS! THAT’S A PENIS!” louder than I’ve ever yelled in my life.

We call this “surface-active” behavior, but I sometimes call it “the splashy fun stuff,” because everyone knows that means. You don’t expect to see much of it on a calm day, but if it’s a rough day, they’ll be going crazy. This day, I dragged like 30 people way out to sea in rough waves, and they hated my fuckin guts for the first hour of the trip. Not the captain (whose decision it was), not the bitch boy, but me: Pete. And then we get there, and the guy you see here starts doing this shit for two hours, and lemme tell ya: the people on deck, their lives changed. That breaching behavior, that is one of the greatest things you can see on this earth, I reckon.

What Pete’s up to now

Despite all his training, experience and jubilance, Pete’s now working for the Uni, filming lectures. If you notice a dashing Samoan dude filming your course, you know you’ve got a real expert watching out for you. It’d be a bit like if David Attenborough was doing the voiceover of your course notes.

It’s not a forever job. He’s got his eyes set on using photography and film to tell the story of Māori connection to wildlife, in whatever role that looks like, and he says that if  you want to get involved or help me with this, that you should reach out to him.

“I feel like that’s a whole other conversation: how a lot of Māori worldview is overlooked in Western society. Have you unnoticed how naturalists, nature people, wildlife enthusiasts, a lot of it is through a sort of white lens? Why? Why are we looking at New Zealand animals through a white lens, rather than a mātauranga Māori lens? Why are we calling them “New Zealand Sea Lions” rather than whakahao or rāpoka?”

Pete said that this idea kinda fucked with him while he was in Monterey, too. “These animals have been here far way longer than King George knew what California was, or whatever, so why wasn’t I looking at these animals through a native perspective?” But, when he tried to look into the Native American’s perception of wildlife, he said, “I never really got anywhere. The native peoples of America are often overlooked.”

When it comes to the USA, Pete will tell you that “the country is more than the people who run it. The country is the animals, the country is the landscape. You can’t judge America by Trump, and just ignore Yosemite, y’know? A lot of people look at what a shit state it’s in, politically, but it’s fuckin’ dope too. Monterey Bay, these animals, they’re fuckin’ cool.”

At the end of the day, Pete says his stint in the USA was the best time of his life. “If I could go back, I’d be back ASAP, but it’s quite nice to have this time back in New Zealand. To reacquaint with Māori culture, to see my best friend Daisy, it’s all good. But I’ll be back over there.”

Pete’s got a great Instagram that you can follow @wildboipete. It’s crazy to think that this guy came out of flat parties at Otago, but considering the sheer quality of nature in our area, it makes sense that someone with such a passion came from here. “With the right attitude, the right passion, you can make it. But it’s not easy.