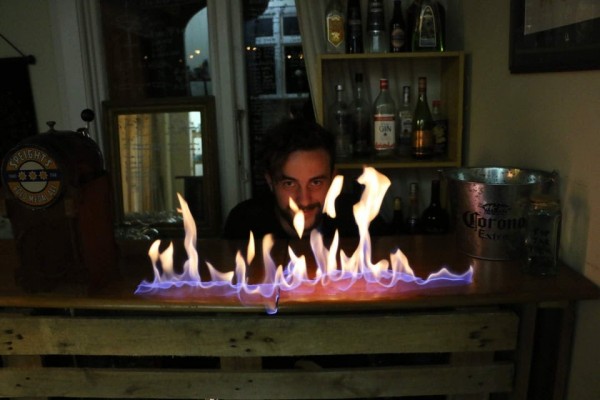 Pallets and their younger brother, the beer crate, are God-tier DIY materials. You cannot fight me on this. This is a universal truth. Between pallets and beer crates you can make literally any kind of furniture known to man. For years, my bed base was four pallets slapped beside each other, no nails or sawing required. For the last three months there has been a small pallet tucked away behind my Editor’s desk in the Critic office, just in case I am called on for a DIY project in a pinch. The following projects were done by students with basic handiness, so there is no excuse to not follow the pallet furniture dreams you planned with your flatmates back in January but didn’t know where to start.

Note: Pallets can typically be found around the industrial/harbour area on the side of the road. A car to collect them is encouraged, but not necessary. If you need a trailer, Campus Watch lend them to students for free. If you see a stack of pallets behind a business’ fence, there’s no harm in asking if you can yeet one. All else fails, then the back of Bunnings usually has a stack, and so long as you don’t take the blue ones, it’s fine. Check with an employee if you feel suss. Also, you should probably use a measuring tape in these projects but it is probably fine to eyeball it.

At the start of quarantine, Brad, Peter and Julian got drunk and carried a pallet halfway across Dunedin. They then spent a whole day deconstructing the pallet and assembling it into a proper table, without any construction experience.

Josh and his flatmates knew they wanted to build a bar before the lease had begun, but it took a quiet afternoon and a “couple of boxes” before they launched into it. They did it in three hours, but to be fair they were drinking Flames as they did it, so it probably made them faster.

A saw, a hammer each, nails, two pallets that are the same size, something else long and flat (these guys used the sides of an old broken dresser) to become the benchtop.

Bonus: Fairy lights for aesthetic but also so you can find your alcohol when it is dark and you’re rummaging under the bar.

Step one: Chop one of the two pallets in half so that they are roughly half a meter or less in width.

Step two: Nail these half pieces into the sides of the whole pallet so it forms half a box.

Step three: Nail your long and flat piece of whatever to the top of the half box to form the bench top.

Bonus step: Nail other long and flat bits below to make shelves. Maybe don’t store bottles on it though, just in case.

3. Simple but effective upgrade: Sequoia and her flatmates

This team turned their “prison-yard” chic outdoor area into a cute, prison-yard for white collar criminals. She bought the green turf from a wholesaler on TradeMe.

Ben gives you the pallet table deluxe, featuring rustic (nail) beer openers on every corner and a secondary slide out section to double the length of the table. Legs to be decorated by bottle caps after a post-Covid red card.

A table top (the large rectangle pallets are best for this), 4 “standard” pallets, a packet of 6-inch wood screws, a drill or socket, claw hammer, hand saw.

Ben’s secondary table comes from the tip, so recommends to do the same, otherwise double your pallet and repeat the steps until you have one large and small-enough-to-fit-underneath table.

Step 1: Realise you have a big deck

Step 2: Realise that size isn’t everything if you can’t use it.

Step 4: Realise you’re a bunch of uni students who are broke af

Step 7: Ask the Bunnings guy for some pallets, get told that they put the scrap ones out by the delivery entrance, ask about that one right there with only one sheet of gib on it, get told “yea bro. Go hard.”

Step 9: Realise you forgot the 6-inch wood screws and go back to Bunnings**

Step 10: Using a claw hammer, pry apart the scrap pallets to individual bits of wood, you will have “frames”, “slats”, and “spacers”. Make sure you save the nails. Also make sure you leave the gib pallet as that’s your tabletop.

Step 11: Nail together two “frames” of the scrap pallets to make one leg. You need 4 legs. The “slats” of the pallets will be used later as leg supports.

Step 13: Cut holes in the corners in whatever side of the gib pallet you want to be the bottom (often one side is in much better nick, you want this to be the top) holes should be cut so that the legs can be screwed in directly from the top as well as the sides for stability.

Extras as seen in photo:

Step 16: Half hammer in two nails close together at each corner on an angle, ensuring they will open beers.

Step 17: Flatmates acquire secondary tabletop from dump, realise that by pure chance it fits perfectly under the current pallet table.

Step 18: Using “spacers” and “slats” construct a cavity below OG pallet table in which the dump tabletop will sit.

Step 19: Slide dump tabletop into cavity and decide which end you want it to slide out from. At the opposite end, secure a “spacer” to the top of the dump tabletop to prevent it sliding all the way out.

Step 20: Using “slats” construct legs on the slide-out side of the dump tabletop, also using other slats as cross supports to stabilise the legs.

For more photos of these hallowed constructs, see the pdf version of the magazine at the bottom of the home page.