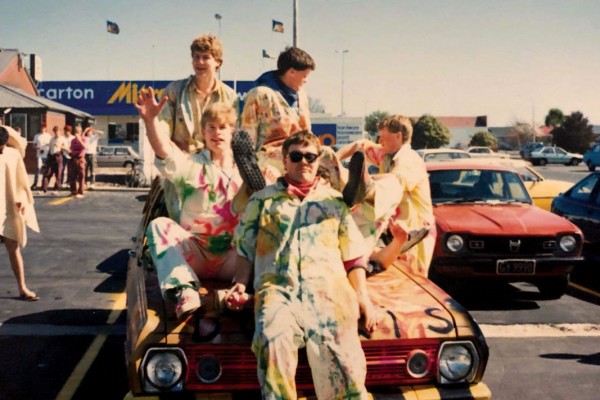 Now existing only in memory, the Undie 500 was a longstanding event facilitated by the Engineering Society of Canterbury (ENSOC) which spanned from 1988 to 2009, in which contestants would purchase a warranted and registered car for less than $500, decorate it, and drive it down to Dunedin from Christchurch. Beginning as a hitchhiking race, the event grew into a spectacular facet of student history. Founding member and Sports Officer of ENSOC, Matt McCloy reminisces on the Undie 500’s humble beginnings.

The inception of the Undie 500 began in 1986 with a hitchhiking race from Christchurch to Dunedin, “but not many of them made it”. The following year they made a $300 rule to buy a car and go down, “but then not many of the $300 cars even made it. I don’t know if ANY made it.” Undeterred, Matt and his friend Pete Taylor decided, “right, $500, buy a car, do a race down”. They purchased a Holden Special 186. “It was great, it was called Doris.”

Decorating the cars was always part of the event from the start. “It evolved from the Engineering Ball [in 1988], where our friend Buckweed was driving his wannabe girlfriend home, and we decided  we’d pick up some road signs and a few other things on the way home.” With a carload of “probably seven or eight of us,” they ended up getting home with “quite a lot of road signs, and those big flashing lights” in the back of the car.

They quickly stashed all the evidence in the garage, where they found “all this horrible paint from the landlord” which they disguised Doris with. “So, we thought, right, we better have the Undie 500 next week.” The inaugural Undie 500 that year comprised of about 12 or 13 cars. “We did the rules up and invited a few people […] there had to be a sober driver, who drinks a couple of jugs at the last pub, the Gardies. It started at the Bush Inn [in Christchurch].” Matt’s son Ben had taken him to the site of the Gardies recently and pointed out that Matt was “almost crying when we went to the Gardies,” [now the Marsh Study Center on Castle Street]. Matt frowned at his drink. “It’s disgusting there. There’s no requiem or anything.”

That first event was attended by all the boys who had been part of both the hitchhiking race and the $300 car race. “They were all the mechanical engineers who supposedly knew everything.”  As the official driver of Doris, Matt “picked those guys up, because their car had crapped out”. They ended up picking up two other carloads, in the already full Holden Special. “We ended up with like 14 in the car. Big bench seats, four in the front, four in the back, then another few in the ‘back back’.” As carloads broke down, the other cars picked up as many of their stranded cohorts as they could. “We were a bit full over the Kilmog.”

The following year, the convoy had doubled to about 25 cars, including Doris with a brand-new paint job for a second voyage. “We were the only ones to use the same car from the previous year.” In the third year of the event, attendance had doubled again, with around 50 cars paving the way down south.

Matt was involved in the event for three years before passing the torch down through ENSOC, likening it to the Engineering Ball. “We used to run that, too - 600 people, open bar. There were enough people rolling on so that it just kept going. There were always people willing to step up and do shit.” His voice betraying a touch of ENSOC pride, he pointed out that ENSOC is a very historical society. “It’s one of the oldest societies in New Zealand, dates back to the 1880s. So, there’s quite a bit of passing the chequebook on [...] Quite a good group of people to do shit with.”

In what can only be considered a heroic effort, Matt sheepishly recounted a car going up in flames.  “Look - it was an environmental disaster about to happen that some petrol was going to run into the gutter. So, putting it on fire was saving the environment. The fact that it ran up the gutter and went into a car had nothing to do with me.” This and other shenanigans were part and parcel of the Undie 500, which steadily grew larger and larger, attracting national news coverage in later years with riots occurring from 2006-2009, culminating in a highly negative public opinion towards both students and the event itself.

Eighty arrests were made over the two nights of the 2009 Undie 500 event, which saw police slowly pushing the crowds back with pepper spray and riot shields as rogue bottles and bricks rained down on their riot gear.  Firefighters were in attendance to control many blazes which broke out, threatening cars and flats. As a result of the 2009 carnage, the Undie 500 was cancelled by the University of Canterbury Students’ Association (UCSA) due to the inability of ENSOC to control the behaviour of non-students who were turning up to the event in droves.

Matt was saddened when the Undie 500 in its original form was cancelled, attributing it to “the closed-mindedness of councils [...] NZ is a great place - let people be intuitive, get on, be innovative and do shit … part of that is people having fun.”

Doris the Holden Special now lies in her final resting place, buried “in a spot by my old man’s farm, down by a riverbed”. As her bumper corrodes with the years and she returns slowly to the earth from whence she came, she revs on in the memories of those founding fathers who breathed life into her.