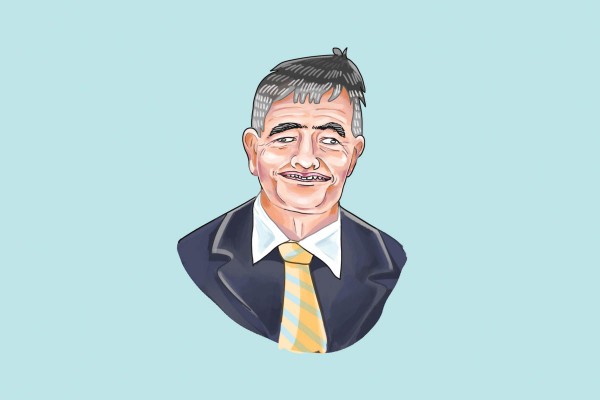 Mayor Dave Cull is a sultry, smooth sultana. His body is hesitantly tanned, his hair windswept to a salt and pepper slick. If I had to liken him to an animal, he would be a seagull. Did I mention he’s an Aries? He greets me warmly and leads me into his office. The door shuts behind us. We’re alone.

Born and bred in Invercargill, Dave studied Politics at Otago University, where he resided at Arana. “The food was nothing like as good as you get now. We used to joke that the cook would put carrots into everything, including desserts.”

His eyes crinkle when he smiles. The University was a lot smaller when he attended, comprising of around 4500 students - “much more intimate and more personal,” he murmured.

The legal drinking age was 21 back in his day, and police prosecution would come down hard on bartenders for serving anyone underage, so Dave and his friends devised a clever drinking scheme: “My friend saw an advertisement in the paper for the police auction, where police sold off confiscated things like bikes that nobody had claimed. So we went down and brought two-dozen beers for half the price it would cost in a bottle store. I even wrote a letter to the paper advising students not to risk prosecution by going to the pub, but just go to the police auction and buy beer there instead.”

After his university years, our beloved Mayor had a flourishing career in home interiors. “I did a lot of magazine articles and [wrote] 13 books.” These books include such popular titles like: “You Can Paint It! Techniques and Tips”, “The Great New Zealand Kitchen” and “Complete Kiwi Home Fix It”. Sadly he never wrote for Critic, saying he “didn’t get the opportunity”. From books, Dave became a television presenter, hosting such lifestyle and home improvement shows as 'Home Front’. “There’s two rules: keep it simple, and that function should lead form. Don’t design something to look absolutely stunning if it’s going to be a nuisance to live in.”

Sadly, this love for décor hasn’t exactly translated into political work, but Dave shared with Critic his design vision for the future of Otago Uni, which is looking good with the recent $20 million investment DCC is putting into the area over the next two years. “I like the idea of pedestrianising areas; putting in street furniture, basketball hoops and pocket parks for people to just stop and relax.”

He chuckles for a second, a deep tinkling laugh, before resuming.

“I wanted to put in fire pits because we don’t want bonfires, so I thought ‘maybe we should just put in fire pits which are really safe’, and then when people get sick of their couches, they can just put it in the fire pit and light that. I didn’t get enough votes for that one.”

Honestly, a couple of basketball hoops is the least the Council can do. Dave admits, “From a purely financial point of view, the community and the Council take a lot of rates off North Dunedin area. You’ve got areas like St Kilda, where the average quarter-acre section has 2 or 3 people living off it, but down in North Dunedin it’s more likely to be 15; they’re all paying full rates, so it’s worth it for the Council to be invested in that area.” However, the Council is limited with the amount of upgrade they can do in North D, since “we’d be immediately asked why we’re not doing it in Caversham”. I guess maybe look out for a nice bench in your local area, coming soon.

Dave and I were getting on pretty well at this point, and so I was afraid to ask the next question. Asking a Dunedin Mayor about his thoughts on student drinking is like asking a Young Nat if he’s a feminist: you already know the answer. But, like a sweet goon, I sucked it up and raised the dreaded question - how has the DCC impacted student drinking culture? “Oh, I don’t think we’ve had any effect at all. I think it’s fair to say that NZ has a drinking culture problem.”

They’ve certainly tried to intervene, though. “We’re really aware that there are strict laws about minimum pricing in bars, but there are no strict laws about minimum pricing in bottle stores and supermarkets.” Displaying his richness, he continued. “We reckon that alcohol is dirt cheap, so young people perceive that they can’t afford a drink in bars and they drink to excess outside bars, so we wanted to control off-licences more and make bars more attractive.”

The trouble is, the DCC is targeting off-licenses without making on-licenses more attractive. When asked if the DCC would do more to lobby the Government alongside OUSA to remove minimum prices in bars, he shrugged me off with “it’s a matter of weighing up the pros and cons, but also the whole package”.

The DCC tried to resist the density of bars in North Dunedin but was shut down by the Alcohol Authority in Wellington. They also restricted off-license hours to between 9am and 9pm so if you’re ever stuck at 10:30 wondering where you can buy a shitty shot bucket, blame the DCC. Basically, it’s a bit shit they continually hit off-licenses without ever offering to improve on-licenses, especially given Dunedin’s super strict BYO policies.

However, Dave did play a part in keeping Hyde Street running when it was looking like getting shut down: “I thought it was better to put safe controls on the Hyde Street party rather than banning it.”

Differences aside, Dave and I were able to collectively bitch over BYO policies. “It’s BYO, right? So I go in with 4 cans of Guinness, and they say ‘no you can’t bring that in, it’s beer’. They only take wine. I just think that’s snobbery.” Imagine being a minimum wage worker at an Indian restaurant and refusing to allow the Mayor of Dunedin to drink some Guinness. Big. Dick. Energy.

Another major issue that impacts students is parking. Recently this year, the DCC installed more Pay and Display parking meters around North Dunedin, and proposed that 185 free parking spaces around the student areas be transformed into metered parking. Did the DCC consult students on these changes? The short answer is no. Dave says: “We probably didn’t knock on flat doors and ask them how many parks they need on the street, partly because most developments are expected to have onsite parking. So not a huge amount was done.” Cull expects some parking pressure to be eased with the new hospital which will be required to have a greater number of parking spaces for workers and patients.

Overall, Mayor Dave Cull sees his legacy to the city being the Strategic Framework which helped plan for “what is this city going to look like in 15 or 20 years”. He’s also proud of Dunedin’s newfound international presence, especially in China. Dave’s had nine years of being top dog, but he’s not running in the next council election.

So with a lot of free time coming up, would he consider a stint on Dancing with the Stars? After all, Tim Shadbolt famously stirred the collective loins of men and women everywhere with his rendition of the tango. Mayor Dave Cull looked at me with his twinkling grey-blue eyes, smiled slightly, and said “no”.

I thanked him for his time.