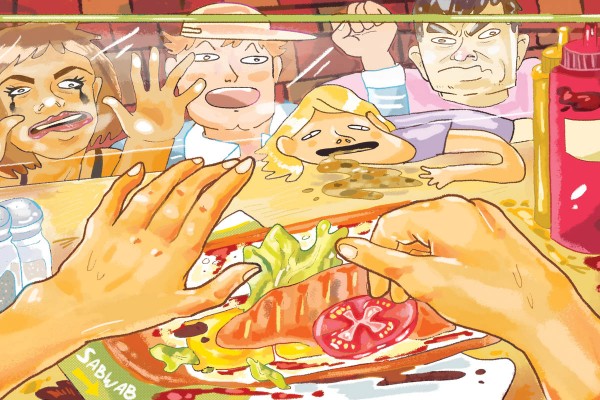 Ever wondered what life was like on the other side of a row of tequila shots? Critic talked to the people that see the ugliest sides of all of our nights on the town. The following people have had their names changed so they don’t get @ed, but they are all current students and probably best understand the fine line between having a good night out on the piss and just being a sloppy cunt.

Bartenders cop a lot of flack at the best of times, but receiving flak from fellow students is worse for Britt, who worked part-time at one of the Octagon’s most popular bars. She told us how much of a pain students can be on the piss.

Most of Britt’s shifts began at 11pm and would end around 5 or 6am. “If we had events it would be so messy and disgusting. We had no cleaners at the bar so we were cleaning vomit, blood, you name it; there were all kinds of different substances all over the floor.” Like many jobs in hospitality, her shifts never had a set end time, and breaks were few and far between. “If I did have a break it would be for like 15 minutes or one 30 minute break in an 8-hour shift.” Technically that lines up with employment law, but it’s still a rough gig.

Fights are a regular occurrence in the bar and the wider Octagon, she said. One time she witnessed a couple have a dramatic break-up. Two girls confronted the guy and one threw a drink over him “like something out of a dramatic movie scene, it went all over him and all over myself,” she said. “I was like, this job sucks, I have to leave.”

Girls were often the worst behaved. “It’s sad to see how drunk and out of control some of them get. I think some people just shouldn’t be coming to town after a night of drinking.”

Although working in the Octagon was Britt’s first bartending job, she thinks it will likely be her last. “Being a bartender put me off town so much. I think two weeks ago was the first time I went to town since working [at the bar].”

Subway workers’ official titles are “Sandwich Artists”. Critic spoke with one such artist who is nonplussed about the title, though we suspect she was just putting up a front.

According to Sam-the-artist, making sandwiches for drunk cunts is harder than you’d think. She is eternally grateful that Subway is now only open for 24 hours on a Saturday, unlike over the summer. Still, the hours are long, with a shift spanning 10.30pm until 6.30am. “You’d expect it to be really quiet because normal people don't get sandwiches at 1am, but it's always so busy. The nature of Dunedin is that there's always an event on.”

She’s found that drunk students aren’t the most annoying types of drunks to deal with, though. “Middle-age people aren’t there for the banter like the students,” she said. Sometimes drunk students can be her best customers, and that both parties can have a good time. “People are in the best mood and they don't care so much about you doing your job perfectly.”

That being said, “dumb drunk boys” are the most intimidating demographic. Sam-the-artist has had to deal with them genuinely getting angry when staff won’t unlock the bathrooms or when they find out Subway doesn’t have PayWave. Her pet peeve is when drunk students have been standing in line for 10 minutes and still can’t decide on what bread they want. “Know your bread, and have a backup bread because we do run out of stuff,” Sam-the-artist advises.

While she wouldn’t comment on any specific dramatic incidents, she said security “definitely keeps things in line. They have no problem kicking people out if they get aggressive. I haven’t felt particularly unsafe, although I've felt frustrated. When people are drunk it just makes the job that much harder.”

“Sometimes I hate how much I care about this.”

There isn’t anything more iconic than a BYO with the squad.

Apparently customers aren’t the only ones who think the one-between-two BYO rule is bullshit. According to Debbie, a duty manager at a popular restaurant near studentville, “BYO rules and limits illustrate, to me, a clear disconnect between council and students. It clearly demonises students into the stereotype of binge drinkers and glass smashing idiots. Yes, some do that. But the vast majority of thousands that go to uni don't; they just want to have some wine with a curry or pizza.”

Despite this, Debbie said that the vast majority of students that come to her restaurant for a BYO are “terrible” to deal with. Debbie said that when she is forced to confiscate obvious illegal amounts of alcohol from patrons, some make every attempt not to pay for their meals.

While all chain restaurants are run by greedy capitalist scum, and stealing from them shouldn’t be unethical, at the end of the day it’s Debbie whose ass and paycheck is on the line when this happens. “It's about a $10,000 fine for me and $2000-$5000 [for you] if you get caught by the cops breaking BYO rules.” She can’t help it, but now she hates seeing groups of students turn up at her restaurant. “It's too much of a risk [to let them drink more than the limit]. I'd get the huge fine and I'd never be able to manage a restaurant again.”

Debbie’s often heard patrons making sexist and racist comments about other patrons loud enough for her to hear. On one occasion, she returned from telling her staff about one particularly Islamaphobic comment, for a patron to then abuse her for “violating his human rights” by “mocking my political views”. Personal and “vindictive” insults were then hurled towards Debbie, who could remember shaking with horror and embarrassment.

“The reality is that there isn't a great reputation for drinking culture in Dunedin because there are no places for students to drink safely and responsibly, like student pubs [...] that create safe environments [in which] to change that culture.” Instead, she says, “the DCC treat students like burdens instead of seeing them as the assets they are to this city”. She sees BYO rules as “a shitty solution to a problem the Council has created” and that duty managers are “sick of being treated like the bad guy”.

Drinking at home might be cheaper, but if you hit the town to drink, your mess is not your problem. That’s where Cam the Cleaner comes in. He cleans a venue near campus that hosts a multitude of events, and when he closes his eyes, he can still smell one 200-plus person event he cleaned up after. Specifically, the two toilets (one in the mens’ and one in the ladies’) that were allocated vomit toilets. “That actually made it a lot easier to clean to be honest,” he said, “because it was all concentrated and everyone managed to get it in the bowl. Or on it anyway.”

Although that event definitely left him more mess to clean up than usual, he doesn’t think this has anything to do with them being students - just that there were a shit tonne of them. “All the bins were beyond overflowing by the time I got there. [...] more than a few were pretty fucked so I doubt they were really thinking about [the mess they were making].”

Somehow worse than the vom toilets was that someone had “clearly deliberately” shat and smeared their it “all over the floor in one stall right in front of the toilet. That was so fucking foul.” He later added, “Seriously fuck them. Unless they were getting off on it, there is straight up no reason to do that.” Cam did recall that there were also bins full of condoms, so perhaps people WERE getting off on that.

Do everyone else a favour and next time you have a night out on the town, try not to be a massive twat. Start by respecting the people who are just trying to do their jobs.