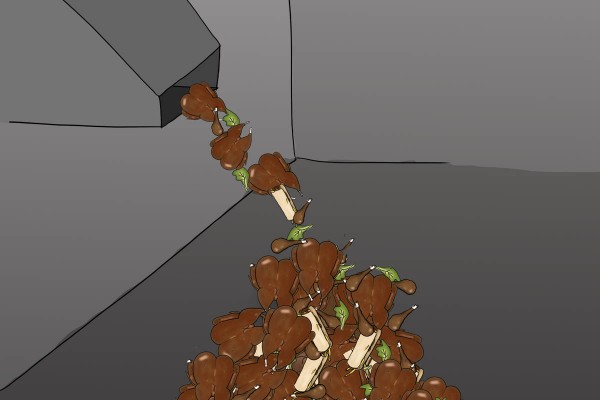 Waste Not, Want Not: The Abysmal Food Wastage in Our Halls

A recent UoO Meaningful Confession claimed to be a kitchen worker at an unspecified college, and mourned having to throw out an outrageous amount of food: “Entire tray of rice? Bin. 15 legs of chicken? Bin. Tray of veggies, salad that has barely been touched, and oohh, that one time I had to toss like half a tray of enchiladas.” Lamenting that the food still had been “just fine that night” the employee said the ritual is their “least favourite part of the night and I feel terrible having to throw away all that perfectly good food that could go to people who really need a meal. We are given a meal at work, which helps reduce waste a little, but we aren't allowed to take anything home for flatmates.” Always keen for a good bitch about the University, Critic decided to delve deeper.

2019 is undoubtedly the year of white girl environmentalism. Everyone wants a slice of that sweet, sweet vegan pie, most of all the University of Otago, who was quick to jump on the “no disposable cups” bandwagon in their cafes earlier this year. Never mind that this policy, while a nice token gesture, is actually just a capitalist ploy to eliminate an outgoing expense and instead push that cost onto consumers in the form of keep cups, while remaining smug and elitist about their ecological efforts. But y’know, stay woke and all that. In the face of this environmentalist circle jerk, it’s surprising to find out that our beloved institution perhaps isn’t as clean as promotional marketing might lead you to believe.

Unlike most things on the Internet these days (sexy singles in my area? Um this is Dunedin, hun) the UoO confession seemed legit. Several other kitchen hands came forward with similar stories of excessive food waste. Susan* spoke of repeatedly throwing out half to full trays of veggies and chicken “lots of stuff that would compile a perfectly good meal for someone who needed it”. Worse still, the college doesn’t even have a compost bin, but rather everything is thrown into a normal bin, going straight to landfill. And before you shout “biodegradable!” you should know that everything that goes to landfill gets sealed into large cells that are lined with metals and elements to keep the rubbish within from oozing into the soil around it. So, biodegradable means absolutely zilch unless it goes in your garden. Robert* confirmed his college is the same, “none of it gets composted or sent to food banks,” he said.

Obviously in a conversation about food waste, it goes without saying that not everything can be saved and redistributed. Food that’s repeatedly reheated or kept warm for certain periods of time can be dangerous, but all the kitchen hands we interviewed are adamant that the colleges are throwing out food that “could be saved”. Pete* remarks, “the culture in the kitchen was to make far too much food. Running out of foods for students was their nightmare situation, so they almost always made way too much.” In Pete’s college, the bags they chuck out each night weighed often between 15-20 kgs, which was similar to the numbers confirmed by the University. Robert said that the University is aware of this excess, but “instead of addressing the real problems such as the kitchens making too much food, they’ve decided to place the blame on the students instead, stating that the reason there is so much wastage is because they don't eat everything on their plate”. This is consistent with the posters typically found in dining rooms asking students to only take what they can eat since waste is bad. A University spokesperson told Critic: “The most wastage comes from plate waste, when our residents put more food on their plate than they can eat.” They cite that the plate waste from students weighs about 80kgs per day compared to the 20kg at the kitchen production end. Doubtless there’s definitely waste on this end, and both are bad, but just because students make food waste doesn’t mean the Uni should ignore their own.

University food waste is typically due to strict health and safety policies that prohibit food from leaving the premises, and that requires the food to “be discarded” according to University policy. In theory this makes sense, as let’s say if a worker’s flatmate ate some old Arana food and got sick, then the University could potentially be liable. However, KiwiHarvest, a non-profit which redistributes food to those in need, has worked with Carrington College and still works with Studholme College, an initiative which, according to OUSA Colleges Officer Jack Manning, gives “surplus food on whole trays to KiwiHarvest”.

Since some University owned Colleges can clearly navigate the treacherous waters of Health and Safety and help limit food waste, it’s unclear why all University owned colleges can’t follow suit. A University spokesperson also said, “conference and events food that can be safely used after an event, is given to Food Share,” so again the question is raised as to why this can’t occur more regularly in halls. Last year, OUSA trialled an initiative called ‘Free Food Friday’ where frozen meals saved from UniCol kitchens over two weeks were redistributed to students willing to brave queuing. The trial was stopped because of environmental concerns over the amount of disposable plastic containers being used, but the existence of the trials proves that some kind of scheme like this is possible to conduct. A University spokesperson said that the trial was a “good concept however there were minimal ‘suitable’ meals, with most just being rice and vegetables”. Firstly, rice and vegetables is a decent meal, and a hell of a lot better than most of the MSG bonanzas students are calling food. This argument also goes against what kitchen staff are saying about the substantial waste of proteins, so it’s unclear where the lack of suitability comes into play.

One student lamented on the UoO Confession: “Why can't they implement a system whereby if you are an Otago student with your student ID, you can show up at any of the halls with a tupperware container during a set 15 min timeframe (eg after the students of that hall have gotten their fill) and pay a gold coin donation that goes to a charity of the hall's choosing to get a container of leftovers for dinner or next day's lunch?” This comment got 137 likes (more than my last profile picture fml). This solution may not be the answer, but it’s an answer to a lingering problem of waste that has continued to go unsolved by the University.

A lot of hall employees are disgruntled about being unable to take this food home to their flatmates. This wasn’t always the case. Pete spoke of a former employee that worked at the college halls about eight years ago, where they were “allowed to take the trays of leftover food home and he used to feed his flat for the weekend with this”. Imagine a world where, instead of the standard student fare of 2-minute noodles, a flat might be treated with a lasagne and vegetables every once in a while. Remember how scurvy is a thing again? Yeah.

Jack Manning cites food waste as an issue close to his heart because of his mother’s involvement in KiwiHarvest, but also because it’s kind of his job to talk to us about college shit. Jack recommended a couple of steps the University could take to reduce food waste. The first is to simply make less food. Jack said, “This requires a clear understanding of eating habits of residents, so an audit to understand where waste is occurring (i.e. unpopular meals, days of the week) could guide this process.” The University has been dealing with this problem for years; it’s baffling how they continue to wildly overestimate dining numbers. If you want my opinion, stop serving butter chicken; it’s never an actual curry and I’m sick of this misrepresentation.

Secondly, Jack proposes to “take reheated stuff and keep it in the system and reusing it in different ways (i.e. turning mashed potatoes into hash browns)”. This second step is already taken in small ways, such as recycling dinner leftovers into lunches, but there’re clearly gaps in the kitchen processes. Pete remembers one night “chucking out about 5kg of vegetables, which a chef admitted they could have incorporated into that night’s meal, but it was too much work”. That’s not in any way to blame kitchen staff, but rather the University “structures [that] made sure no one really wanted to deal with food waste”.

Finally, where appropriate, donate surplus food to agencies like KiwiHarvest. Food waste is bad enough for the environment, but it’s even worse that it’s occurring in the face of widespread New Zealand poverty.

Pete said in 2018 his hall decided to bring in a system of weighing food waste, which would then go to a pig farm. Yet he said a supervisor would often tell the workers to just "guess the weight” and, if the waste on the heavier side, to “make it lighter” in the records. At times he was told to chuck out trays of food without adding it to the food weight total. When the Uni got wind of the fact that Critic was looking into food waste, they "alerted all head chefs/executive chefs at the halls about it” and staff were “told not to talk to anyone about food wastage,” according to one kitchen hand. It’s all a little bit shifty.

Obviously no one wants food waste - it benefits fuck all. I shudder at thinking the cost to the University of sending all that food to landfill. I can barely afford to buy a DCC rubbish bag (the rats are coming, please send help - unless they’re cute like the one from Flushed Away). Within the next two months, the University is set to trial a composting machine that will “break the food waste down using microbes, turning it into a usable compost slurry” that will then be used by the University garden maintenance team. This is a really good start, but one that deals mostly with the consequences of waste, not the creation. When asked what other plans the University has in the near future to help with kitchen food waste, we were told that “education to our residents on taking only the amount of food they can consume, is ongoing. We are improving our education posters, highlighting the ideal portion size, and the food pyramid.” So, I guess you’re going to be seeing a lot more posters kids. Have fun with that. Hope it helps and all.

It’s clear that programmes like KiwiHarvest can work in halls of residence, but think of how much good it can do to stretch that programme to 10 halls rather than just one. Or hell, just let employees take some food home to their flatmates. Or feed it to students; it’s not my job to figure out the logistics, it’s just my job to whine. Food waste is a problem, but it’s a preventable problem that requires more focus from the University. Oh, and if the residential colleges accidentally make too much of that scrumptious tan slice, they know where to find me.

*Names have been changed because no one wants to get fired :)