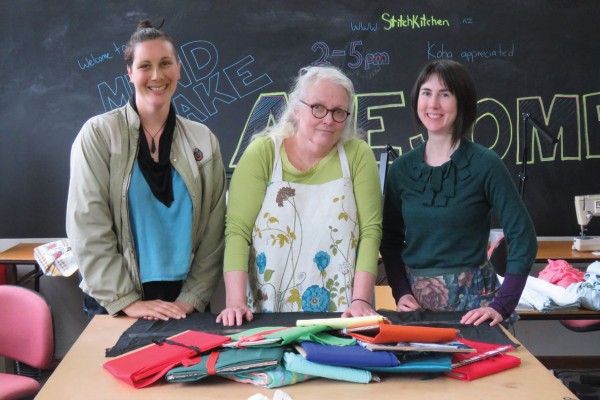 Stitch Kitchen: a Local Solution to a Global Problem

Fast fashion is an issue that is so big it sometimes feels hopeless. So much so that in first year after I watched a Netflix documentary called The True Cost I swore a silent oath that I wouldn’t buy any new clothing for a year.

The good news is that there are lots of things you can do to minimise your own fashion waste, without having to sell your soul to Marx.

One local social enterprise who are doing great things in the community is a non-profit called Stitch Kitchen. Since 2014, they’ve been running a sewing studio out of their Vogel Street premises; they seek to empower individuals to minimise textile waste by helping people find ways to re-use their textiles. They run a bunch of cool programs in the local community that teach beginners how to sew, darn and mend their clothing, including lessons for students at OUSA alongside programs for the more advanced. They also have a swap shop where you can exchange your textiles and materials. I sat down to speak with chair, Fiona Clements (Fi), Project Coordinator, Fiona Jenkins, and trustee Desi Liversage, about fast fashion and what Stitch Kitchen do to counter it.

“To slow down the industry we need to change consumer behaviour and expectations where they believe they have an innate right to purchase new things,” said Project Coordinator Fiona. “We can get inundated with this global corruption and lack of ethics, but we bring it back to what can we do about it on the local level. That’s where we spent a lot of time brainstorming how we can act in the most practical base-level ways,” said Fiona.

As a result, Stitch has a five-step approach to minimising garment waste, the first being to wash your garments with care. “70% of the clothes we throw away are due to washing. Being careful about your laundry choices is something small that you can do,” said Fiona. Looking at the labels of your clothing for the washing instructions is really simple, she said. So separate your whites and your darks, kids. The second step is to mend and upcycle stuff, which is a huge part of what Stitch Kitchen does. When you inevitably start getting holes, you can mend them and maximise their worth. The third is shop your wardrobe and see if you can put together something you already own, with 40% of the clothes we own never being worn. The fourth is swap and shop second hand, or hire something. Fiona admits that students are “already pretty good at shopping second hand and op-shopping and all that, with the Polytech doing an annual clothing swap each year in aid of Rape Crisis”. The final step is buying less and buying natural, with wool, linen and organic cotton being favourable materials. “With this kind of approach people can go, ‘I already do that, tick’, and when they tick a box they are more likely to do the next thing. It’s about incremental steps.”

Stitch Kitchen also talk about the limitations currently in New Zealand when trying to recycle and upcycle textiles. “There is this idea that 95% of clothing that is thrown away can be recycled or upcycled, but that is a UK statistic. In New Zealand, our capacity is less than this. The idea of recycling can be that the infrastructure is there but, just like plastic, there is no market for it once it has been recycled,” said Fiona. NZ doesn't have textile-recycling infrastructure. Cotton can be shredded and then reused as industry rags once, but they still end up in landfills. A limited amount can go to Australia, where they are able to break down poly-cotton and polyester blends which can then be made into plastic, but that's not here.

Desi said that it all goes back to buying with care. “Don’t buy that fabric. Who wants to wear a plastic bag? Yet still 65% of clothing bought in NZ is synthetic.” The women at Stitch Kitchen agree that sometimes you have to buy first-hand, like socks and undies, but they urge you to look for ones that are 100% natural fibre; something you can put into your compost bin.

While it’s easy to think of fast fashion as something happening in big factories overseas, the reality is that it is affecting us here and now. Stitch Kitchen said that 4,000 tonnes of textile waste in Dunedin goes to the Green Island landfill each year. To raise awareness of this, they launched a project called 4KT elephants, a project that upcycles old clothes and textiles into 4000 soft toy elephants.

While the issue can sometimes seem hopeless, Fiona stresses you can focus on individual efforts. “If your concerns are about child labour and women’s rights abuses, one helpful thing you can do is reduce your demand for the products that are produced by that means.”

Through Stitch Kitchen’s classes and community projects, they aim to motivate consumers to ask and demand who made their clothes. “It’s about transparency, so we know what conditions the clothes were made under and so that consumers can make informed decisions,” said Desi. “Fast fashion isn’t free; somewhere someone is paying for it. The workers, or the designers are having to pay for it.” They told me that if we just added 50 cents to the cost of fast fashion garments, all those workers would be getting a living wage in their country. “It would cost us such a little amount in that time, yet no one is prepared to do it,” said Fi.

Stitch Kitchen aims to get people thinking creatively about fashion in regards to repurposing and recycling. “It’s about being curious, finding out and doing something,” said Fi. It’s easy for people to assume that their actions have little value when faced with a global issue such as fast fashion, but the reality is that our actions have real power; it’s just about being informed and being proactive